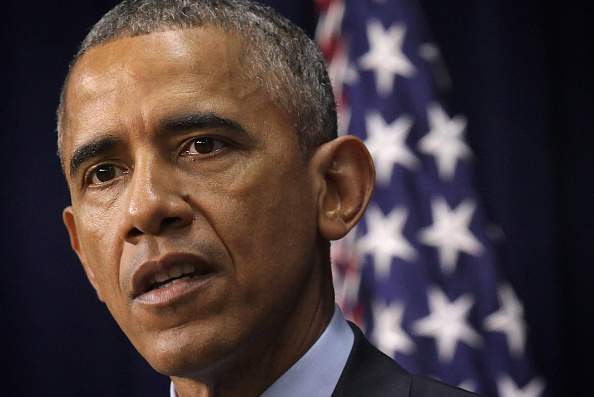 If you watched Hussein Obama (yes, this is intentional since this man wants to act like a dictator) speak in the wake of the terror attacks in Paris, you heard him chastise the use of a religious test to admit individuals into the united States who are supposed “refugees.” In light of the Paris attacks by unvetted Muslim invaders, many in the US have suggested that our nation only admit Christians since the ideology of Islam is antithetical to Western culture. Obama declared there has never been a religious test nor would there ever be a religious test. However, we know this is a lie as the Obama administration itself has admitted more unvetted Muslim invaders into this nation than Christians from the war-torn Middle East.

NewsMax reported on a story appearing in the Washington Free Beacon indicating that since October, the Obama administration has only admitted 5 Syrian Christians into the united States and since January, admitted 1,875 Syrians into the US , with only 30 being Christians. Syrian Christians make up 10 percent of the population of Syria, yet, represent only 1.6 percent of Syrian “refugees” brought to the US on the taxpayer dime. Fiscal year 2016 began October 1. According to the Washington Free Beacon, “The World Refugee Admissions Processing System (WRAPS), which tracks refugee settlement, reports that three Syrian Catholics, one Christian, and one Orthodox believer have arrived in the united States since the 2016 fiscal year began in October.”

If anyone needs reminding of Obama’s statement, here it is.

Naturally the State Department has a plausible explanation for the disparity, since the White House refused to address this information. An unidentified State Department spokesperson (don’t you just love these guys?) told the Washington Free Beacon, “We can’t predict exactly who [among a refugee population] is going to apply.” Of course, the official department policy is to not take religion into consideration when determining refugee admittance; however, persecuted religious populations can receive preference.

Persecuted religious population can receive preference when the State Department determines refugee admittance. Christians are being systematically exterminated in the Middle East, the birthplace of Christianity. Not only are Christians being murdered, Yazidis, Kurds and other ethnic and religious minorities find themselves in the crosshairs of ISIS because of their beliefs. So, the question is, if persecuted religious populations can receive preference, why have Christians not been making the cut?

Again, this unidentified States Department spokesperson said, “The emphasis of our refugee admissions program is on helping the most vulnerable. Many of those we are currently assisting are Christians, Yezidis and other religious and ethnic minorities from Iraq and Syria. It is unclear how many Christians have left the country. However, it is estimated that they make up a small percentage of the Syrian refugee population. UNHCR identifies refugees for resettlement based on vulnerability, which may include belonging to a religious or ethnic minority.”

Did you catch that? Let’s look at what this “unknown” State Department spokesperson said.

Many of those we are currently assisting are Christians, Yezidis and other religious and ethnic minorities from Iraq and Syria.

From this statement, the Obama administration, as well as the State Department, appears to know the religious persuasion of those they assist. And, the State Department under Obama recognizes Christians, Yazidis and others as “religious and ethnic minorities.” If the commitment is to “help the most vulnerable,” who is more vulnerable than a religious group(s) being systematically murdered?

It is unclear how many Christians have left the county; however, it is estimated that they make up a small percentage of the Syrian refugee population.

What does this have to do with the price of eggs in China? It doesn’t matter how many have left already. What matters is the group is a religious minority ISIS is murdering into extinction in the Middle East. If the population is small, it means ISIS has exterminated this group to low population levels. It is evident in all media coverage that Christians are being persecuted and murdered for their religious beliefs by ISIS. But, Christians are not receiving “preference” by our State Department as the “unknown” spokesman for the Department claims.

UNHCR identifies refugees for resettlement based on vulnerability, which may include belonging to a religious or ethnic minority.

And here it is folks. The true reason Christians are not being given preference. The “UNHCR identifies refugees for resettlement” into other nations, not the nation itself based on the nation’s laws. As former ambassador to the UN, John Bolton, pointed out, the US is under no obligation to take refugees; and, resettlement is the solution of last resort as the first is repatriation back to the country of origin — a solution the UN itself declares in its 1951 Convention documents, but has chosen to ignore and make resettlement first. The United Nations is in violation of the rules of the Convention, meaning the contract has been broken so any contract nation need not adhere to its tenets.

In looking at Europe’s invasion by Muslims, this administration, Obama Hussein, the United Nations and European leaders are lying through their teeth. These are not widows and orphans. These are not refugees. These are young Muslim males of military age in good health storming across Europe wreaking havoc, committing crimes and disrupting public order. They are invaders, not refugees.

The invasion of Europe is contrived by the backers of ISIS (read Hussein administration), the European Union, the wealthy bankers, and the United Nations for a purpose — destroy European nations, replace their culture and enslave the people. None of this is about “protecting” the persecuted. It is about bringing those who persecute into the West.

The UNs own documents indicate that resettlement is the solution of last resort; yet, this is the solution of first resort as this invasion force had to pass through other nations before even getting to the Mediterranean to cross into Europe. The first country the “refugee” enters is considered the country of first asylum, which has responsibility for shelter, food, medical care, etc. The entire 1951 Convention tenets have been violated by the United Nations, meaning no contract State should be held to uphold any provision of the convention.

From the unknown State Department spokesperson, “the UN identifies refugees for resettlement.” When did the UN identify this mass invasion force as “refugees” to resettle into Europe and notify any contract state before these people hit the shores of Europe? All reports indicated mass numbers of people crossed the Mediterranean, which the media and nations dubbed “migrants” or “immigrants.” Only after many European nations voiced opposition did the UN declare these cretin invaders as “refugees.”

When are the sheep going to “wake the flock up” as the Daily Sheeple‘s meme suggests? As it stands, a Bloomberg poll indicates two thirds of Americans are opposed to the resettlement of Syrian refugees entirely or only accepting Christians. And, rightly so in light of the Paris attacks, ISIS being identified as an enemy of the united States, and the inability of our State Department to thoroughly vet these individuals.

Why are sovereign nations’ leaders succumbing to the whims of the United Nations? Why are the nations’ leaders assisting in the destruction of their own culture and citizenry? These are the 64 million dollar questions that most can answer but the majority of our nation refuses to honestly believe the answer. This is the cognitive dissonance among the population that will usher its downfall, along with the cancerous disease known as liberal multiculturalism.