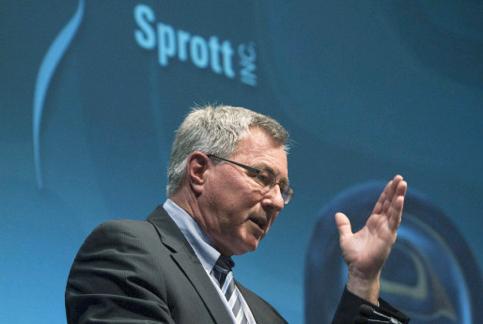 If the government’s official statistics are to be believed the U.S. economy is moving full steam ahead. Consumers are spending, the job market is expanding, real estate has recovered, stocks are soaring and the U.S. dollar is stronger than it has been in a decade.

But if you have yet to realize it, it’s all a lie. So says billionaire investor Eric Sprott of Sprott Global, which manages hundreds of millions of dollars in contrarian investment funds for clients all over the world. Well known for his long-term bullishness on the resource sector, specifically precious metals, Sprott joined First Mining Finance chairman Keith Neumeyer in a must-see interview where the pair discussex everything from the state of the global economy and trade to gold market manipulation and the inevitable breakdown of highly leveraged paper trading exchanges.

Neumeyer recently sent a very public letter to the Commodity Futures Trading Commission highlighting rampant price suppression, noting that neither real producers or real consumers are being represented by the manipulative practices of a small concentration of players. Echoing those concerns Sprott suggests that for every 5 tons of real gold there are some 1500 tons worth of claims. The inevitable outcome should claimants ever want to take delivery of physical inventory will be an unprecedented explosion in price:

To be brutally honest, I mean, that’s what I dream of… I think we’re almost at that point where we might very well have a shortage of gold and silver by a product of this last raid here, so much so that we’ll take those 5 tons from the COMEX because we have lots of people buying silver and gold.

The manipulation of precious metals, coupled with the supply and demand fundamentals which Sprott says will lead to shortages over the next few years as mining companies reduce output or close up shop, will leave many investors who think their gold holdings are easily convertible to physical assets with nothing more than depreciating Yellen Bucks at exactly the moment they’ll need precious metals in their possession.

Everything says to me that the demand for gold is in excess of the supply. And, of course, you wonder why the price would go down, but people look at the COMEX which stays manipulated, which is so obvious to me what’s going on. We have 5 tons of physical gold. We have something like 1500 tons of claims against that 5 tons. So to be quite direct about your question, yes, I kind of wonder any day, is somebody going to snatch those 5 tons of gold, and we end up with some kind of cash settlement. But then you have to think, if we would have a cash settlement, having taken gold from 1900 down to 1100, all under the threat of a rate increase for the last 5 years, which has never happened and may not ever happen, and then all of a sudden they’re like “well, really there is no gold here, we’ll just cash settle it at $1,100.” Meanwhile, we’ve lost $800 on a false claim. And perhaps maybe people in the know know about this, they keep the price of precious metals suppressed because they are the canary in the coal mines.

A canary in the coal mine, indeed:

There’s no way we should have a strong dollar here. We haven’t even begun to deal with the issues that are facing the U.S. public, i.e., Social Security, Medicare, everything so far is a lie.

I mean, I can’t believe inflation’s 2% when pretty well every individual in the U.S. just on their healthcare policy, just on that policy alone, their cost went up 2% a year. On everything. Just on healthcare, because it’s probably 20% in healthcare, you get a 10% increase, that’s a 2% increase. So whether or not anything else goes up, there’s a 2% increase. And they don’t throw in grants and education and all those other things that are going up. Inflation numbers are massively understated, everything’s a lie.

I don’t believe the jobs report from last Friday, the ADP number, it’s all a lie. And I sort of ask why do they have to lie about everything? Well, you know why they have to lie about everything… Because we don’t have an economic recovery happening, and they’ve got to pretend there is one. And so when you get these funny numbers that come out that suggest we have strength when deep down you know there’s no strength. Look at the truckloads, the rail car load increase, the cost of chartering a ship, the Baltic rate, they’re all going to new lows here.

Knowing full well that we’re dealing with a lie so big that its eventual consequence will lead to bewilderment and widespread panic among the general global public once it becomes common knowledge, one should be asking: what do I do now?

Keith Neumeyer, whose company has been rapidly acquiring distressed assets in the precious metals mining space, provides an insightful and actionable answer given what we know about what’s coming:

As Eric said, the valuations now are quite laughable. As well as many people know, I’ve been in this market for a while. I’m not sure if Eric has seen these valuations before but in my 32 years of being in it, I don’t recall ever being able to buy a drilled ounce of gold in the ground for less than $10 an ounce.

Not one of these transactions could have occurred in a normal market — the costs would have been just much, much higher and just unaffordable.

And then on a personal note, as I’ve said a couple of times to some good friends, I’ve just recently sold my last piece real estate and I’m putting all that money into this sector. I’m going all-in, I think this is “back up the truck” time, this is a once-in-a-decade opportunity, and I’m putting my money where my mouth is.

Though the market price has yet to reflect it, Eric Sprott and Keith Neumeyer are being joined by scores of billionaires and investment funds that are positioning themselves in the gold and silver markets.

They know what’s coming. Unfortunately for the majority of the populace, it’ll be too late by the time they realize it too.