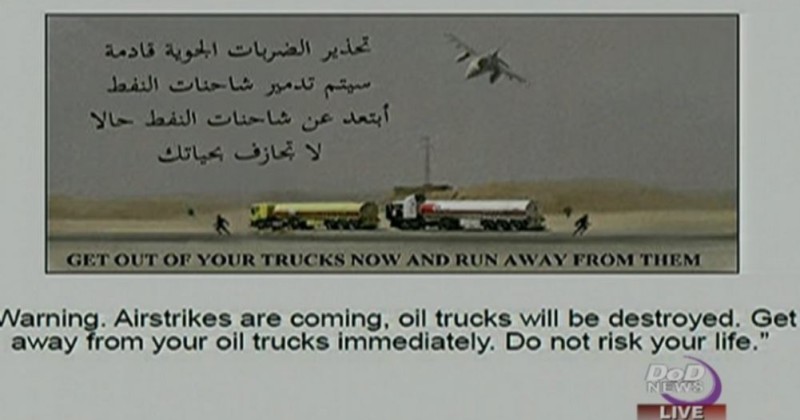 Why did it take 15 months for the U.S. to target the Islamic State’s oil infrastructure? 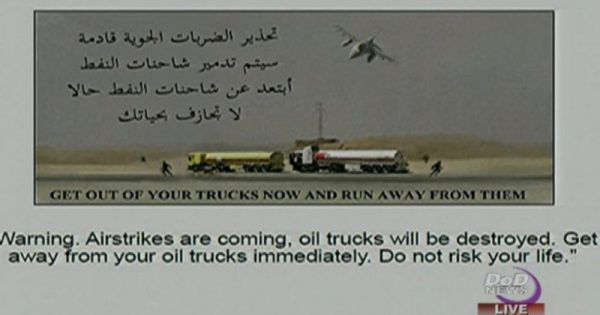 The Obama White House is giving ISIS a 45 minute warning before bombing their oil tankers by dropping leaflets advising potential jihadists to flee before air strikes in Syria.

“Get out of your trucks now, and run away from them. Warning: air strikes are coming. Oil trucks will be destroyed. Get away from your oil trucks immediately. Do not risk your life,” the leaflet reads.

The leaflet drops are justified under the premise that the oil tanker drivers might be civilians and not ISIS recruits, although it’s an explanation that doesn’t wash with critics.

“It’s not like these drivers are innocent, uninvolved “civilians” like children or sick people,” writes J.E. Dyer. “They’re waging ISIS’s war, just like the other non-uniformed participants who make up 100% of ISIS’s ranks. This is how far the Obama administration is going to avoid “collateral damage” — and who knows, it may be worse.”

FrontPageMag’s Daniel Greenfield makes a similar point, commenting, “So after all this time, they came up with a great plan; drop flyers on ISIS trucks so that the drivers, who may or may not be ISIS members, can run away in time. Meanwhile ISIS gets 45 minutes of warning.”

Compare the Obama White House’s approach to fighting ISIS to that of Russia.

While it took the U.S. fifteen months to even begin targeting ISIS’ oil refineries and tankers, air strikes by Moscow destroyed more than 1,000 tankers in a period of just five days.

In comparison, Col. Steve Warren said that the U.S. had taken out only 116 tanker trucks, the “first strike” to target ISIS’ lucrative black market oil business, which funds over 50 per cent of the terror group’s activities.

U.S. air strikes targeting ISIS oil assets are so rare that PBS was caught using footage of Russian fighter jets bombing an oil storage facility in Syria and passing it off as evidence of the U.S. targeting the Islamic State’s oil infrastructure.

U.S. military pilots have also confirmed that they were ordered not to drop 75 percent of their ordnance on ISIS targets because they could not get clearance from their superiors.

“You went 12 full months while ISIS was on the march without the U.S. using that air power and now as the pilots come back to talk to us they say three-quarters of our ordnance we can’t drop, we can’t get clearance even when we have a clear target in front of us,” said House Foreign Affairs Committee Chairman Ed Royce, R-Calif, while retired four-star U.S. general Jack Keane labeled the policy ” an absurdity from the beginning.”

Earlier this year a document emerged confirming that the Pentagon foresaw the rise of ISIS and that western support for Al-Qaeda groups and other anti-Assad rebels in Syria would lead to the emergence of a “Salafist Principality” that would help to “isolate” Assad.

“The bottom line – the almost irrefutable truth – is that the US and its regional allies were all-in on the “use Sunni extremists to bring about regime change in Syria” strategy from the word “go”, and the direct result of that strategy is ISIS,” reports Zero Hedge, adding, “The US didn’t want to cut off Islamic State’s funding, because without money, the group couldn’t fight Assad.”

The New York Times is also reporting that US Central Command may have engaged in a year long effort to deliberately conceal the fact that the United States’ plan to demolish ISIS was not effective.

Evidence also continues to emerge that ISIS is receiving support from state sponsors of terror like Turkey and Saudi Arabia.

$800,000,000 worth of ISIS oil has been sold in Turkey, a supposed U.S. ally. ISIS trucks are routinely allowed to cross back and forth between the Islamic State stronghold of Raqqa and Turkey, while the NATO country facilitates black market oil sales on behalf of the terror group.

As Nafeez Ahmed documents, a large cache of intelligence recovered from a raid on an ISIS safehouse this summer confirms that “direct dealings between Turkish officials and ranking ISIS members was now ‘undeniable.’”