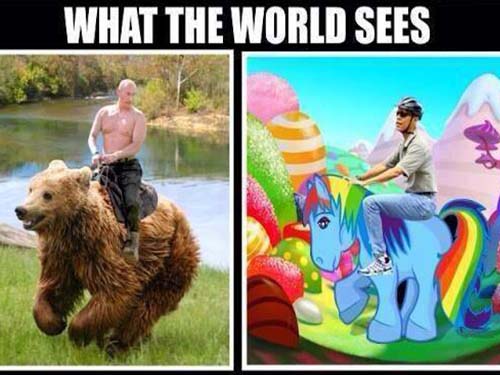 Over the weekend at a press conference in Kuala Lumpur, President Obama called out President Putin in regards to making a decision as to whether or not Russia would continue to support the Assad regime in Syria.

“I’ve said this before; I said it to President Putin five years ago and I repeated it to him just a few days ago — the issue with Assad is not simply the way that he has treated his people.  It’s not just a human rights issues. It’s not just a question of supporting somebody who has been ruthlessly dropping bombs on his own civilian populations. As a practical matter, it is not conceivable that Mr. Assad can regain legitimacy in a country in which a large majority of that country despises Assad and will not stop fighting so long as he’s in power, which means that the civil war perpetuates itself,” Obama said.

He continued, “Russia has not officially committed to a transition of Assad moving out, but they did agree to the political transition process. And I think we’ll find out over the next several weeks whether or not we can bring about that change of perspective with the Russians.”

The mainstream press ran with headlines like “Obama Says Russia Faces Strategic Choice as Assad Can’t Stay,” but the reality is, this is an ultimatum. Obama is calling out Putin over Syria, regardless of whether or not he’s in a position to really do so, is he?

What would happen if, say, President Putin made a statement that Obama could not regain legitimacy and thus, he had to go? Where does Obama get the power to declare when other heads of state must be removed and when did America openly declare themselves as ruler supreme of the regime change business?

President Obama also somehow still maintains that Russia has not been striking the Islamic State but the moderate opposition forces backed by the West (opposition forces which arguably do not exist).

Meanwhile, over the same weekend, Russian Prime Minister Dmitry Medvedev said that it was U.S. policies in the Middle East which helped the rise of the Islamic State in the first place. Considering this now declassified 2012 Defense Intelligence Agency memo released to Judicial Watch earlier this year via FOIA request essentially says the same thing, in this case Medvedev is absolutely right.

That same memo also proves that the U.S. government was well aware back in 2012 that the West’s backing of the “opposition forces” in Syria could lead to a proxy war in the region against not only Russia, but China and Iran as well.