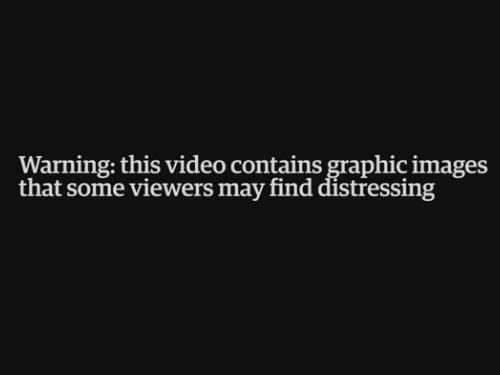 The video of 17-year-old Laquan McDonald being shot 16 times and killed by a Chicago police officer who has now been charged with first-degree murder has finally been released over a year after the teen’s death.

Initially, Officer Jason Van Dyke claimed the teen lunged at him, but the video clearly shows this is not the case. McDonald is walking off in the opposite direction of Van Dyke, at least a dozen feet away. After McDonald is dropped by the initial bullet, he’s down. That’s it. Van Dyke just keeps shooting and shooting and shooting. The video shows McDonald’s limp body jumping around on the pavement after each shot.

WARNING: This footage is graphic. Viewer discretion is advised.

Protesters have been waiting in the wings for this video to be released, and have already begun marching on Chicago, closing down several streets.

Chicago Mayor Rahm Emanuel is calling for peace (since we all know what a peaceful guy he is), but it’s not likely to come any time soon to a city where the police are so utterly above the law, and so utterly corrupt above and beyond even the rest of American cops, that they are somehow magically allowed to operate a Constitution-less black site where they disappear suspects for days without any regard for their rights…