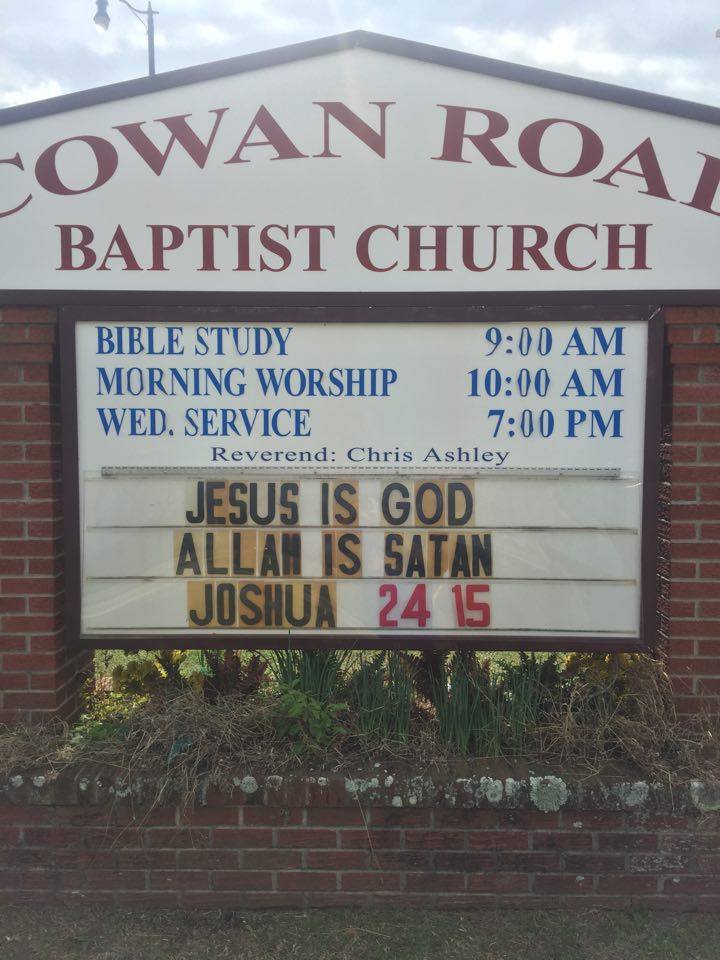 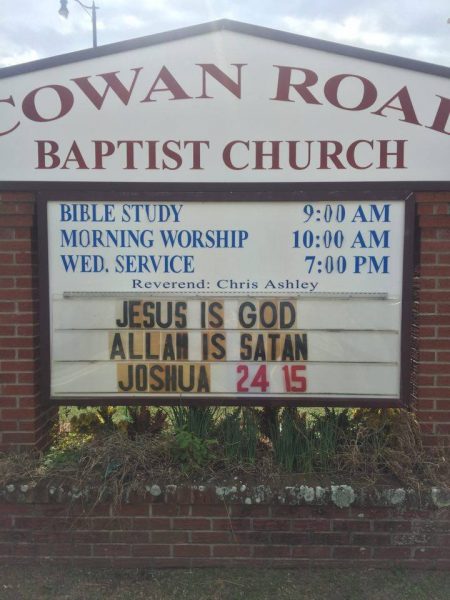 It’s quite rare to be part of a story on which I report, but this time, I’m at Ground Zero. My church in Gulfport, Mississippi, Cowan Road Baptist Church, is the center of a growing story. In the wake of the horrific slaughter of at least 130 people in Paris by Muslim demoniacs, our Pastor, Chris Ashley, put a message on our church sign: “Jesus is God; Allah is Satan,” and below that, he added, “Joshua 24:15.”

It didn’t take long for Muslim spokesmen here on the Coast to voice their offense at it, and the local media have featured the offended Muslims on their newscasts. They have also interviewed Pastor Chris, as well, and as a result, there will be a debate showdown on December 5th. As WLOX-TV reported on Sunday:

Conversations of the marquee isn’t [sic] just on the coast, but Muslim followers as far as Atlanta have reached out to Pastor Ashley about what’s on display.

Pastor Ashley has called Mr. Bilal Stroud back to accept his debate challenge. They have both agreed to meet with people from their communities, Saturday, December 5th at 6 p.m. at Cowan Road Baptist Church.

The debate will be public and streamed online. We’re going to continue to follow this controversial story and bring you the latest.

I asked Pastor Chris if he would give me a statement to include in this column. Here is what he wrote:

God laid it on my heart less than 30 minutes before the beginning of that service to proclaim that Allah of the Quran is Satan, and that Jesus is the true God. I did. Finishing the sign just minutes before the service. No malice. No judging (except for Allah and Satan). No hatred. Just obedience.

I have NO idea why God has put me (of all people) to be in this, but my prayer is to be obedient until the end. I humbly ask for your prayers as well.

On a different note, I believe God has shown me over the last several days that my part of this message may not be for the Muslim people as much as it is for Christians. I am AMAZED at the number of self-proclaimed believers who think the God of the Bible and the god of the Quran are the same. May God bless you all.

I love and admire Chris Ashley, and I thank the Lord that he is my pastor and brother in Christ. He is a leader, a truth-teller, and he is courageous. Courage is contagious. If hundreds or even thousands of Christian churches across America had the courage to put this message on their signs, Muslim activists, along with the truth-hating, left-wing media, would have a hard time keeping up their attacks against those of us who speak the truth.

What Pastor Chris wrote about Jesus and Allah is true. Islam is a political-militant ideology born in Hell and authored by Satan himself. Allah certainly is Satan. Islam is one of his master stroke creations, leading millions to an eternity in Hell. I will not bow to political correctness in this. I will not sugar-coat what I say about Islam, because I know what a vile and evil thing it is.

A tenet of Islam is taqiyya, which is lying for the sake of Islam’s spread. We cannot trust a word they say. The obscene murders committed by soldiers of Allah are commanded in their detestable Koran! And, apologists for Islam lie and claim those murders have nothing to do with Islam. All rational people know better than that!

Jesus is God, and He is the only way—the ONLY way—men can be saved. Muslims need Him. We all need Him. Those of us who know the truth must stand firmly against the Islamic caliphate that is sweeping across Europe and the United States. Barack Obama (or whatever his name is) is facilitating it. He is on the side of our sworn, Muslim enemies, who are subversives who want to destroy our constitutional Republic, who want to kill us and enslave us under their demented Sharia law. Those are Obama’s buddies. We must resist. We must not be afraid to tell the truth about Islam and its murderous, tyrannical goals. Islam is evil, period.

I look forward to the debate at our church on Saturday evening, December 5th. If you are in the area of Gulfport, MS, please try to attend. Otherwise, the debate will be streamed live on the Internet and available for replay. You can check our church’s Facebook page for details on where to see it online.

Finally, please remember Pastor Chris Ashley, his family, and our church in your prayers. Pray that he will stand boldly in the face of the shrill voices screeching and lying about the truth he speaks. Pray for our safety, and pray that other Christian churches will begin to be unafraid to stand for the unbending truth of God’s Word. This nation desperately needs a flood of truth to wash over it.