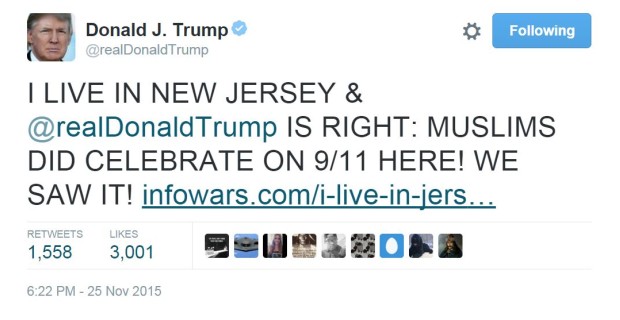 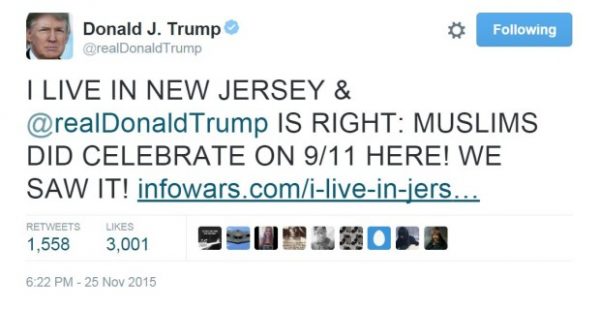 Liberals went into meltdown Wednesday night after Donald Trump tweeted an Infowars link to a story about how Muslims in New Jersey allegedly celebrated the 9/11 attacks.

After days of the mainstream media accusing Trump of lying about the assertion that he saw news reports about Middle Easterners celebrating the terrorist attack on the World Trade Center, the Republican presidential frontrunner cited a Washington Post story from September 18 which appeared to at least partially prove the claim.

But that didn’t satisfy the “fact checkers,” who continue to insist that Trump is being disingenuous. Fast forward to Wednesday night, when Trump tweeted out a link to an article posted on Infowars in which the writer, who drove through New Jersey on 9/11, asserts that she, “Witnessed people in traditional Muslim garb dancing, jumping, shouting and celebrating like their team had won the Super Bowl, just as Trump said.”

Other people who were in New Jersey and New York on the day of the attacks also tweeted out their eyewitness reports of Muslims celebrating 9/11 under the hashtag #TrumpIsRight.

The mere spectacle of Trump tweeting a link to Infowars caused a sudden outbreak of cry-baby butt-hurt on behalf of liberals the likes of which the Internet has never seen.

Gawker devoted an entire article to the egregious act with the headline Trump Tweeted an InfoWars.com Link and the Election Is Still 348 Days Away.

After we began trending, Twitter exploded with leftist rage at ‘The Donald’ daring to link to Infowars, with one cry-baby describing us as, “a site by paranoid idiots for paranoid idiots.”

Others (including me) pointed out the hilarity of people being so upset over a tweet.

Laughing at those bashing Trump for an Infowars article. These clowns have no clue how huge of an audience Infowars has, & the work they do.

Progressives triggered by Trump linking to Infowars: Hold on, you're not alone. Everything's gonna be OK. https://t.co/G17zNbzmHV

The University of Missouri is offering free counseling to anyone triggered by Donald Trump tweeting Infowars. #TheTriggering

Most of the attacks on Infowars also failed to recognize the fact that the article wasn’t even an Infowars story, it was a re-post of a BizPacReview piece by Carmine Sabia.

This is not the first time that Trump has referenced Infowars. During a speech earlier this year, he also cited an exclusive Infowars video which showed Mexicans smuggling drugs into America.