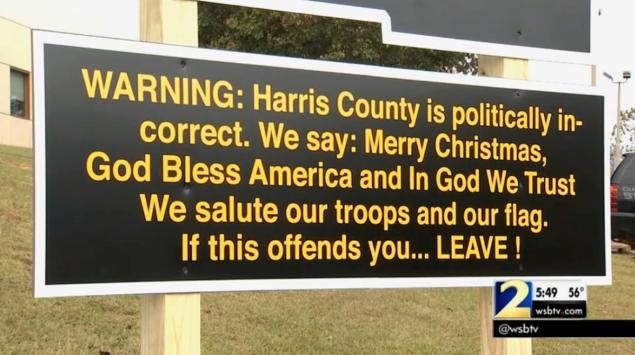 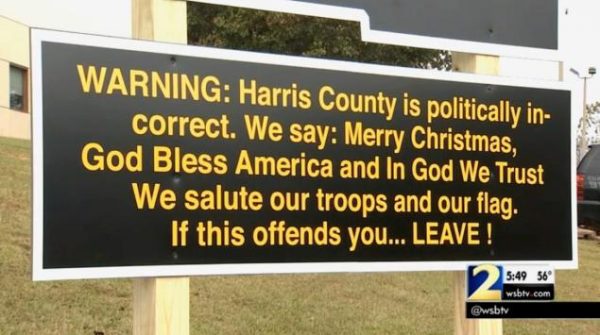 “WARNING: Harris County is politically incorrect. We say: Merry Christmas, God Bless America and In God We Trust. We salute our troops and our flag. If this offends you… LEAVE!”

The Sheriff of Harris County, Georgia, Mike Jolley, is a firm believer in traditional American values and patriotism. He proved this recently when he used his own money to commission a sign that he placed outside the Harris County Sheriff’s Office that trumpeted his county’s support for our nation, our troops, our faith and being politically incorrect.

The sign reads: “WARNING: Harris County is politically incorrect. We say: Merry Christmas, God Bless America and In God We Trust. We salute our troops and our flag. If this offends you… LEAVE!”

Jolley told the local newspaper that he’d seen nothing but support for him and his sign since he put it up. In fact, some supporters have even shown their support in a monetary fashion.

“The sign has been purchased double. I’m humbled by all of the support. Surprised and humbled by it. Maybe the silent majority isn’t going to be silent anymore.”

In fact, Jolley posted the sign in hopes of stimulating exactly that conversation. “It’s time for the silent majority to stand up for our beliefs and not be ashamed.”

The sheriff has faced some criticism from others who believe he may be cultivating a hostile workplace for non-Christians. Jolley laughs off the idea saying, “They’re more than welcome to worship whatever God they choose fit. For me and mine, we worship Jesus Christ.”

When asked what he hopes to achieve by posting the sign outside his office, Jolley says,“Coming up on Thanksgiving, maybe somebody will be thankful for something we have…”

Harris County is fortunate indeed to have a man like Mike Jolley at the helm of their law enforcement. That in and of itself is something to be thankful for. Let’s all offer our support for Jolley and Harris County as they’ll no doubt face some stiff opposition in the coming months as the anti-God forces of liberalism, political correctness and fascism start pressuring them to tear down their sign. Here’s hoping they have the guts to stand strong for what they believe… and for what we believe.