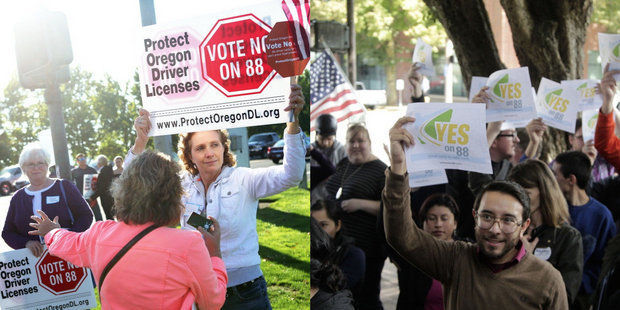 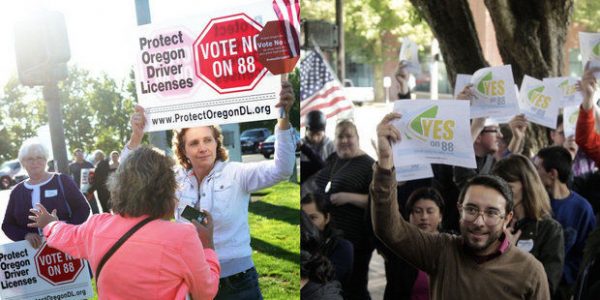 We are finding that though common sense was never that common in the first place, it has become less so over the last few years. When we have people making statements like, “We are going to make it against the law to be an illegal Immigrant,” one might think that we were playing with the little brains we have left. But now we are going one step further.

A group of Mexican immigrants is suing to reverse a decision by Oregon voters on a 2014 ballot measure that prevents undocumented immigrants from getting Oregon driver cards.

In a lawsuit filed Wednesday in U.S. District Court in Eugene, the plaintiffs said the outcome of Measure 88 is unconstitutional because it “arbitrarily” denies driving privileges “to Plaintiffs and others based on their membership in a disfavored minority group.”

Gustavo Recarde, who has worked construction and odd jobs in Portland and several states since sneaking into the United States in 1988, said a driver’s license would help him feel more comfortable here and open doors.

“If an illegal [can] get a driver’s license, it would be better because there’s more opportunities to find a job as a driver,” said Recarde, who is not part of the lawsuit. He said he believes race played a role in the vote.

The idea that this is a racial issue is a little hard to swallow. It should have nothing to do with race, and everything to do with the law. It is against the law for Recarde to be in this country, much less hold a job. He is working here illegally. And I am not alone in this way of seeing the issue.

But Cynthia Kendoll, president of Oregonians for Immigration Reform, said it’s not the responsibility of Oregonians to make illegal immigrants comfortable or able to drive to jobs they don’t legally have.

“They came here by choice, they weren’t brought here against their will, and with those choices come hardships,” she said.

Not only that, but we have to remember that this was not even a close issue in Oregon. The people came out and supported the idea that people who were here illegally should not have the privilege that comes with being a citizen of Oregon.

The lawsuit comes nearly a year after Oregon voters resoundingly defeated Measure 88, which would have directed the Oregon Department of Transportation to issue driver cards without asking for proof of U.S. citizenship. The measure failed in the Nov. 4 election with a two-thirds no vote.

“It was an overwhelming rejection of giving drivers’ licenses to illegal aliens,” said Jim Ludwick, communications director for Oregonians for Immigration Reform. “but somehow that doesn’t apply to people who are here illegally and think the law doesn’t apply to them.”

It seems unlikely that there is a chance that this will turn out good for the plaintiffs. Most federal court judges refuse to overturn state laws that have been voted on by the public. And we would hope that this is simply a no-brainer.

Besides that, there is the question of why. Why bother with this at all? I mean, these people are already breaking the law. So are those who are hiring them. Why not break the law and drive? Because, with a legal driver’s card, the illegal is more likely to pass as a legal immigrant and get a better job. Maybe even vote.