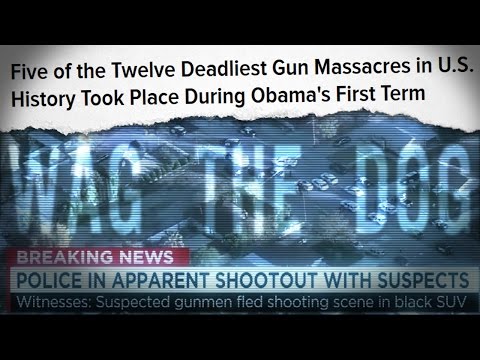 It’s amazing how much we see and how much we forget. Mass shootings and mass murders are nothing new. However, under Barack Hussein Obama, both have increased exponentially when we view the numbers in light of previous occupants of the Oval Office. In fact, when it comes to mass shootings and mass murders, more have occurred under the Marxist-in-chief than the previous four presidents combined.

While the administration and the Democrat National Committee Chair have been throwing out overblown numbers regarding mass shootings, the reality, though still disturbing, is nothing like what they have been presenting.

Using information compiled via a database with incidents, fatalities and injuries from real mass shootings in the united States, take a look at the real numbers under Hussein versus our previous four presidents, and remember, unless Congress does its duty and removes this guy from office, he still has over one year left!

The data was compiled by TruthStreamMedia.com via several sources. To put things in perspective, take a look at the chart below regarding the number of mass shootings under these presidents.

That isn’t all, TruthStreamMedia also produced the following chart that shows in the listed shootings where there were eight or more people killed.

As Aaron and Melissa Dykes point out, “Obviously this isn’t so easily simplified as more guns in the hands of more crazy people, the way the media likes to spin it. We have more gun laws now than ever before. Less types of guns are legally available to the average citizen than ever before. We also have more ‘gun-free zones,’ zones where, just by the way, most of these shootings happen (because mass shooters do not follow laws or care about zones, obviously). So that’s not it.”

While the Dykes have talked about pharmaceutical use playing a part in these shootings, and we have too, there seems to be something else going on here, especially when you consider that five out of the 12 deadliest mass shootings in American history occurred in Barack Hussein Obama’s first term! That’s almost half!

For those who understand his Saul Alinsky tactics and his Marxist thought, you can clearly see that he is one that encourages these kinds of shootings in order to advance a gun grabbing agenda in violation of the Constitution and the rights of the people.

Perhaps Steven Seagal is correct about many of these mass shootings: They are simply engineered for a political agenda.

Following the controversial Sandy Hook shootings, Obama implemented 23 executive actions. He followed up just months later with two more executive actions. After every single Islamic jihad attack on US soil, he fails to identify the ideology that he loves so much as the reason behind the killings. Instead, he simply attacks gun owners and the rights of gun owners. In fact, he openly lies to the world about mass shootings, claiming that they don’t happen in other countries. He did this recently in the very city where a mass shooting by Islamic jihadists claimed the lives of nearly 130 people and injured hundreds.

With just one more year to go in his second term, Obama has said that he will give “sustained attention” to gun control. Hold onto your guns America, and keep your powder dry! This is going to be a heck of a year that we stare down tyranny and terror on our own soil!