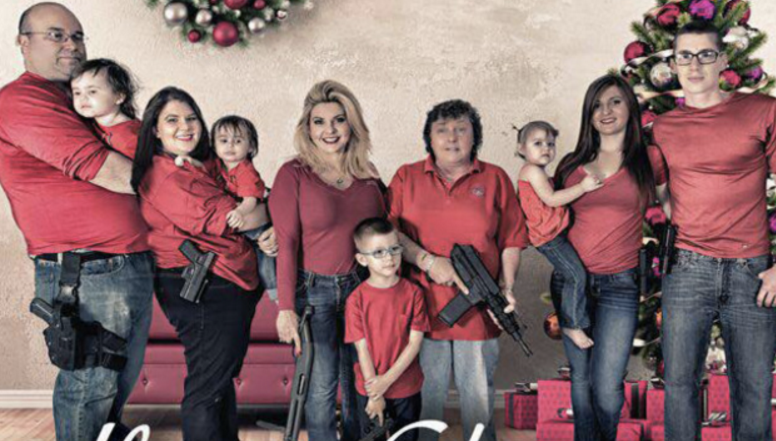 (INTELLIHUB) — Every once in a while something amazing happens that in turn has the liberal media literally jumping over themselves in condemnation.

Donald Trump telling the truth at the beginning of the campaign is a perfect example as you had the entire liberal mainstream media and their PC zealot supporters freaking out across social media platforms and mainstream media websites alike.

Now, in the spirit of the holidays, I give you the next pathetic “outrage” liberals are whining about and it combines two of the things they hate most.

Las Vegas Assemblywoman Michele Fiore has a long history of active support for the 2nd Amendment. As a lifelong NRA supporter and member of the Second Amendment Sisters, Fiore knows how important the right to bear arms is and she likes to display her pride in it. Fiore even has a 2nd Amendment themed 2016 calendar. (see here)

The liberal outrage machine was kicked into hyper-drive after Fiore posted the December photo on her Facebook page. The photo included her entire family decked out with firearms, including her five year-old grandson.

Despite the fact that Fiore posted the photo days before the terror attack in California, liberals have used the horrific attack to demonize her and insinuate that she is an unfit parent figure.

For her part, Fiore refused to back down, telling CNN, “What’s regrettable is governing and forcing innocent people to be defenseless while allowing and inviting terrorists into our country knowing the murderous outcome.”

“My strong message to you is its time Americans begin protecting America. Get armed, get trained get your head out if the sand and be prepared.”

It's up to Americans to protect America. We're just your ordinary American family.-With love & liberty, Michele