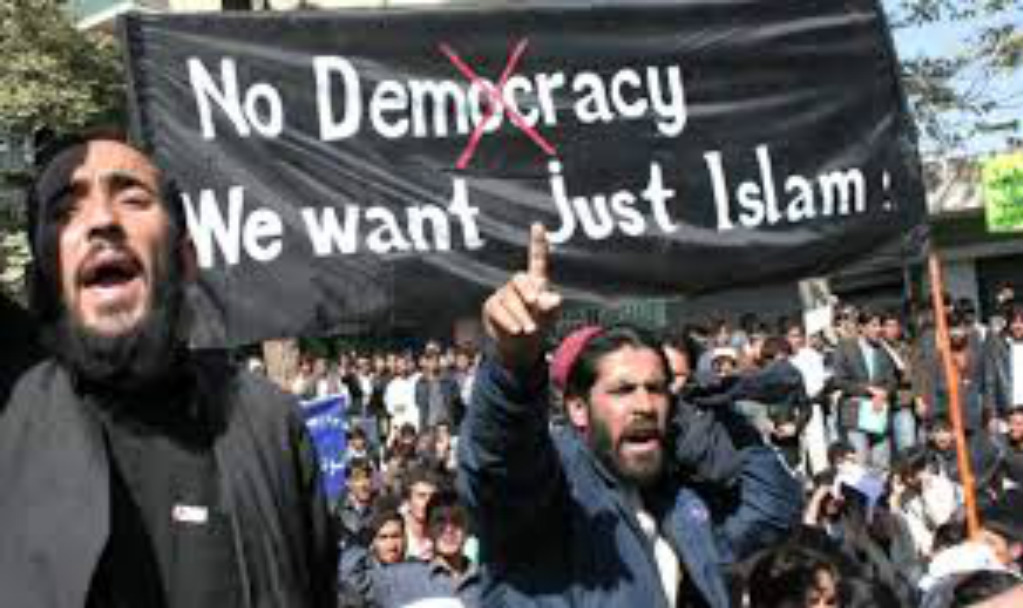 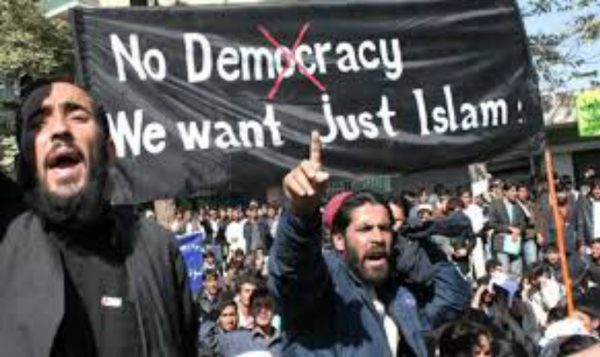 As Barack Obama and his useful idiots in his administration, Congress and the media attempt to immigrate hundreds of thousands of Islamists into the united States, the law needs to be brought to bear and the law is not on their side. Islamists, like all totalitarians, are prohibited by law (yes, American law) from immigrating to the united States.

In 1952, Islam, along with Communism was effectively banned by law.

The Immigration and Nationality Act, which was passed June 27, 1952 revised the united States’ laws regarding immigration, naturalization and nationality. This Act, under Section 313 states the following:

(a) Notwithstanding the provisions of section 405(b) , no person shall hereafter be naturalized as a citizen of the United States-

(2) who is a member of or affiliated with (A) the Communist Party of the United States; (B) any other totalitarian party of the United States; (C) the Communist Political Association; (D) the Communist or other totalitarian party of any State of the United States, of any foreign state, or of any political or geographical subdivision of any foreign state; (E) any section, subsidiary, branch, affiliate, or subdivision of any such association or party; or (F) the direct predecessors or successors of any such association or party, regardless of what name such group or organization may have used, may now bear, or may hereafter adopt, unless such alien establishes that he did not have knowledge or reason to believe at the time he became a member of or affiliated with such an organization (and did not thereafter and prior to the date upon which such organization was so registered or so required to be registered have such knowledge or reason to believe) that such organization was a Communist-front organization; or

(5) who writes or publishes or causes to be written or published, or who knowingly circulates, distributes, prints, or displays, or knowingly causes to be circulated, distributed, printed, published, or displayed or who knowingly has in his possession for the purpose of circulation, publication, distribution, or display, any written or printed matter, advocating or teaching opposition to all organized government, or advocating (A) the overthrow by force, violence, or other unconstitutional means of the Government of the United States or of all forms of law; or (B) the duty, necessity, or propriety of the unlawful assaulting or killing of any officer or officers (either of specific individuals or of officers generally) of the Government of the United States or of any other organized government, because of his or their official character; or (C) the unlawful damage, injury, or destruction of property; or (D) sabotage; or (E) the economic, international, and governmental doctrines of world communism or the establishment in the United States of a totalitarian dictatorship; or

(6) who is a member of or affiliated with any organization, that writes, circulates, distributes, prints, publishes, or displays, or causes to be written, circulated, distributed, printed, published, or displayed, or that has in its possession for the purpose of circulation, distribution, publication, issue, or display, any written or printed matter of the character described in subparagraph (5).

(c) The provisions of this section shall be applicable to any applicant for naturalization who at any time within a period of ten years immediately preceding the filing of the application for naturalization or after such filing and before taking the final oath of citizenship is, or has been found to be within any of the classes enumerated within this section, notwithstanding that at the time the application is filed he may not be included within such classes.

(d) Any person who is within any of the classes described in subsection (a) solely because of past membership in, or past affiliation with, a party or organization may be naturalized without regard to the provisions of subsection (c) if such person establishes that such membership or affiliation is or was involuntary, or occurred and terminated prior to the attainment by such alien of the age of sixteen years, or that such membership or affiliation is or was by operation of law, or was for purposes of obtaining employment, food rations, or other essentials of living and where necessary for such purposes.

Chapter 2, Section 212 presents a prohibition of entry to the US if the person belongs to an organization seeking to overthrow the US government by “force, violence, or other unconstitutional means.” The Koran and the Hadiths present Sharia and demand submission to Islam, which is antithetical to Biblical law and the US Constitution, as well as to our Republic.

Whether one pushes Islam as a religion is irrelevant. It’s ideology is opposed to America and her laws, including her Constitution.

First, consider that Hussein Obama has ignored immigration law, both with regards to those coming across our southern border and those from the Middle East.

Now, consider that this is about immigration and naturalization and its aim was primarily at Communism. However, it also mentions totalitarianism being promoted. That is all that Islam does. They are no different than Communism in their ideology. They just claim to do it in the name of Allah rather than advance the idea of a Creator.

Consider that the Muslims Brotherhood, as well as the Communists, have documented their goals for the destruction of America. Consider the Islamic organizations in the united States like designated terror and Muslim Brother hood front group Hamas-CAIR (Council on American Islamic Relations), The Islamic Society of North America, the Muslim Student Association, and plenty of others, including individual Muslims who seek to advance Sharia (which is anti-Christian and anti-American). Sharia falls under the very definition of the ideology of those Barack Hussein Obama wants to flood America with. If the law applies to those wishing to immigrate to the united States, should those same laws against sedition and treason not apply to those already here?

Our Constitution provides certain protections of those who have been born or naturalized in the united States in Section 1 of the Fourteenth Amendment:

Clearly, those immigrating are not privileged to those protections, but confined to remain outside the united States. Those inside our borders have certain rights to a trial, but if they are promoting sedition and a totalitarian ideology to overthrow government, then they must be held accountable. Not only does Communism do this, but so does Islam.

And, don’t give me that “freedom of religion” bit, for Islam is nothing more than totalitarianism under a thin veil of religion, but make no mistake, Islamists mean to rule the world apart from the Creator’s law and justice.

Before someone comes at me for pushing the Creator, the Lord Jesus Christ, and His law as something akin to Sharia, you really need to read how I rip down that straw man here. You need to read how our forefathers upheld our rights as attributed to the Creator in the year of our Lord (that’s Jesus Christ, see Bryan Fisher’s excellent article on that). You need to understand the real foundations of America.

However, when we really get down to the issue, we would then have to be rooting out possibly hundreds of Americans serving in Congress and the Obama administration. Lt. Col. Allen West was one that pointed out that there were at least 80 Communists in the House of Representatives in 2012. Why have they not been recalled, indicted, tried, convicted and then summarily brought to justice by the people they represent? Why are Islamic totalitarians like Keith Ellison and Andre Carson still in Congress, pushing America closer to totalitarianism? Why is Barack (Barry) Hussein Obama Soebarkah still in the Oval Office, Valerie Jarret by his side? It’s simply because the American people have tolerated the very lawlessness that the law speaks against and have failed to bring justice to these criminals against the people of the united States.

America, it’s time to wake up and bring justice to these people!