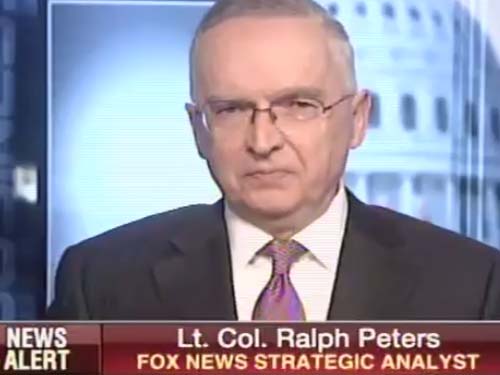 We’ve moved a bit beyond the days of Putin calling Obama an‘oatmeal head’.

Not that many of us don’t agree with at least some of the sentiments retired U.S. Army Lt. Col. Ralph Peters expressed during his live interview Monday on Fox regarding the president’s address on “keeping America safe,” but the downward slide in regards to that thin veneer of respectability and deference (no matter how contrived it may have always been) to America’s president has just officially hit an all-time low.

“Mr. President, we’re not afraid! We’re angry! We’re pissed off! We’re furious!” Peters said. “We want you to react. We want you to do something. You’re afraid! I mean, this guy is such a total pussy, it’s stunning! We, the American people, who he does not know in any intimate sort of manner, we want action. ”

In a panel review of the president’s speech also on Fox yesterday, Stacey Dash (who starred in the movie Clueless in the 90s and is now somehow a political analyst?) said she felt like Obama, “could give a sh*t”.

Put another way, more and more people are so fed up with the b.s. coming out of the puppet in the White House, they just don’t give a sh*t anymore.

Both Peters and Dash were suspended for two weeks for foul language which Fox programming executive Bill Shine said in a statement later was “completely inappropriate and unacceptable for our air,” according to The Washington Free Beacon.

We all know what’s happening. We’re reaching the end of Obama’s final term. What was a beautiful wedding and a romantic honeymoon is about to end in a horrifying reality TV divorce, complete with drunken fights in the front yard in front of the neighbors and restraining orders. And after Obama has been used up for all the agenda pushing the system has been able to manage with him (race war, terror war, gun control, immigration, bailouts, climate change, TPP, etc.) and people can no longer stand the sight of him, it’ll be just about time for America to “elect” a new puppet to continue to piss everyone off for the next four-to-eight years.

Instead of living in an era like the 50s when people were very careful about publicly criticizing the president even when he deserved it, or an era like up until the end of the 20th century when people criticized away but still managed to do it while keeping their comments above board, now we’ve moved on to the era where analysts giving political commentary on news programs openly curse the president on live TV.

But hey, at least people are done pretending not to care about how bad things have gotten.