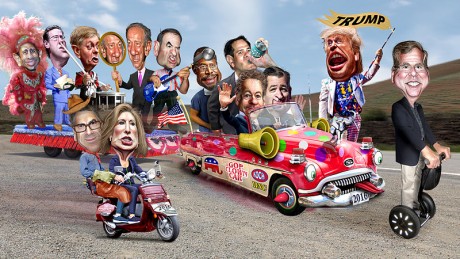 It is going to be much more difficult for Donald Trump to win the Republican nomination than most people think. In order to win the nomination, a candidate must secure at least 1,237 of the 2,472 delegates that are up for grabs. But not all of them will be won during the state-by-state series of caucuses and primaries that will take place during the first half of 2016. Of the total of 2,472 Republican delegates, 437 of them are unpledged delegates – and 168 of those are members of the Republican National Committee. And unless you have been hiding under a rock somewhere, you already know that the Republican National Committee is not a fan of Donald Trump. In order to win the Republican nomination without any of the unpledged delegates, Trump would need to win 60.78 percent of the delegates that are up for grabs during the caucuses and primaries. And considering that his poll support is hovering around 30 percent right now, that is a very tall order.

In the past, it was easier for a front-runner to pile up delegates in “winner take all” states, but for this election cycle the Republicans have changed quite a few things. In 2016, all states that hold caucuses or primaries before March 15th must award their delegates proportionally. So when Trump wins any of those early states, he won’t receive all of the delegates. Instead, he will just get a portion of them based on the percentage of the vote that he received.

In 2016, more delegates will be allocated on a proportional basis by the Republicans than ever before, and with such a crowded field that makes it quite likely that no candidate will have secured enough delegates for the nomination by the time the Republican convention rolls around.

And this actually plays right into the hands of the Republican establishment. A dinner for prominent Republican leaders that was held in Washington D.C. last week discussed the possibility of a “brokered convention” if they can keep Trump from getting the required number of delegates during the caucuses and primaries. The following comes from the Hill…

More than 20 top GOP officials discussed at a dinner on Monday the party’s strategy in the event of a brokered convention amid Donald Trump’s consistent lead in the polls.

The sources said Priebus and McConnell were mostly silent during the deliberation and did not signal support for an explicit anti-Trump effort.

What was extremely interesting to me was who was reportedly at this meeting. According to the Washington Post, key advisers to Jeb Bush, Marco Rubio and Mitt Romney were all there…

In the event of a “brokered convention”, it is almost inevitable that an establishment candidate would emerge as the nominee. That list would include names such as Bush, Rubio and Romney, and it would exclude names such as Trump, Cruz and Carson.

Unless the field thins significantly, it looks like it is going to be a real challenge for anyone to stockpile the required number of delegates before the convention at this point. Here is an analysis of the delegate math that candidates are facing that comes from Think Progress…

Trump’s biggest asset is winner-take-all states. So long as he captures a plurality of the vote in these states, he wins every delegate that is up for grabs in the state. Although the GOP’s rules require states that wish to hold a winner-take-all contest to schedule their primary or caucus no sooner than March 15, eleven states and territories will have such a contest. Additionally, a handful of states allocate some portion of their delegates to the winner of the state as a whole. In total, Trump could win about 500 delegates in states that award a bloc of delegates to the candidate who wins a plurality of the vote.

Even if Trump captures every single one of these delegates, however, he would still need to capture over 700 of the nearly 2,000 remaining delegates in order to emerge as the nominee, and here is where the math gets much more difficult for him. Even if he captures every single delegate awarded to candidates who win a plurality of the votes in a state, he would still need to win approximately 37 percent of the remaining delegates to capture the nomination — under the various and often complex rules that each state uses to allocate these delegates. Currently, the Real Clear Politics polling average shows Trump leading the GOP field with about 30 percent of the vote, so his current polls likely do not give him enough support to capture the nomination outright.

When news of the dinner meeting of establishment Republicans in D.C. first came to light, it created a huge uproar. Needless to say, Donald Trump was not thrilled, and he is even hinting that he may stage an independent run if he is not treated fairly…

“I’ve been hearing about these closed-door meetings and I don’t like that,” Trump told CNN’s “State of the Union With Jake Tapper.” “That wasn’t the deal I made. I signed a pledge, and the pledge was supposed to be a double deal. They were supposed to be honorable, so we’re going to find out. If it’s going to be that way we’ll have problems, but I hope it’s not going to be that way.”

Retired neurosurgeon Ben Carson again threatened to bolt the Republican Party on Sunday if leaders use a “back room deal” to decide the presidential nomination.

“If that is the case, then, you know, I’m out of here,” Carson said on ABC’s This Week.

Carson reacted to a Washington Post report last week that Republican Party leaders met to discuss the possibility of a “brokered convention” in which no candidate has the majority of delegates needed to win the nomination; they also reportedly discussed possible ways to stop GOP front-runner Donald Trump.

In the end, I would be absolutely stunned if any outsider candidate is able to walk away with the nomination. Politics in America is very dirty business, and the establishment will move heaven and earth to keep Trump, Cruz or Carson from coming out on top.

Yes, I know what the polls say right now, but I think that bookies have a much better feel for what the eventual outcome will be. After all, if they are wrong about these things it will cost them a tremendous amount of money. And according to the bookies, Marco Rubio is the heavy favorite at this point…

But if you go to online betting sites, where people can wager real money on this stuff, you will get a very different impression of the race. Marco Rubio, who got just nine per cent in the CBS News/Times poll, is still regarded as the strong favorite to land the nomination. At some bookies, the odds of Rubio winning are just 5/4, meaning you have to wager forty dollars to win fifty. Trump is the second-favorite, but gamblers can still obtain odds of 3/1 (or even 4/1) on him being the candidate. Predictwise, an online site that combines information from the betting markets and the polls, reckons the likelihood of Trump winning is just twenty per cent, whereas the probability of Rubio winning is forty-one per cent.

Without a doubt, Rubio is starting to surge, but at this point it looks very doubtful that any candidate will secure enough delegates before the convention comes.

So in the end, we could very well see a “brokered convention” for the first time in decades, and the damage done to the Republican party by a brokered convention could potentially hand the general election to Hillary Clinton.

At least that is how I see things.

How do you think that things will play out?

California Bribed Boy With Pizza to Get COVID Shot Without Parent’s Consent, Told Him To Keep It Secret
December 7th, 2021 Sons of Liberty Media