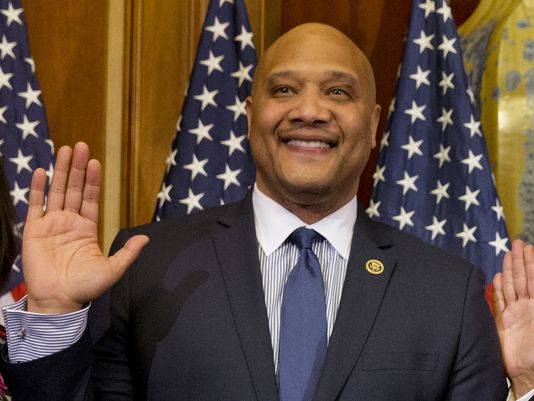 “I just saw a report where the white supremacist group Stormfront — this has been a call to action, the rhetoric that we’re seeing. It concerns me,”Carson told Stephanopoulos.

“I think that most of our largest domestic threat comes from racial supremacist groups. I’ve worked in counterterrorism; I know this to be a fact,” he added.

The Congressman went on to suggest that Donald Trump was responsible for creating an environment where “dangerous rhetoric” was driving a “restoration movement” that sought a return to “mythological good ol’ days.”

Despite Islamic terrorists carrying out two massacres in the space of just a few weeks – one in Paris and one in San Bernardino, Carson repeated the mantra that Islam was a “religion of peace.”

While Dylann Roof’s massacre of black churchgoers in Charleston is the only recent white supremacist terror attack in the United States, Muslim jihadists have struck time and time again.

The Fort Hood shooting, the Boston bombing, the Oklahoma beheading, the Garland shooting, the Chattanooga attack, and the San Bernardino massacre were all carried out by Islamist terrorists.

This list of Islamist terror attacks in the United States since the 1970s also completely outweighs the number of attacks blamed on white supremacists.

In the context of global terror, this list of Islamist terror attacks stretching back to the 1980’s also clearly illustrates that Muslim extremists represent a far bigger threat than white supremacists.

As the U.S. National Counterterrorism Center (NCTC) has documented, in a typical year, terror attacks perpetrated by Sunni Muslims vastly outnumber those committed by any other group.