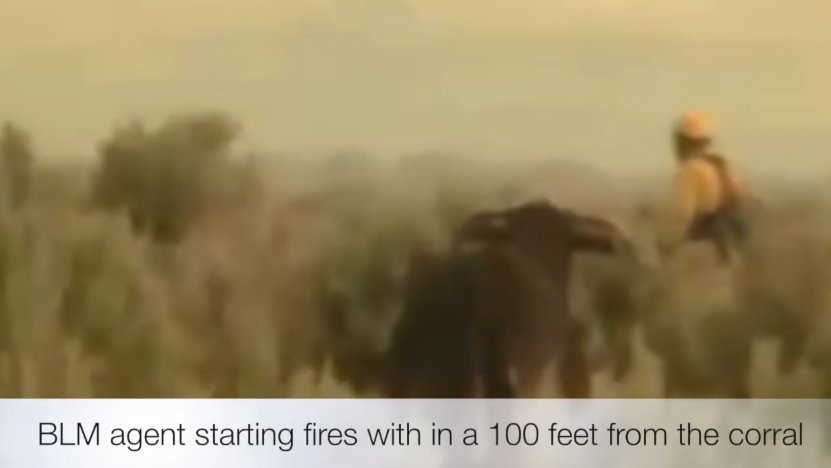 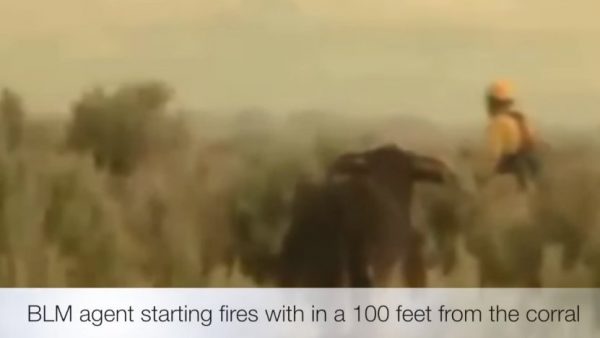 I previously reported on the Hammond family, a family of ranchers in Oregon whose two patriarchs are being targeted in a government conspiracy to remove the ranchers from the land they have been on for decades. The family has been threatened by federal agents and fear for their lives. Now, the Bureau of Land Management is doing the very thing that the Hammonds did, which is burn off some of the land, only in the case of the BLM, they have killed more than 80 head of cattle, endangered the ranchers, injured other cattle, burnt homes and other structures such as fences and power poles and threatened an entire town! Yet, it is ranchers who are considered terrorists by the feds, not the BLM.

Ammon Bundy recently spoke out on the injustices and criminal activity of the BLM against the Hammond family.

Bundy claims that there was no due process, something that is specifically supposed to be protected under the Fifth Amendment of the US Constitution, and he went on to state that there was a tremendous amount of corruption involved in the sentencing, the re-sentencing and even in the present situation.

Bundy then went on to show a video of the BLM starting prescribed fires in July, something that normally doesn’t take place at that time as the animals the ranchers care for are usually eating the very grass that the BLM set on fire. However, the video shows that the BLM didn’t just burn grass. It killed and injured cattle, burned homes and destroyed other property. The video of land burning by BLM picks up around the 3:10 mark below. Warning: Some language.

The video was filmed less than two weeks from the day the Hammonds were sentenced for starting a similar fire. Keep in mind, as I reported previously, that the Hammonds have already spent time in prison and now are being labeled as “arsenal terrorists” for starting such fires. Yet, the BLM creates these fires with impunity.

Not only did they start the fires, but as the video shows, there was no one tending to the fires at various times. Not only that, but as ranchers attempted to make a fire break with water trucks and equipment, the BLM agents were building a fire around them! In fact, video captured BLM agents lighting fires within 100 feet of the corrals and those taking the video! Talk about deliberate terrorist acts!

But the BLM won’t be held accountable for their actions. No sir. It’s the ranchers who are terrorists for setting fires at the proper time of year to try and deal properly in the maintenance of the property, and when a judge finds that they aren’t terrorists, but lit the fires, he still sentence them to time in prison! Yet, because he did not give them the minimum sentence for arson terrorists, a federal judge has re-sentenced two men from the Hammond family to that minimum sentence, which is to be carried out in January.

This is not only unjust, it’s a clear double standard! Every BLM agent involved in these fires should face the same punishment as the Hammons, or drop the charges against the Hammons altogether! Frankly, the Hammons should never have been imprisoned. No property damage was actually done. However, as you can see, the BLM has engaged in arson and destroyed property in the process.

Former Texas Congressman Ron Paul warned about an armed BLM and the kind of tyranny it would impose back in 1997. No one listened. They’re listening now!

The entire premise for the attack on ranchers out West by the BLM is to obtain their land as part of Agenda 21. Without the men of the Hammond family around, how will the ranch survive? It won’t, unless others help. And if that doesn’t happen, the BLM is first in line to obtain the land. Convenient, isn’t it?

Pass this one and let’s get the word out about this injustice! Also contact those who are sworn to uphold the law, not be the puppets of tyrannical government and share with them the video. It is vitally important and time is running out for the Hammonds!