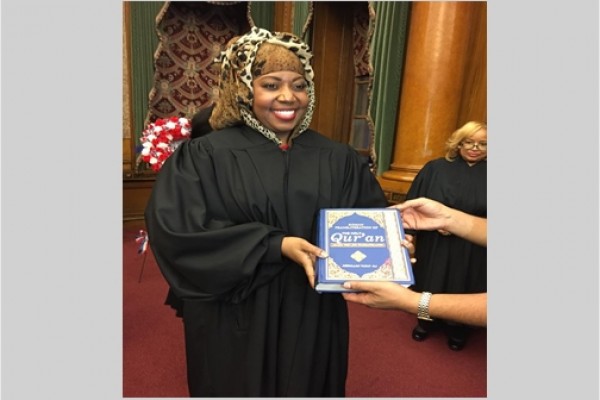 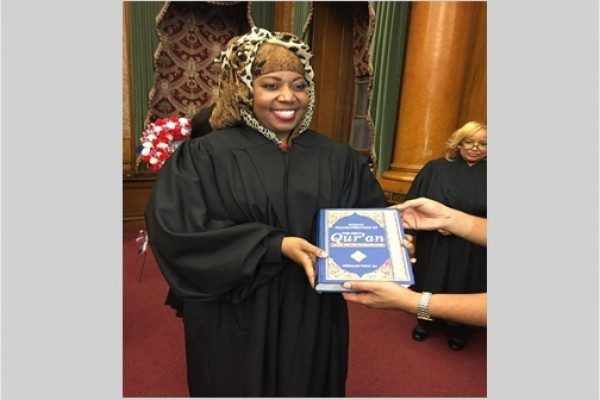 America was birthed as a Christian nation. She has been at war with Islam since her conception and Thomas Jefferson warned of the teachings of Islam after studying the Quran to better understand his enemies in the Barbary Wars. However, as America slips further down the road of judgment, Carolyn Walker-Diallo, a Muslim woman who has become New York’s latest 7th Municipal District Court judge for the Brooklyn Borough, was sworn in on the Quran, not the Bible.

“All is praise (sic) is indeed due to the Most High!” she said in a post thanking her supporters. “I am humbled that my community has entrusted me with the immense responsibility of ensuring that EVERYONE has notice and a FAIR opportunity to be heard in the halls of justice.”

While the swearing in session didn’t make much of a controversy itself, video posted online of the session did and it sparked outrage.

“Sickening,” one Facebook user posted. “Is this America or the Middle East?”

“Another piece of s— Muslim,” read another comment, “trying to take over this country.”

Of course, liberal multiculturalists like Tom Boggioni labeled those who showed disgust with the judge’s actions as “bigots.” I was surprised he didn’t use the terms xenophobe and Islamophobe in his article. He did, however, use the term “racist,” which I often find funny since Islam is an ideology. Interestingly enough, Walker-Diallo is a prime example of that, as she is not Middle Eastern, but a Black American. An engagement of the brain on this one a little more is most definitely in order.

While it is true that there is no mandate that a person be sworn in on a Bible, that has been the tradition in our country for hundreds of years. Why? It’s because we were founded as a Christian nation, not a Muslim one nor an anti-theist one. Our foundations were Christian. No one can deny this.

Interestingly enough, Ellison was sworn in on Thomas Jefferson’s Quran, which later Jefferson would back the publishing of with this introduction:

“Thou wilt wonder that such absurdities have infected the best part of the world and wilt avouch that the knowledge of what is contained in this book will render that [Islamic Sharia] law contemptible.”

The one thing that is not being acknowledged with the swearing in on the Constitution is the God you are taking your oath before and the one who holds you accountable for your actions in office. As for the Muslims taking oaths on the Quran, I would contest that the spirit behind the Quran is that of anti-Christ, thus Satan. So when that pledge is taken by Muslims, they are submitting themselves to the devil.

This is the greater problem with allowing Islamic immigration into America. While Islamic jihadis are a concern, the bigger picture is that these people find their way into political office and begin to impose Sharia. And we are seeing it occurring in various cities across the united States. It’s really time for this kind of thing to be put to an end and for Christians to once again to repent and stand up and take back the land that God gave us for His glory.