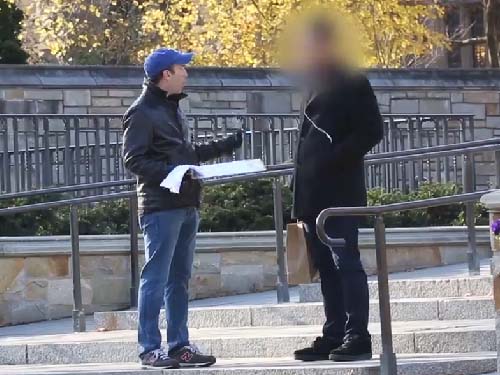 Sometimes it’s hard not to begin a story with the line “this country is going to Hell in a hand basket”.

The safe-spaces-political-correctness cancer is spreading across this country at an alarming rate. It’s metastasizing. Soon it’s going to infect every inch of the Bill of Rights like termites feasting on a foundation.

The dumbed down, Idiocracy society is real. It’s here. Now.

Below is a video that shows the ivy leaguers at Yale not just signing a petition to do away with the First Amendment, but actually fawning over how wonderful of an idea they all think repealing the First Amendment is because of reasons like if something hurts someone’s feelings, it should not be protected as free speech.

In the video, filmmaker and satirist Ami Horowitz is the guy getting students to sign his petition, and reportedly a solid majority was all for it. Even more sad, not a single one of them seems to realize the irony of signing a petition to do away with a freedom that includes the right to petition!

The fact that some of the supposedly best and brightest college students this country has to offer are practically jumping up and down with glee to attempt to get rid of one of the most important natural rights we have as human beings just kinda makes me throw up in my mouth a little.

Sure, it’s Fox News and sure, it’s edited, but as someone who has done plenty of man-on-the-street interviews myself (including this one about giving up freedom), it really is horrifying to realize not only are these people serious, but for every single one you see in this video, there are many, many more out there who agree with them and would sign that petition in a heartbeat.

Yeah. In summation, it’s barf-inducing. Watch at your own risk.