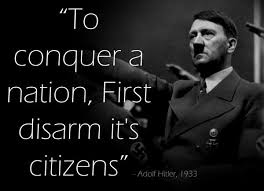 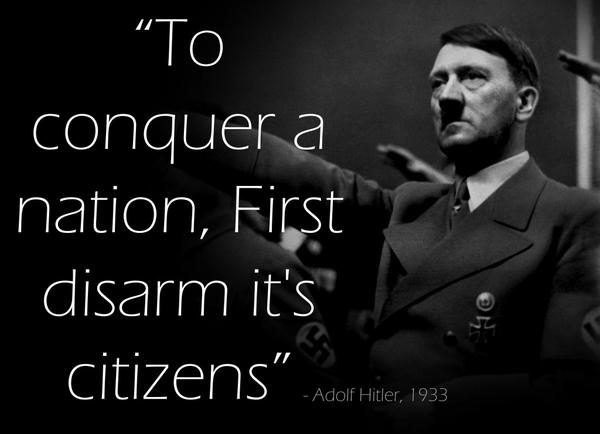 Is it not absolutely astounding that at every incident in which a gun is used in a crime, engineered or otherwise, the tyrant Barack Hussein Obama, along with other corrupt politicians and Hollywood’s hypocritical anti-gun teachers, stands against The Bill of Rights. This is the very Bill of Rights that our founders established, which these treasonous individuals attack only to disarm, to strip and to leave defenseless the American people from defending themselves against criminal.

It is the duty and obligation of the president to uphold the Constitution of the United States, not to tear it down and attempt to recreate it in his devilish and tyrannical image (John 10:10). Friends, this is the voice of a tyrant!

“Necessity is the plea for every infringement of human freedom. It is the argument of tyrants; it is the creed of slaves.” - William Pitt (the Younger), Speech in the House of Commons, November 18, 1783

As a reminder, this individual took to the people’s White House after Sandy Hook allegedly took place, stood up in the actor’s presidential bully pulpit and wiped a tear from his eye over the loss of the lives of children. Of course, in the end, he called for more gun control. The problem with that is, this man voted over 242 times to make sure that innocent babies in the womb were snuffed out before entering this world.

Additionally, we cannot forget about Operation Fast and Furious, in which Obama and the Attorney General Eric Holder put high powered guns into the hands of Mexican drug lords where hundreds of innocent Mexicans died only for Barack to go over to Mexico and blame the American people for the crimes that he and his administration were directly responsible.

Americans need to get this deep into their hearts and minds that this is an important move for corruption to have absolute control over every aspect of American lives by disarming you.

“Before a standing army can rule, the people must be disarmed, as they are in almost every country in Europe. The supreme power in America cannot enforce unjust laws by the sword; because the whole body of the people are armed, and constitute a force superior to any band of regular troops.” - Noah Webster, An Examination of the Leading Principles of the Federal Constitution, October 10, 1787

Antithetical to what Our Founders Established

Amendment II of the Bill of Rights

A well regulated militia, being necessary to the security of a free state, the right of the people to keep and bear arms, shall not be infringed.

“The laws that forbid the carrying of arms are laws of such a nature. They disarm only those who are neither inclined nor determined to commit crimes…. Such laws make things worse for the assaulted and better for the assailants; they serve rather to encourage than to prevent homicides, for an unarmed man may be attacked with greater confidence than an armed man.” - Thomas Jefferson, Commonplace Book (quoting 18th century criminologist Cesare Beccaria), 1774-1776

“Besides the advantage of being armed, which the Americans possess over the people of almost every other nation, the existence of subordinate governments, to which the people are attached, and by which the militia officers are appointed, forms a barrier against the enterprises of ambition, more insurmountable than any which a simple government of any form can admit of.” - James Madison, Federalist No. 46, January 29, 1788

America, rights are given to you by God, not the generosity of the state ( Exodus 18:21) Rights are not taken away, they are forfeited. The Laws of our Constitutional Republic are on your side.

Therefore, in closing, if you decide to relinquish your rights to bear arms, the rest of your rights will go right along with it.