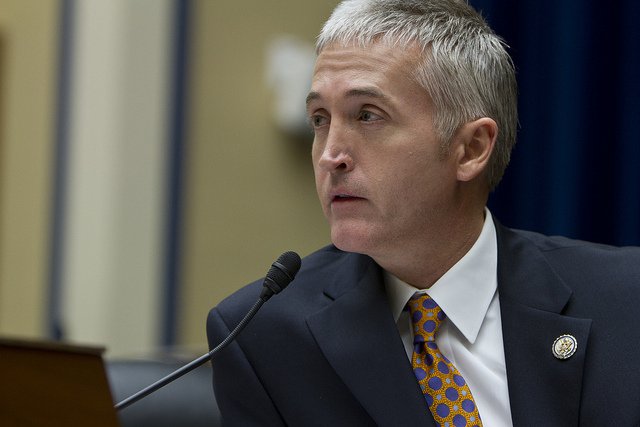 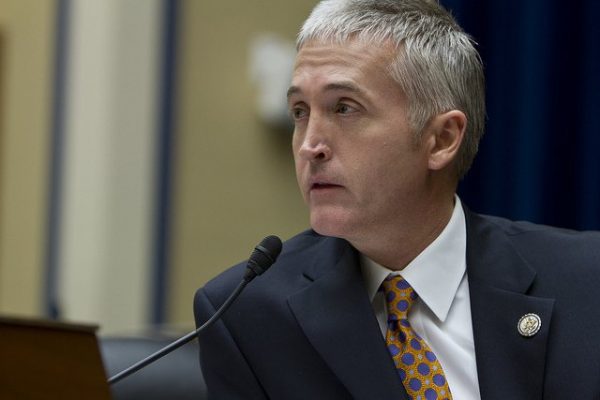 Before I begin and before you get angry at me for pointing out what I’m about to point out, I want to ask you to hold that thought and ask yourself why you are not more angry at these representatives for their ignorance and willful ignoring of the law! I have been suspicious of Rep. Trey Gowdy for some time now. Though he often says a lot of good things, the reality is that he has been on several congressional committees, including chairing the Benghazi committee and has brought absolutely no resolve to any of those things. However, today, a video was released challenging Gowdy on the Natural Born Citizenship qualifications of presidential candidate Marco Rubio (and we could also apply the same standard to Ted Cruz). Gowdy’s answer was simply treasonous.

Evan Mulch, who is a constituent of Gowdy’s, confronted the congressman concerning and first asked if he had read the 28 pages of the 9/11 report that several congressmen are attempting to have released to the public. Gowdy admitted that he had not read them.

However, it was the follow-up question that generated the ignorance and heat. Mulch asked Gowdy, “When Marco Rubio said that his parents were born in another country, that doesn’t make him a natural born citizen, according to the Constitution. What would you say to that?”

“That issue has already been litigated,” said Gowdy.

Gowdy then went on to totally distort the idea of what was put to him and asked if John McCain was ineligible, something that has not been a part of being a natural born citizen. In case you miss the dodge there, Rubio’s parents were not citizens when he was born in the States. Of course, Rubio is an American citizen, but fails to meet the qualifications that even the founders recognized had to be present to be a natural born citizen.

When Gowdy was asked, “So, we don’t need a natural born citizen to be president?”

“It depends on what you mean by that?” he responded.

It depends on what you mean? My goodness, the ignorance is glaring and I will demonstrate just how much shortly, but Gowdy continued to demonstrate his ignorance of the natural born citizen issue.

When Mulch said that we know what the founders meant by it, Gowdy retorted, “No you don’t!”

But Mr. Gowdy, we most certainly do know! In fact, we have something called the 1790 Naturalization Act, which clearly defines who a natural born citizen is. And no, it is not just a person born on American soil as the Constitution distinguishes between natural born and “a citizen of the United States, at the time of the adoption of this Constitution.” If all that was required was to be a “citizen,” then why the distinction? It was because of what I’m about to show you.

As Publius Huldah has pointed out, the framers were quite familiar with Vattel’s Law of Nations. As such, they understood what it meant to be “natural born,” though Vattel used the term subject, not citizen. While many have tried to blow off Congress’ use of the Law of Nations, Benjamin Franklin wrote a letter to Charles Dumas on December 9, 1775 to thank him for sending three copies of the book and specifically wrote, “… I am much obliged by the kind present you have made us of your edition of Vattel. It came to us in good season, when the circumstances of a rising state make it necessary frequently to consult the law of nations. Accordingly that copy, which I kept, (after depositing one in our own public library here, and sending the other to the College of Massachusetts Bay, as you directed,) has been continually in the hands of the members of our Congress, now sitting, who are much pleased with your notes and preface, and have entertained a high and just esteem for their author…” (2nd para) [boldface added]

So, Congress most definitely was aware of the volume, had high and just esteem for Vattel and continually had it in their hands. Keep in mind that this was all before the Constitution was written in 1787.

In fact, Publius Huldah points out that in the 1916 edition of the Law of Nations published by the Carnegie Endowment, Albert de Lapradelle wrote an introduction which stated that the fathers of independence, “were in accord with the ideas of Vattel,” that the found in Vattel “all their maxims of political liberty” and,

“From 1776 to 1783, the more the United States progressed, the greater became Vattel’s influence. In 1780 his Law of Nations was a classic, a text book in the universities.”

While our founders were originally subjects of Britain, once they won the war for independence, they became citizens, and Vattel was the one who offered that understanding they came to with regard to natural born citizen. Publius Huldah has previously pointed out what the gist of what Vattel penned in Law of Nations, Book I, Ch. XIX, at §§ 212-217, is this:

§ 212: Natural-born citizens are those born in the country of parents who are citizens – it is necessary that they be born of a father who is a citizen. If a person is born there of a foreigner, it will be only the place of his birth, and not his country.

§ 213: Inhabitants, as distinguished from citizens, are foreigners who are permitted to stay in the country. They are subject to the laws of the country while they reside in it. But they do not participate in all the rights of citizens – they enjoy only the advantages which the law or custom gives them. Their children follow the condition of their fathers – they too are inhabitants.

So, the founders knew what it meant and we know they knew what it meant. Gowdy is just out to lunch here or is being dishonest. I’ll give him the benefit of the doubt, but there is no excuse for a man in his position to not know this.

Notice that even in this Act, there is a distinction between “citizens,” those who are “naturalized” and “natural born citizens.” Notice they also understood that men like John McCain (though he is a traitor to his country) would be a natural born citizen, even if he were born outside US soil in Panama. Why? Because his parents were both citizens! There is no doubt that we can know exactly what the Framers had in mind when they wrote “natural born citizen.”

Finally, you’ll notice Trey Gowdy said, “You’re either going to follow the law of the land or you’re not.”

Exactly right, Mr. Gowdy, but it seems you are so ignorant of what the Constitution means by Natural Born Citizen that you are unable to follow the law, or you are simply willfully not following it, but propping up nothing but anchor babies from all over. After all, if all that is required to be president is for one to be a citizen, every anchor baby ever born should fit Gowdy’s sentiments, right?

Rubio’s parents were born in Cuba and were not naturalized till after he was born in the States, making him a citizen, but not a natural born citizen (remember the language distinguishing between those two in the Constitution. Cruz’s father was born in Cuba and his mother was a US citizen. Remember, that one must be born of parents (plural) who are citizens, but more specifically the father must be a citizen. Cruz held dual citizenship in Canada and the united States until he wanted to throw his hat in the ring for a presidential run.

But notice the other problem here. We are told we are a nation of immigrants. No, we are not. I’m not. My family decades ago may have been, but my parents were citizens, their parents were citizens and I’m a citizen. Furthermore we are natural born citizens. Also, one woman turns and ignorantly claims, “You realize we’re all not natural born citizens.” Talk about why we are in the place we are at!

My people are destroyed for lack of knowledge: because thou hast rejected knowledge, I will also reject thee, that thou shalt be no priest to me: seeing thou hast forgotten the law of thy God, I will also forget thy children. Hosea 4:6

Indeed, America is being destroyed due to the lack of knowledge of the people. As a final thought, keep in mind that the Bible even teaches that a foreigner should not rule over the people, emphasizing the natural born status.

Thou shalt in any wise set him king over thee, whom the LORD thy God shall choose: one from among thy brethren shalt thou set king over thee: thou mayest not set a stranger over thee, which is not thy brother. Deuteronomy 17:15