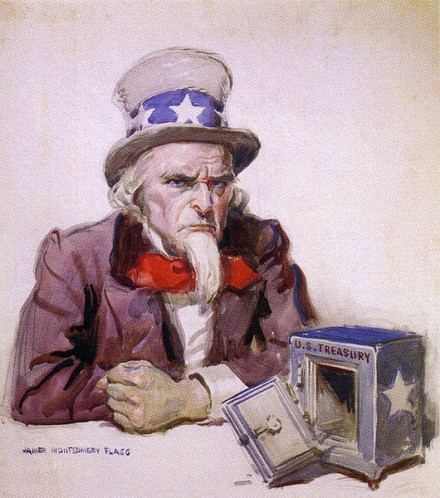 Under Barack Obama, the U.S. national debt has risen from $10,626,877,048,913.08 on January 20th, 2009 to $18,795,033,928,275.59 on December 21st, 2015.  That means that the debt that we are passing on to future generations has increased by 8.16 trillion dollars since Barack Obama was inaugurated.  There is still a little more than a year to go in Obama’s presidency, and it is already guaranteed that Obama will add more than a trillion dollars a year to the national debt during his presidency.  In fact, when you do the math, we are stealing more than 100 million dollars from future generations of Americans every single hour of every single day.  It is a crime of a magnitude that is almost unimaginable, and at this point it is mathematically impossible for the U.S. government to pay off all of this debt.  To say that we are in trouble would be a massive understatement.

And of course not all of the blame goes to Obama.  The Republicans have had control of the House of Representatives for all but two years while Obama has been in the White House, and they have gone along with all of this reckless spending.  Without the approval of the House, Obama could not spend a single penny, but the Republicans have consistently chosen not to stand up to him.  In fact, the Republicans in Congress just approved another massive 1.2 trillion dollar spending bill that essentially gave the Democrats every single thing that they wanted.  House Minority Leader Nancy Pelosi even admitted that the Republicans “were willing to concede so much” during the negotiations.

At this point, even Rush Limbaugh is completely disgusted with the Republican Party…

I have a headline here from the Washington Times:  “White House Declares Total Victory Over GOP in Budget Battle.” That headline’s a misnomer.  There was never a battle.  None of this was opposed.  The Republican Party didn’t stand up to any of it, and the die has been cast for a long time on this.  I know many of you are dispirited, depressed, angry, combination of all of that. But, folks, there was no other way this could go. Because two years ago when the Republican Party declared they would never do anything that would shut down the government and they would not impeach Obama, there were no obstacles in Obama’s way and there were no obstacles in the way of the Democrat Party.

Do you remember when Republican politicians were running around promising that they would defund Obamacare?

Do you remember when Republican politicians were running around promising that they would defund Planned Parenthood?

Do you remember when Republican politicians were running around promising that they would defund Obama’s refugee program?

In this new spending deal, the Republicans got nothing.  It was a sham, a farce and a total insult to the American people.  Here is more from Rush Limbaugh…

It fully funds Planned Parenthood.  That, to me, is unforgivable, with everything now known about what goes on behind closed doors at Planned Parenthood, and that the federal government, led by a Republican Party, sees fit to pay for it.  It is beyond comprehension, and it is a total squandering of moral authority to fully fund the butchery at Planned Parenthood.  This spending bill fully pays for Obama’s refugee plans, fully.  This spending bill, this budget bill quadruples the number of visas Obama wants for foreign workers.  This is even a slap at American union workers.  Not the leaders.  The union leaders seem to be in favor of it, but blue-collar people, known as working people, have been sold down the river along with everybody else here.

This spending bill even fully pays for every dime asked for by Obama on all of this idiocy that’s tied up into climate change.  Everything Obama wanted, everything he asked for, he got.  You go down the list of things, it’s there.

Even after watching all of the undercover Planned Parenthood videos that came out over the past year, the Republicans in Congress still voted to fund the harvesting and sale of body parts from aborted babies.

And surveys have found that the American people support the continued funding of Planned Parenthood by about a 2 to 1 margin.  After everything that we have seen, the vast majority of Americans still want to continue giving those butchers hundreds of millions of taxpayer dollars a year.

No wonder so many people are comparing America to Nazi Germany these days.  We truly have become an exceedingly wicked nation.

We like to think that we are an “example” for the rest of the planet, but in reality the only example that we are is a bad one.  Our guilt has been put on display for all the world to see, and yet we just continue to race toward even more evil.

Not only did the Republicans not defund Planned Parenthood, the truth is that not a single pro-life amendment of any sort even got into the bill thanks to Paul Ryan.  The following comes from lifesitenews.com…

“The bill failed to include a single major pro-life policy rider, despite the requests of over 120 members of Congress and the disturbing revelations about Planned Parenthood brought to light this year,” said Congresswoman Diane Black, R-TN, who voted against the bill.

The House Freedom Caucus offered a series of amendments to the bill defunding Planned Parenthood, strengthening conscience protections for pro-life physicians and organizations, and ending all U.S. funding for the United Nations Population Fund (UNFPA). The House Rules Committee rejected these riders earlier this week, as Speaker Paul Ryan said he did not want conservative amendments added to the bill that would drive away his Democratic colleagues.

The committee also rejected an amendment to increase vetting of refugees who enter the United States from the terrorist hotbeds of Syria and Iraq, which had previously passed the House, with 47 Democrats adding strong bipartisan support.

Now the U.S. national debt is nearly double the size that it was just before the last financial crisis struck, and our leaders continue to borrow and spend as if there is no tomorrow.

Perhaps they have convinced themselves that there will never be any consequences for acting so foolishly.

Perhaps they believe that in the end everything will turn out okay somehow.

Perhaps they are able to rationalize the theft of more than a hundred million dollars an hour from future generations of Americans.

But nothing can erase what they have done to us.  The promising future that our children and our grandchildren should have had has been completely wiped out, and the leading edge of the greatest economic crisis that any of us has ever known is now upon us.

If we had done things differently, things wouldn’t have had to turn out this way.  But now the die is cast, and we are all going to pay a very high price for the mistakes that have been made in Washington.