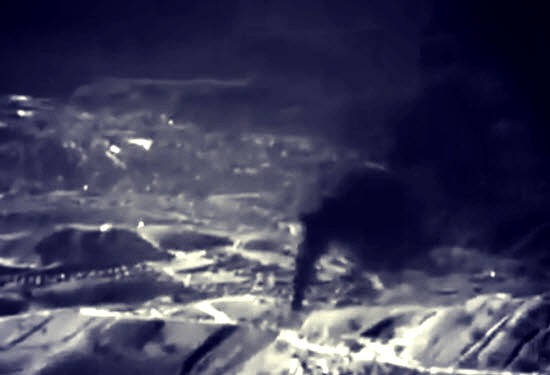 An immense plume of runaway natural gas — invisible to the naked eye — is billowing out of the ground at Aliso Canyon at an insane rate and has been for two months months now. Some 150 million pounds of methane has now poured into the atmosphere in just a few weeks.

It is now officially being called the worst catastrophe since the BP oil spill and the worst gas leak in California state history.

Newly released infrared video shows the enormity of the issue:

“It is one of the biggest leaks we’ve ever seen reported,”said Tim O’Connor, California climate director for the Environmental Defense Fund, a nonprofit group that obtained the video. “It is coming out with force, in incredible volumes. And it is absolutely uncontained.”

Zero Hedge reported that methane is 72 times more impactful (aka, worse) for the atmosphere than carbon dioxide is and this stuff is escaping with the force of a volcanic eruption that hasn’t stopped for months.

Nearby neighborhoods have been forcibly evacuated for safety. And again, the media outlets that have actually covered this situation just keep reaffirming the fact that there is no way to stop it. The leak continues to vent a gas which, in this volume, will have disastrous consequences on the atmosphere at a rate of up to 110,000 pounds per hour.  This is all happening right now just 20 miles south of Los Angeles.

The question is, why haven’t we seen hardly anything about this in the news?

Why isn’t this a top story right now? Has it ever been this whole time? We heard all about the climate talks in Paris… How come we’re just now hearing about this?

Obama will wax on all day about “climate change” right? Well methane is clearly much worse for the environment than the man-made carbon dioxide he’s always railing against and where has he been on this one? Pushing gun control? Golfing?

This leak has supposedly already released the equivalent of what would be released from six coal fired power plants (the ones he wants to regulate out of existence) over the span of twenty years… in just under two months. And it just keeps leaking at an alarming rate.

And the president hasn’t said a peep. Keep in mind, this leak was happening DURING the recent climate talks in Paris.

Kinda highlights the reality that the whole Paris UN climate thing he went on and on about a couple weeks ago is even more fake and pointless than most of us already knew it was.