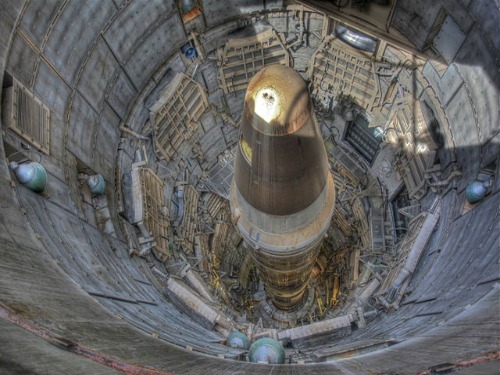 We all know that if there was ever a nuclear war, there would be massive civilian casualties. It’s pretty much impossible to nuke a military base without inflicting collateral damage, and all of the institutions that make governance possible, are located in or near cities. Not to mention all the factories that are required to keep a war machine in tip-top shape, which are frequently located around civilians.

However, the government has always been vague about whether they would intentionally strike civilians, for its own sake, during a nuclear war. We know our government deliberately targeted civilians with nukes during World War Two, but afterward they tried to distance themselves from those tactics, at least publicly. Behind the scenes however, the feds were (and probably still are) just as enthusiastic about “total war” tactics as they had ever been.

We know this with certainty now, after the U.S. declassified the Air Force’s list nuclear targets from the Cold War.

For the first time, the National Archives and Records Administration has released a detailed list of the United States’ potential targets for atomic bombers in the event of war with the Soviet Union, showing the number and the variety of targets on its territory, as well as in Eastern Europe and China.

It lists many targets for “systematic destruction” in major cities, including 179 in Moscow (like “Agricultural Equipment” and “Transformers, Heavy”), 145 in Leningrad and 91 in East Berlin. The targets are referred to as DGZs or “designated ground zeros.” While many are industrial facilities, government buildings and the like, one for each city is simply designated “Population.”

The 800 page document titled “Atomic Weapons Requirements Study for 1959” is little more than a spreadsheet for nuclear holocaust. It was part of the military’s “bomb as you go” strategy. At a time when ICBM’s had yet to be invented, Air Force bombers would be instructed to fly into Soviet air space, and hit whatever they could depending on the priority of the target. This spreadsheet determined that priority for the bombers, which included 1,100 air fields to prevent the Soviets from striking back, followed by countless industrial targets.Afterward, the deliberate massacre of civilians would begin.

What is particularly striking in the SAC study is the role of population targeting.  Moscow and its suburbs, like the Leningrad area, included distinct “population” targets (category 275), not further specified.  So did all the other cities recorded in the two sets of target lists. In other words, people as such, not specific industrial activities, were to be destroyed.   What the specific locations of these population targets were cannot now be determined. The SAC study includes the Bombing Encyclopedia numbers for those targets, but the BE itself remains classified (although under appeal).

The SAC study does not include any explanation for population targeting, but it was likely a legacy of earlier Air Force and Army Air Force thinking about the impact of bombing raids on civilian morale. For example, in a 1940 Air Corps Tactical School lecture, Major Muir Fairchild argued that an attack on a country’s economic structure “must be to so reduce the morale of the enemy civilian population through fear—of death or injury for themselves or loved ones, [so] that they would prefer our terms of peace to continuing the struggle, and that they would force their government to capitulate.”Thinking along those lines continued into the post-war period when social scientists studied the possible impact of nuclear bombing on civilian morale.

At the time, the US military was still operating under the same “total war” doctrine that had guided them from the end of the Civil War, until World War Two. If the destruction of the civilian population ever became necessary to win the war, then so be it. As General Curtis LeMay so aptly put it after he was asked about the firebombing of Japan “if the war is shortened by a single day, the attack will have served its purpose.”

In other words, our military always felt that it was okay to target civilians, so long as it led to the swift end of a war, and thus, fewer casualties for all parties in the long run. At least, that was their twisted moral justification for slaughtering civilians, and it’s clear that notion was the impetus behind this list of nuclear targets.

Let it never be forgotten, that this how our government views warfare. To them, the ends always justify the means, and the moment it becomes necessary to attain victory, civilians are indistinguishable from combatants. The people running our government pretend to act civilized statesman, but they have a lot more common with likes of Genghis Khan and Attila the Hun.