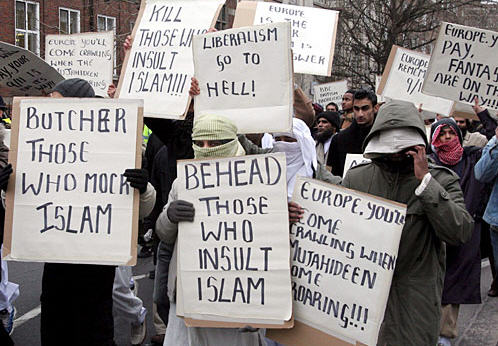 Dueling stories from the international media out of the Muslim world are shocking observers again today.

In Egypt, a Muslim man raped his toddler granddaughter, which led the little girl’s mother to murder her in an attempt to avoid a scandal.

The 59-year-old grandfather, identified as Faraj, waited for his daughter Merfat, 23, to go to bed before pulling her daughter out of bed and raping her in his room at their house in the East-central town of Sohag.

Newspapers said the mother, after discovering what happened, drowned her daughter in a water bucket to avert a scandal in the conservative countryside town.

While many (who haven’t been paying attention) may think that stories like this are not indicative of the entire Muslim world, usually, I might agree with you… but this kind of behavior is rampant across the Muslim world. (For example, read more about the practice of “bacha bazi” in Afghanistan here and here.) But just a cursory look at the teachings of the most important religious leader of Shia Muslims, the Ayatollah Khomeini, shows us the truth about Islam’s view of pedophilia (Start reading on page 56 for the pertinent teaching).

The point, disgusting as it is, is that this kind of behavior is rampant across the Muslim world because the teachings of Islam (in the Koran and other religious writings) allow it.

It’s not just sexual violence against children that is rampant in Islam. Violence against Christians is also a continuous problem in the Muslim world.

Just this past week in Mali, three Christians were killed outside of a Christian radio station as they stood in conversation. While the men were conversing, a fourth man approached and shot them all dead.

Although no group has claimed responsibility for the attack, there has been an upsurge in jihadist attacks in Mali, including the recent incident at the Radisson Blu hotel in Bamako on 20 Nov., when 22 people were killed.

Christians, a minority in Mali, have paid a heavy price since jihadists took over northern Mali in 2012. For most of the year, armed Islamist groups ruled the region, banning the practice of other religions and desecrating and looting churches and other places of worship. Thousands, including many Christians, fled and found refuge in the south, or in neighbouring countries such as Niger and Burkina Faso…

The loss sustained by Christians across northern Mali amounted to hundreds of millions of CFAs, the local currency, as World Watch Monitor reported in September 2014.

“The churches are in ruins: in Gao, in Niafounké, in Hombori and other towns occupied by jihadists,” Dr. Yattara told World Watch Monitor in September 2014. “We had this feeling that jihadists wanted to wipe out any trace of Christianity in the north of Mali. But God in his goodness has not allowed such an eventuality. The Church is still there and most of the believers have returned, albeit in very difficult conditions, without external assistance or the financial resources needed in such circumstances. And despite such adversity we are determined to resume our ministries because after all, this northern Mali is ours. We have the right to freely exercise our faith and we are firmly committed to make this happen.”

In 2013, Mali was ranked No. 7 on World Watch List, a ranking of the 50 countries where persecution of Christians is most severe.

Today, Christians make up the most persecuted people on the face of our planet.

“Christians and Christian communities are the most persecuted religious group on a global level, even in countries where they constitute a majority,” the report continued, “Offending, insulting and attacking Christians became almost legitimate and if Christians protest against these offenses, they are again accused of being opponents of free expression or of manifestation of rights of others.”

And it’s Islam doing the persecuting. (Only communist North Korea persecutes Christians as much as the Muslim world.)

“Approximately 100 million Christians are persecuted worldwide, making them one of the most persecuted religious groups in the world,” said an Open Doors statement announcing the report. “Islamic extremism is the main source of persecution in 40 of the 50 countries on the 2015 World Watch List.”

Nine of the 10 countries with the worst records for persecution of Christians have populations that are at least 50 percent Muslim, according to the assessment of persecution in the Open Doors USA’s World Watch List (WWL) 2015 and population information published by the State Department and the Central Intelligence Agency.

When you begin to put the pieces together, a pattern emerges. It’s a pattern that liberals and other Islam defenders won’t like, but it’s a true and recognizable pattern, nonetheless. Islam is a force for evil on our planet today, and it’s not just the terrorist extremists who are doing the damage… it’s regular ol’ Muslims too.