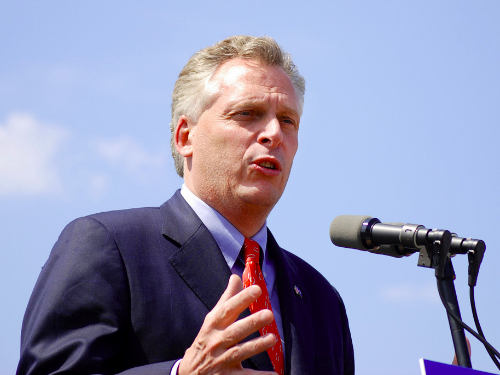 If there’s one thing anti-gun politicians all have in common, it’s hypocrisy. Anytime you see a politician pushing to restrict private gun ownership in some way, you can bet your bottom dollar that said politician probably has armed bodyguards protecting him at all times, and often at the expense of the tax payers. This is certainly true for Virginia Governor Terry McAuliffe.

Last week, his Attorney General announced that the State of Virginia would no longer recognize the concealed carry permits that are issued to citizens of 25 other states. This includes every state that borders Virginia with the exception of West Virginia. The order was given unilaterally, and will be in effect by February 1st, 2016. As for why this decision was made, apparently the laws regulating the issuance of permits in these states, were not strict enough.

The order has since raised the ire of Virginia’s GOP led legislature, who are trying to find some way to rescind the order. According to Senator Bill Carrico “A lot of the governor’s power is deferred to the General Assembly at that point and I’ll be getting with my collegues to circumvent everything this governor has done on this point,”

That’s not all. Carrico thinks the governor should be held to his own anti-gun standards. “I have a budget amendment that I’m looking at to take away his executive protection unit. If he’s so afraid of guns, then I’m not going to surround him with armed state policemen.”