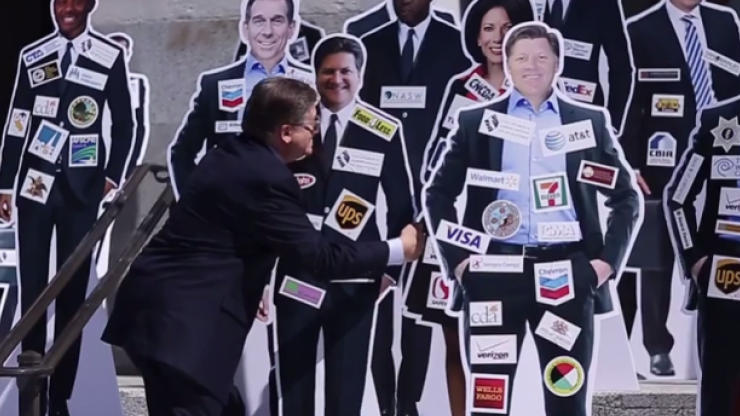 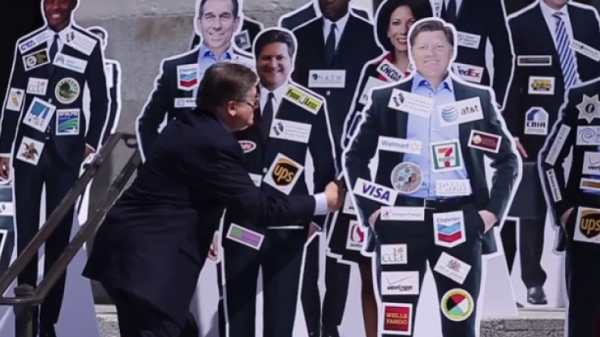 Popular memes calling for politicians to wear the logos of their corporate sponsors have circulated the internet for years, but the suggestion may soon be a reality for California legislators. In the next week, a potential ballot measure, submitted to the Office of the Attorney General in October, is expected to receive title and summary for the 2016 election, meaning its advocates will be able to collect signatures in order to secure its official place on the ballot. The proposed law would require legislators and candidates to sport the emblems of groups that donate money to their campaigns.

As the advocacy group that launched the measure, California is Not for Sale, muses:

“Imagine this: a California Senator is speaking on the floor and proposes a bill he just drafted that will give oil companies huge tax advantages. Now imagine if on his jacket, he was wearing Chevron, Shell, and BP logos – some of his top ten contributors. Our law will bring this under-the-table-corruption to the surface and expose these politicians who take political contributions in exchange for favors for what they really are: corrupt.”

The ballot’s sponsor, John Cox, is an entrepreneur from San Diego and long-time advocate of reforming the California legislature, which is rife with scandal and corruption. The legislature has been plagued withmultiple ethics violations and hearings, and last year, members of the governing body flew to Maui to meet with corporate executives and union bosses, who funded the trip by funneling funds through a non-profit organization. The Los Angeles Times reported on the doublespeak-inspired “Independent Voter Project,” which sponsored the event:

“The group gets its money from about 24 entities, many putting up at least $7,500. They include Occidental Petroleum Corp., the Western State Petroleum Assn., Eli Lilly, the Altria tobacco firm, the California Cable and Telecommunications Assn., the state prison guards union and the California Distributors Assn., which represents distributors of tobacco and other products.”

This ongoing political climate in Sacramento, California’s capital, has inspired Cox’s activism for years. Before launching the logo initiative, Cox promoted the idea of electing more legislators to provide more direct representation to California’s large voting population. Whereas New Hampshire has one representative for every 4,000 voters, California has one for about every 483,000. Considering most voters are opposed to adding more legislators, however, Cox developed California is Not for Sale.

At the end of August, the group organized a protest outside the state capitol building, setting up life-size cutouts of over 121 state legislators, including Governor Jerry Brown. They were all decorated with their corporate donors’ logos, from 7-11 to AT&T and Walmart. The demonstration was well-received, drawing significant attention from passersby and the lawmakers themselves.

At the end of October, Cox officially submitted a request to add the measure to the 2016 ballot. In addition to requiring lawmakers to wear the logos of their top ten contributors every time they appear in the legislature, the proposed measure would also require political candidates to disclose their top ten donors in political advertisements.

After filing the petition, Cox said, “It’s a corrupt system and it’s got to change,” adding that “[i]f they don’t take any money, they won’t have to wear any stickers.” He explained the goal was not to embarrass lawmakers or attack corporations, unions, and collective bargaining, but rather, to raise awareness about big money’s influence in politics. “I think many of them, most of them, are probably good people. But they’re caught in a corrupt system,” he said.

The group announced late Sunday it is “preparing to receive title and summary in the next week and will then begin collecting signatures across California.” They must receive 365,000 signatures to secure a spot on the 2016 ballot, and are confident they will meet the requirement. As Ryan Smith, a coordinator for California is Not for Sale, told Anti-Media, “We’ve received a tremendous amount of support from the community so far. People love this idea. Their entire lives they have felt helpless and abused by politicians; our measure puts the power back in their hands.”

Unsurprisingly, the initiative has drawn mixed reviews from lawmakers. Smith said the organization has received angry emails from some legislators demanding the group stop using life-size cutouts of their image. Senator Marty Block told San Diego’s local ABC affiliate that he “supports reasonable measures to provide more transparency to our legislative process,” but did not explicitly endorse the measure.

Though assembly member Rocky Chavez acknowledged the legislature needs more transparency, he argued that “[t]o have everyone decked out like race car drivers would be a circus element which wouldn’t really benefit the public.” Instead, he suggested requiring candidates and legislators to list their top ten donors on their websites, though this would likely mean far less exposure than displaying them on the floor of the legislature.

Asked about Chavez’s claim the proposed law would create a “circus element,” Smith responded, “You know what’s a circus? That politicians can openly take money from corporations and unions and have no accountability afterwards. It’s a complete joke. If Mr. Chavez doesn’t like this, I have a brilliant solution for him: stop taking money. Problem solved, circus avoided!”

Either way, one thing is clear: as Cox said, “These people are not going to change it on their own.” As California is Not for Sale’s website asserts, “Big money in politics has gone too far. Average citizens don’t have a voice and it’s time that changes. By highlighting big money in politics, we can raise awareness around this issue and give citizens the voice they deserve.” Smith says the proposed ballot measure is only the first of several steps the group will launch over the coming years, “all with the goal of ending political corruption in our country.”

To get involved with the measure, visit http://www.californiaisnotforsale.com or email[email protected].