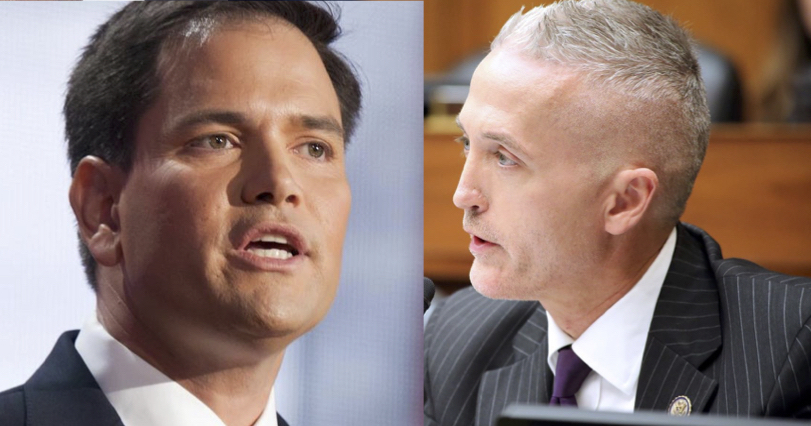 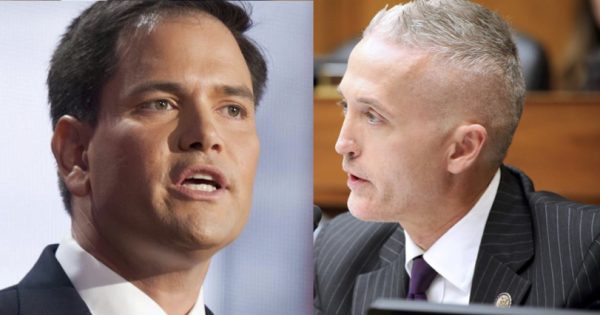 As I previously wrote concerning Trey Gowdy, I have had my doubts about him. Not only does Gowdy claim that no one can know what the Founders meant by Natural Born Citizen, something the Constitution demands a president be, but he has failed to bring forth any justice in the various committees that he sits on, including the Benghazi committee he chairs. Now, after hosting Marco Rubio in South Carolina and claiming he is constitutionally eligible to be president when he most certainly is not, Gowdy is apparently fully backing the Florida Senator in 2016.

“Marco is a rock solid conservative and a strong leader we can trust,” Gowdy said. “I look forward to campaigning in Iowa with him, and introducing my good friend to voters across the state.”

A Rubio campaign aide told CNN that Gowdy will offer Rubio his “full support” but stopped short of saying it will be an official endorsement for president.

So, Trey Gowdy believes Marco is a “rock solid conservative,” eh? However, Gowdy doesn’t address Rubio’s notorious Gang of Eight immigration bill from last year. He doesn’t address the fact that the men behind the 1,500-page bill dropped it just hours before the only hearing on the bill. Additionally, he never mentions that Rubio claims to not even know what was in his own immigration bill! Among the things that Rubio apparently didn’t know about was a $5,000 penalty for hiring US citizens over legalized aliens.

That’s just on the immigration front. As Scott Buss has pointed out, Rubio rightly says that Christians should ignore “laws” that demand we stop preaching the Gospel or perform a wedding for sodomites, but he fails to address Scripture condemning State-empowering, citizen-enslaving Socialist systems like Social Security, Medicare, Medicaid, Public Schools, etc.

You see true “conservatives” and Christians should hold to God’s Law when it comes to all these issues that have become a part of government, though they have no place at all among a free people. They do have a place in socialism though. And I constantly hear conservatives and Christians alike promote all those things. It really is a shame!

Marco Rubio has been caught lying about the trade deficit with Mexico in order to vote for Trade Promotion Authority for Barack Hussein Obama Soetoro Sobarkah earlier this year. He has supported foreign aid, which is nothing more than a redistribution of wealth from our country to another. He has also supported nation building when it comes to Iraq. How can he do this and still complain about the national debt being what it is? He’s a neo-conservative. That’s how.

The Florida Senator has not gotten behind border security, and as such, it has been said that he is indirectly helping Islamic terrorists coming across our southern border.

Rubio also believes America is democracy, but it’s a Republic.

His voting record is not too great either. As previously reported, Rubio has missed 11.6 percent of the votes in the Senate from January 2011 to October 2015, and in the month of October 2015 alone, he missed nearly 30 percent of the votes. You might say, “Well, he was campaigning for president,” and you would be right. However, consider that other senators who campaigned missed less votes: Ted Cruz was absent 23.4 percent, Lindsey Graham missed 22.6 percent, Bernie Sanders only missed 3.4 percent, and Rand Paul only missed an impressive 1.5 percent of the votes in October. He has a Freedom Index score of 80% when it comes to his voting in the Senate. Does it sound like Rubio has been doing his job?

UPDATE: Even Donald Trump is on this one:

"@mitchellvii: My prediction on the Trey Gowdy endorsement of Rubio is that it will do nothing for Rubio and finish Gowdy."

"@CAC8438: He supports amnesty and now they are so desperate that Trey Gowdy is going to campaign with him.

"@mitchellvii: Face it, Trey Gowdy failed miserably on Benghazi. He allowed it to drag out and in the end, let Hillary get away with murder.