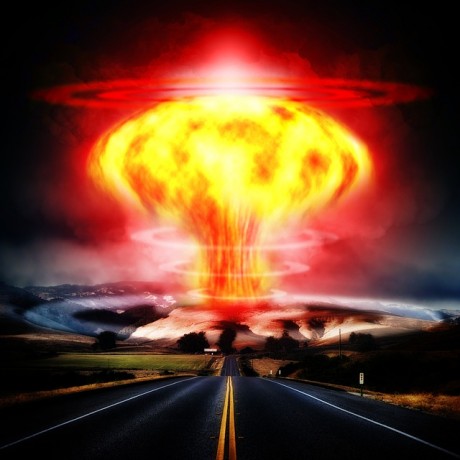 Did you know that there are 5 “too big to fail” banks in the United States that each have exposure to derivatives contracts that is in excess of 30 trillion dollars?  Overall, the biggest U.S. banks collectively have more than 247 trillion dollars of exposure to derivatives contracts.  That is an amount of money that is more than 13 times the size of the U.S. national debt, and it is a ticking time bomb that could set off financial Armageddon at any moment.  Globally, the notional value of all outstanding derivatives contracts is a staggering 552.9 trillion dollars according to the Bank for International Settlements.  The bankers assure us that these financial instruments are far less risky than they sound, and that they have spread the risk around enough so that there is no way they could bring the entire system down.  But that is the thing about risk – you can try to spread it around as many ways as you can, but you can never eliminate it.  And when this derivatives bubble finally implodes, there won’t be enough money on the entire planet to fix it.

A lot of readers may be tempted to quit reading right now, because “derivatives” is a term that sounds quite complicated.  And yes, the details of these arrangements can be immensely complicated, but the concept is quite simple.  Here is a good definition of “derivatives” that comes from Investopedia…

A derivative is a security with a price that is dependent upon or derived from one or more underlying assets. The derivative itself is a contract between two or more parties based upon the asset or assets. Its value is determined by fluctuations in the underlying asset. The most common underlying assets include stocks, bonds, commodities, currencies, interest rates and market indexes.

I like to refer to the derivatives marketplace as a form of “legalized gambling”.  Those that are engaged in derivatives trading are simply betting that something either will or will not happen in the future.  Derivatives played a critical role in the financial crisis of 2008, and I am fully convinced that they will take on a starring role in this new financial crisis.

And I am certainly not the only one that is concerned about the potentially destructive nature of these financial instruments.  In a letter that he once wrote to shareholders of Berkshire Hathaway, Warren Buffett referred to derivatives as “financial weapons of mass destruction”…

The derivatives genie is now well out of the bottle, and these instruments will almost certainly multiply in variety and number until some event makes their toxicity clear. Central banks and governments have so far found no effective way to control, or even monitor, the risks posed by these contracts. In my view, derivatives are financial weapons of mass destruction, carrying dangers that, while now latent, are potentially lethal.

So the problem of “too big to fail” is now bigger than ever.

If those banks go under, we are all in for a world of hurt.

Yesterday, I wrote about how the Federal Reserve has implemented new rules that would limit the ability of the Fed to loan money to these big banks during the next crisis.  So if the survival of these big banks is threatened by a derivatives crisis, the money to bail them out would probably have to come from somewhere else.

In such a scenario, could we see European-style “bail-ins” in this country?

Ellen Brown, one of the most fierce critics of our current financial system and the author of Web of Debt, seems to think so…

Dodd-Frank states in its preamble that it will “protect the American taxpayer by ending bailouts.” But it does this under Title II by imposing the losses of insolvent financial companies on their common and preferred stockholders, debtholders, and other unsecured creditors. That includes depositors, the largest class of unsecured creditor of any bank.

Title II is aimed at “ensuring that payout to claimants is at least as much as the claimants would have received under bankruptcy liquidation.” But here’s the catch: under both the Dodd Frank Act and the 2005 Bankruptcy Act, derivative claims have super-priority over all other claims, secured and unsecured, insured and uninsured.

The over-the-counter (OTC) derivative market (the largest market for derivatives) is made up of banks and other highly sophisticated players such as hedge funds. OTC derivatives are the bets of these financial players against each other. Derivative claims are considered “secured” because collateral is posted by the parties.

For some inexplicable reason, the hard-earned money you deposit in the bank is not considered “security” or “collateral.” It is just a loan to the bank, and you must stand in line along with the other creditors in hopes of getting it back.

As I mentioned yesterday, the FDIC guarantees the safety of deposits in member banks up to a certain amount.  But as Brown has pointed out, the FDIC only has somewhere around 70 billion dollars sitting around to cover bank failures.

If hundreds of billions or even trillions of dollars are ultimately needed to bail out the banking system, where is that money going to come from?

It would be difficult to overstate the threat that derivatives pose to our “too big to fail” banks.  The following numbers come directly from the OCC’s most recent quarterly report (see Table 2), and they reveal a recklessness that is on a level that is difficult to put into words…

As the “real economy” crumbles, major hedge funds continue to drop like flies, and we head into a new recession, there seems to very little alarm among the general population about what is happening.

The mainstream media is assuring us that everything is under control, and they are running front page headlines such as this one during the holiday season: “Kylie Jenner shows off her red-hot, new tattoo“.

But underneath the surface, trouble is brewing.

A new financial crisis has already begun, and it is going to intensify as we head into 2016.

And as this new crisis unfolds, one word that you are going to want to listen for is “derivatives”, because they are going to play a major role in the “financial Armageddon” that is rapidly approaching.