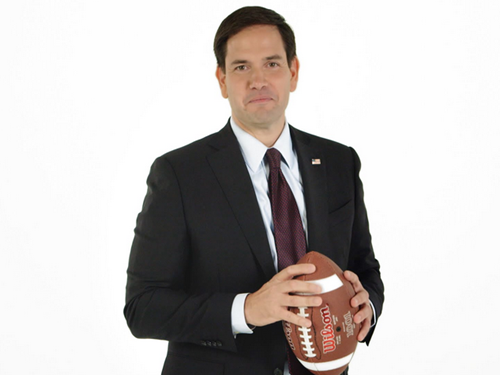 This guy is such a slick fake. If the Powers that Shouldn’t Be didn’t in some way really want him and his terrible politics in office, even as a potential VP, he wouldn’t still be in the running.

If you watched the last debate, it’s a good thing you finally got to see how authoritarian Rubio really is. He drooled all over the NDAA and begged for more NSA surveillance state to fight the turrurists. He was roaring for boots on the ground and more war in the Middle East. Don’t forget, not only was Rubio “totally committed” to Obama’s unconstitutional immigration bill, but he’s also Israeli billionaire Sheldon Adelson’s favorite GOP lapdog. In fact, while he’s perfectly fine with even more spying on Americans here at home (to keep you safe), he’s apparently somehow outraged that spying on Israel may be worse than reported (just so you know where his allegiances truly are first and foremost).

Well now he’s saying if he becomes president, the first thing he’s going to do is call for a Constitutional Convention to amend the U.S. Constitution:

“One of the things I’m going to do on my first day in office: I will announce that I am a supporter, and as president I will put the weight of the presidency behind a constitutional convention of the states so we can pass term limits on members of Congress and the Supreme Court and so we can pass a balanced budget amendment,” Mr. Rubio said in Iowa.

But he swears it would somehow (not sure how) be limited to only those issues:

“I think you’d have to limit the convention, and that’s what they’re proposing — a very limited convention on specific, delineated issues … like term limits and like a balanced budget amendment,” he said.

Uh huh. Sure. Because Congress can’t hardly wait to limit itself.

This is extremely dangerous.

While Rubio is saying it’ll be for things that make sense (like any of his politics make sense except to the establishment’s twisted agenda), things like Congressional and Supreme Court term limits and a balanced budget, COME ON. Is anyone really dumb enough to buy that?

Considering the geopolitical climate we’re all living in here in good ‘ol Murica at the moment, and the reality of who really owns Rubio, we all know once that door is opened even half an inch, it’ll get kicked off the hinges.