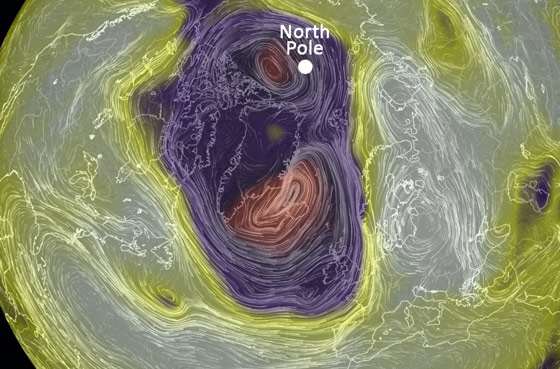 The storms that devastated the central United States over the Christmas holidays causing tornadoes and leaving scores of people dead has shifted to the North Pole where meteorologists say it is continuing to wreak havoc.

Temperatures at the North Pole, which are usually about 20 degrees below zero at this time of year, have spiked as much as 50 degrees in the last 24 hours creating what scientists call a “bomb cyclogenesis.”

From Tuesday evening to Wednesday morning, a mind-boggling pressure drop was recorded in Iceland: 54 millibars in just 18 hours. This triples the criteria for “bomb” cyclogenesis, which meteorologists use to describe a rapidly intensifying mid-latitude storm. A “bomb” cyclone is defined as dropping one millibar per hour for 24 hours.

“Consider the average winter temperature there is around 20 degrees below zero,” wrote the Capital Weather Gang’s Jason Samenow on Monday. A temperature around the freezing mark signifies a departure from normal of over 50 degrees, and close to typical mid-summer temperatures in this region.

In other words, the area around the North Pole was about as warm as Chicago on Wednesday, and quite a few degrees warmer than much of the Midwest.

The major shift in weather in the North Pole will no doubt lead climate change advocates to cite global warming as the cause.

But before we make any rash decisions like forcing new climate change legislation on the global public or implementing Al Gore’s carbon tax credit schemes on businesses who literally stand to lose trillions of dollars because of the new fees, let’s put the temperature changes into perspective. According to NOAA researchers, while the North Pole storm is outside of the norm, it is not unprecedented:

NOAA’s Ocean Prediction Center said the storm’s minimum pressure dropped to 928 millibars around 1 a.m. Eastern time, which likely places it in the top five strongest storms on record in this region.

“According to the center’s records, the all-time strongest storm in this area occurred on Dec. 15, 1986, and that had a minimum central pressure of 900 millibars,” Mashable’s Andrew Freedman reported on Tuesday. “The second-strongest storm occurred in January 1993, with a pressure of 916 millibars.”