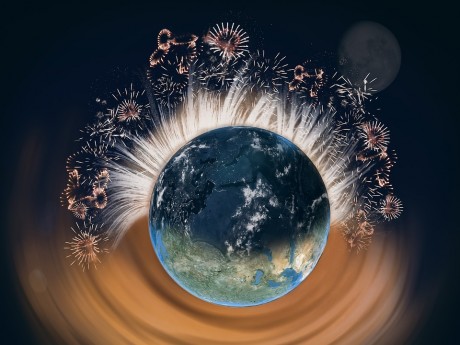 It’s official – 2015 was a horrible year for stocks.  On the last day of the year, the Dow Jones Industrial Average was down another 178 points, and overall it was the worst year for the Dow since 2008.  But of course the Dow was far from alone.  The S&P 500, the Russell 2000 and Dow Transports also all had their worst years since 2008.  Isn’t it funny how these things seem to happen every seven years?  But compared to other investments, stocks had a relatively “good” year.  In 2015, junk bonds, oil and industrial commodities all crashed hard – just like they all did just prior to the great stock market crash of 2008.  According to CNN, almost 70 percent of all investors lost money in 2015, and things are unfolding in textbook fashion for much more financial chaos in 2016.

Globally, over the past 12 months we have seen financial shaking unlike anything that we have experienced since the last great financial crisis.  During the month of August markets all over the world started to go haywire, and at one point approximately 11 trillion dollars of financial wealth had been wiped out globally according to author Jonathan Cahn.

Since that time, U.S. stocks rebounded quite a bit, but they still ended red for the year.  Other global markets were not nearly as fortunate.  Some major indexes finished 2015 down 20 percent or more, and European stocks just had their second worst December ever.

I honestly don’t understand the “nothing is happening” crowd.  The numbers clearly tell us that a global financial crisis began in 2015, and it threatens to accelerate greatly as we head into 2016.

Actually, there are a whole lot of people out there that would be truly thankful if “nothing” had happened over the past 12 months.  For example, there are five very unfortunate corporate CEOs that collectively lost 20 billion dollars in 2015…

Five CEOs of companies in the Russell 1000 index, including Nicholas Woodman of camera maker GoPro (GPRO), Sheldon Adelson of casino operator Las Vegas Sands (LVS) and even the famed investor Warren Buffett of Berkshire Hathaway (BRKA), lost more money on their companies’ shares than any other CEOs this year, according to a USA TODAY analysis of data from S&P Capital IQ.

These five CEOs were handed a whopping collective $20 billion loss on their company stock in 2015. Each and every one of these CEOs lost $1 billion or more – based on the average number of shares they’ve owned this year.

The biggest loser of the group was Warren Buffett.

Do you think that he believes that “nothing happened” this past year?

And if “nothing happened”, then why are hedge funds “dropping like flies” right now?  The following comes from Zero Hedge…

Two days, ago we noted that hedge funds are now dropping like flies in a year in which generating alpha has become virtually impossible for the majority of the vastly overpaid 2 and 20 “smart money” out there (and where levered beta is no longer the “sure thing” it used to be when the Fed was pumping trillions into stocks) when we reported that Seneca Capital, the $500 million multi-strat hedge fund belonging to Doug Hirsh (of Sohn Investment Conference fame), is shutting down.

And just within the last 24 hours, another very prominent hedge fund has collapsed.  SAB Capital, which once managed more than a billion dollars, is shutting down after huge losses this year.  Here is more from Zero Hedge…

It turns out that despite our intention, the question was not rhetorical because just a few hours later Bloomberg answered when it reported that the latest hedge fund shutdown casualty was another iconic, long-term investor: Scott Bommer’s SAB Capital, which as of a year ago managed $1.1 billion, and which after 17 years of managing money and after dropping roughly 11% in the first eight month of 2015, has decided to return all outside client money, and converting the hedge fund into a family office (after all one has to preserve one’s offshore tax benefits).

Overall, 674 hedge funds shut down during the first nine months of this year, and the final number for 2015 will actually be far higher because the rate of closings has accelerated as we have approached the end of this calendar year.  When the final numbers come in, I would not be surprised to hear that 1,000 hedge funds had closed up shop in 2015.

And this week we got a couple of new numbers that indicate that the U.S. economy is slowing down much faster than anticipated.

The Dallas Fed’s general business activity index plunged to -20.1 in December from -4.9 in November. This was much worse than the -7.0 expected by economists.

Any reading below 0 signals contraction, and this index has been below 0 all year.

The next big surprise was the Chicago purchasing manager index…

Any reading below 50 signals a contraction in business activity.

This was down from 48.7 in November and much worse than the 50.0 expected by economists.

When the final numbers for the fourth quarter are in a few months from now, I believe that they will show that the U.S. economy officially entered recession territory at this time.

And the truth is that deep recessions have already started for some of the other biggest economies on the planet.  For example, I recently wrote about the deep troubles that Canada is now experiencing, and things have already gotten so bad in Brazil that Goldman Sachs is referring to that crisis as “an outright depression“.

Many people seem to assume that since I have a website called “The Economic Collapse Blog” that I must want everything to fall apart.  But that is not true at all.  I love my country, I enjoy my life, and I would be perfectly content to spend 2016 peacefully passing the time here in the mountains with my wonderful wife.  The longer things can stay somewhat “normal”, the better it is for all of us.

Unfortunately, for decades we have been making incredibly foolish decisions as a society, and the consequences of those decisions are now catching up with us in a major way.

Jonathan Cahn likes to say that “a great shaking is coming”, and I very much agree with him.

In fact, I think that it is going to be here a lot sooner than most people think.

So buckle up, because I believe that 2016 is going to be quite a wild ride.