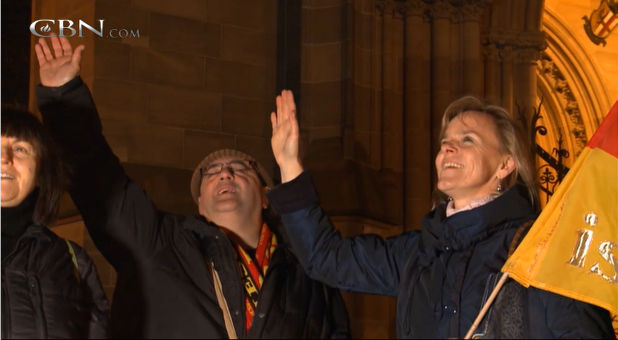 Heidi Mund, a Christian activist, has been accused of agitation of the people towards violence. She did no such thing. Heidi Mund spoke out against Muslim prayer in a Christian church (see video below). If this woman is imprisoned, it marks a turning point for Germany.

What she says here is true. Criminalization of truth.

This marks a true turning point if this woman is arrested. During the Nazi regime there were three stages that took place:

1) it became dangerous to speak out the truth
2) people started losing their jobs, faced fines and prison for their views
3) people with opposing views were killed…I think we are beginning to see stage 2 in Germany and to a slightly lesser degree here in the US.

Mund is now being charged with Volksverhetzung – agitation of the people towards violence. She could be fined perhaps or imprisoned but the intention is to silence criticism of Islam. Sharia for Germany.

Instigation/Agitation of the masses according to paragraph 130 of the criminal law book: A “Volksverhetzer” – One who is able to disturb the public peace and carries a sentence of 3 months to 5 years.

If Germany is serious in prosecuting hate speech (there’s a ban on Mein Kampf), then Merkel better start closing down mosques and banning the Quran.

And slay them wherever you come upon them, and expel them from where they expelled you; persecution is more grievous than slaying. But fight them not by the Holy Mosque until they should fight you there; then, if they fight you, slay them — such is the recompense of unbelievers, but if they give over, surely Allah is All-forgiving, All-compassionate. Fight them, till there is no persecution and the religion is Allah’s; then if they give over, there shall be no enmity save for evildoers. (Quran 2:191-193)

Men are the managers of the affairs of women for that Allah has preferred in bounty one of them over another, and for that they have expended of their property. Righteous women are therefore obedient, guarding the secret for Allah’s guarding. And those you fear may be rebellious admonish; banish them to their couches, and beat them. (Quran 4:34)

This is the recompense of those who fight against Allah and His Messenger, and hasten about the earth, to do corruption there: they shall be slaughtered, or crucified, or their hands and feet shall alternately be struck off; or they shall be banished from the land. That is a degradation for them in this world; and in the world to come awaits them a mighty chastisement. (Quran 5:33)

When thy Lord was revealing to the angels, ˜I am with you; so confirm the believers. I shall cast into the unbelievers’ hearts terror; so smite above the necks, and smite every finger of them! (Quran 8:12)

Make ready for them whatever force and strings of horses you can, to strike terror in the enemy of Allah and your enemy, and others besides them that you know not; Allah knows them. And whatsoever you expend in the way of Allah shall be repaid you in full; you will not be wronged. (Quran 8:60)

Then, when the sacred months are drawn away, slay the idolaters wherever you find them, and take them, and confine them, and lie in wait for them at every place of ambush. But if they repent, and perform the prayer, and pay the alms, then let them go their way; Allah is All-forgiving, All-compassionate. (Quran 9:5)

Fight those who believe not in Allah and the Last Day and do not forbid what Allah and His Messenger have forbidden — such men as practise not the religion of truth, being of those who have been given the Book — until they pay the tribute out of hand and have been humbled. (Quran 9:29)

Allah has bought from the believers their selves and their possessions against the gift of Paradise; they fight in the way of Allah; they kill, and are killed; that is a promise binding upon Allah in the Torah, and the Gospel, and the Koran; and who fulfils his covenant truer than Allah? So rejoice in the bargain you have made with Him; that is the mighty triumph. (Quran 9:111)

O believers, fight the unbelievers who are near to you; and let them find in you a harshness; and know that Allah is with the godfearing. (Quran 9:123)

When you meet the unbelievers, smite their necks, then, when you have made wide slaughter among them, tie fast the bonds; then set them free, either by grace or ransom, till the war lays down its loads. So it shall be; and if Allah had willed, He would have avenged Himself upon them; but that He may try some of you by means of others. And those who are slain in the way of Allah, He will not send their works astray. (Quran 47:4)

The State DA has become active against Heidi Mund – Accusing the radical Christian activist Heidi Mund of agitation against the people. She was accused after making “prayer suggestions” on Germany’s Day of Unity.

Since Heidi Mund moved her political agitation from the streets to the internet, hardly a day has gone by without a message for her followers. The former front woman for “Free Citizens” and “Pegida Rhein Main” has started another platform – “Save Europe” – which has the explicit goal of saving Europe from Islam.

On German Unity Day Mund called for a human chain around Germany to represent “a spiritual wall….(which) by God’s authority (would) withstand the powers of darkness.

“Hand in hand praying for our land” the radical Christian called for that act of rebellion/opposition which took place on October 3-4 – and which took place with a notable number of participants who had followed an advertisement by Heidi Mund. Her “prayer suggestions” fulfilled the requirements for the accusation of agitation of the people towards violence.

Her call to prayer included the following items:

“We pray for the real refugees, that they should again have hope for life, that our God will comfort them,…. (and) against the massive immigration of 90% young muslim men, who should not be building their own homeland here and that they should not rape our girls and women; that they should be send with the word of God – the Bible – back into their own home countries, there where they belong,… (We pray) against sickness and disease which the immigrants have brought with them,…We ask God for angels to stand on Germany’s borders as well as on the borders of Europe.” 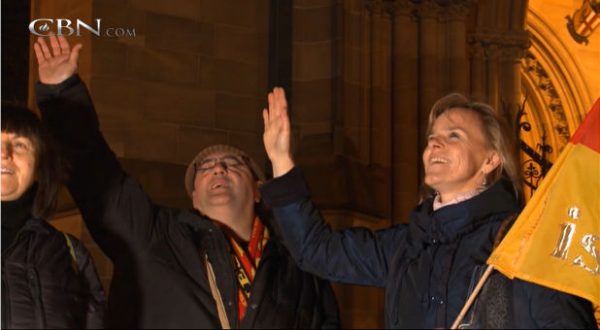