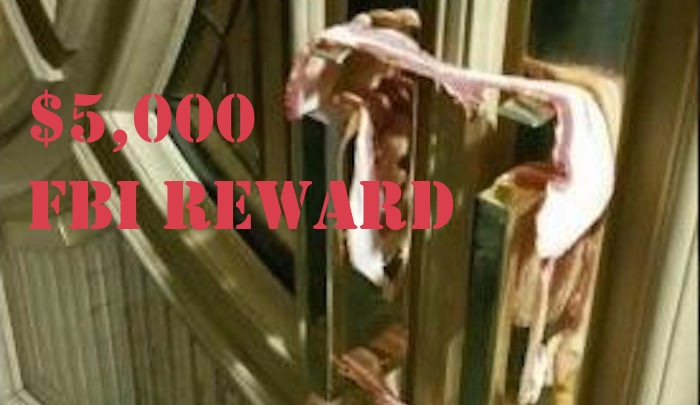 The FBI is now officially a joke.

When I first reported on this prank, the real story was not that bacon was left on the door handle of a mosque, but that Las Vegas police had launched a manhunt for the “perp.”

Las Vegas, America’s den of iniquity, gambling, prostitution, drugs …. but not bacon at a mosque. That, my friends, is Islamic law in America.

Attacks on synagogues are at record highs — real attacks with pipe bombs, swastikas,  desecration — never have we seen the FBI take real action, let alone offer vast reward sums. And in this case they did so for bacon that might have offended the sensibilities of devout Muslims.

Watch for Obama get involved in this. He could intone, “The future must not belong to those who leave bacon at mosques.” He could appoint a bacon-protection task force. They could be outfitted in grand uniforms featuring brown-and-beige stripes, to resemble a slice of bacon. Obama could name them The National Bacon Mosque Guards and commission them in an elaborate ceremony at the White House, after which they would march in formation to the nation’s mosques and take up watch against the greasy Islamophobic bacon bearers.

This story shows the lengths to which authorities in the U.S. will go to perpetuate their victimhood myth. Instead of just throwing the bacon away and dismissing it as a silly prank, it becomes part of the “climate of hate” against Muslims. You want a real “climate of hate,” check out the Christians who have been driven from their homes, exiled, killed, etc. in Iraq and Syria. No one is putting up $5,000 rewards for those who are persecuting them.

LAS VEGAS (AP) — The FBI is offering a $5,000 reward for information that helps them find the person who put raw bacon on the door handles of a Las Vegas mosque.

The FBI said in a statement Wednesday that agents are trying to find the man seen in a surveillance video putting the meat on the entrances of the Masjid-e-Tawheed mosque. Authorities call it a desecration of the Islamic worship center.

The Quran, the holy book of Islam, prohibits Muslims from eating pork, and pigs have been used to taunt or offend Muslims.

Both the FBI and Las Vegas police say they’re investigating the case as a possible hate crime.

Las Vegas police spokesman Larry Hadfield said the bacon was wrapped on the door knobs, and was also found on the ground and fences.

Officials at the mosque couldn’t immediately be reached for comment.

The FBI said the incident happened about 3:15 a.m. Dec. 27. The culprit is described as a white man wearing a dark blue hat, jacket and black-framed glasses. He had black or dark brown hair with long, thin sideburns.

The site west of the Las Vegas Strip wasn’t damaged, and no one was hurt. The mosque was empty at the time, and the case was reported by members who came to worship later that morning….