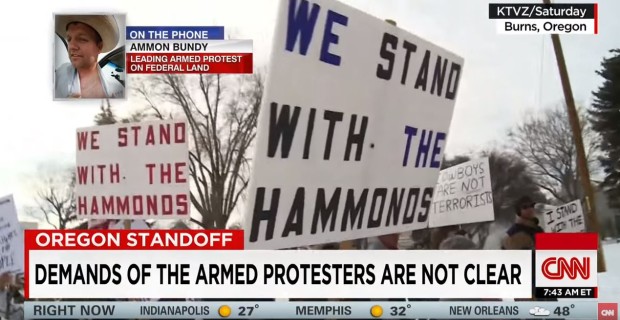 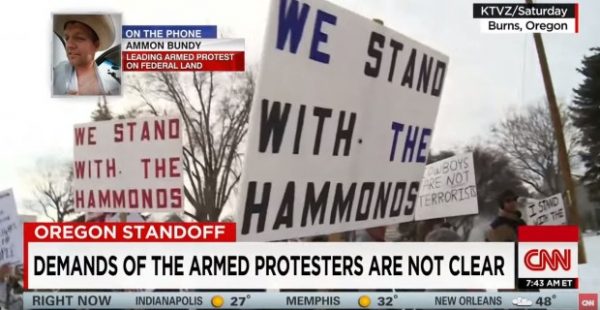 Some are concerned that the stand off in Oregon could be an ill-conceived move that will only serve to bolster President Obama’s gun control agenda as he prepares to unveil new executive orders to restrict firearms.

Obama will meet with Attorney General Loretta Lynch to discuss new gun control measures later today, with an expansion of background checks on gun sales set to be announced before his State of the Union address on January 12.

The timing is noteworthy given this weekend’s armed seizure of a federal building at the Malheur National Wildlife Refuge near Burns, Oregon by anti-government protesters.

A potential violent showdown between the feds and the protesters, who have vowed to defend themselves with force, would provide Obama with a perfect narrative that he could exploit to justify draconian new measures on gun ownership.

Prominent voices in libertarian circles are warning that the seizure of the federal building was a rash decision that could have disastrous consequences.

As Oath Keepers have highlighted, the Hammond family, which is at the center of the dispute with federal authorities, has insisted that it is not affiliated with the group that is occupying the wildlife refuge building.

“We cannot force ourselves or our protection on people who do not want it. Dwight and Steven Hammond have made it clear, through their attorney, that they just want to turn themselves in and serve out their sentence,” writes Stewart Rhodes. “And that clear statement of their intent should be the end of the discussion on this. No patriot group or individual has the right or the authority to force an armed stand off on this family, or around them, against their wishes. You cannot help someone who does not want your help, and who are not willing and ready to take a hard stand themselves.”

Alt-Market’s Brandon Smith called the seizure a “terrible plan,” noting that some protesters were misled as to the nature of the action and that the federal building has no symbolic importance, unlike the Bundy Ranch.

“It would appear that Ammon (Bundy) and team did NOT make clear their intentions to occupy the federal wildlife refuge building except to a select few, inviting protesters to “take a hard stand” without revealing what this would entail until they were already in the middle of it all,” writes Smith. “OPSEC? No, I think not. Obviously the goal was to lure as many protesters to Oregon as possible to the event in the hopes that they would jump on board with the stand-off plan once they were more personally involved. Numerous protesters were rightly enraged once they discovered the ultimate motives behind the event.”

Mike Vanderboegh also points out the convenience of the timing given Obama’s gun control push.

“For the regime, this could not come at a better time. The old Roman adage “cui bono” applies here. There is nothing on the talking heads channels as yet, but by Monday, when Obama meets with his Attorney General on the subject of citizen disarmament, you can bet the farm that this will play right into that narrative. Perfect timing. You’ve got to give the federal handlers of these pukes credit. This is precisely the sort of offensive action on the part of the “militia terrorists” that they needed.”

Meanwhile, leftists were almost salivating over the possibility of another Waco-style bloodbath, feverishly calling on the federal government to treat the militia as “terrorists,” with the hashtag #OregonUnderAttack trending all day yesterday.

The alarmism was so flagrant that other Twitter users soon began to make fun of the overreaction.

This pic was captured during white terrorists' recent assault on the wildlife refuge gift shop.#OregonUnderAttack pic.twitter.com/aPXPSykjDX

In demanding that the protesters be met with National Guard force, social justice warriors only served to expose their own hypocrisy.

In occupying public property in order to demonstrate against alleged abuse – whether justified or not – the Oregon protesters are merely replicating tactics used for years by ‘Black Lives Matter’ and Occupy Wall Street.

Occupying public property is now terrorism. Unless you're left-wing, then it's "social justice". #OregonUnderAttack pic.twitter.com/kllcLwODgM

Justified or not, it's a protest against government abuse of power. If Oregon is terrorism, then so is #BlackLivesMatter. #OregonUnderAttack

The difference between Oregon and Baltimore or Ferguson, is that the militia members seized an empty building in the middle of nowhere and caused zero damage, whereas ‘Black Lives Matter’ agitators burned down and looted businesses, with the tacit support of the liberal media.

Burning down a city = progressive