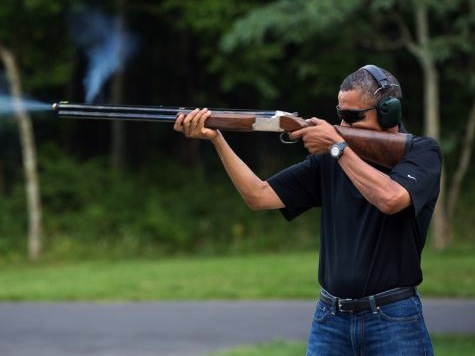 Even as critics in Congress are blasting Obama’s upcoming new gun control executive orders as “dangerous overreach” targeting the 2nd Amendment, Obama has defended them, claiming his plans are “well within my legal authority”.

“The good news is .. these are not only recommendations that are well within my legal authority and the executive branch, but they’re also ones that the overwhelming majority of the American people, including gun owners, support,” Obama said during a meeting with Attorney General Loretta Lynch and other advisers.

The new gun control measures are likely to be announced sometime this week. Wonder if another perfectly timed mass shooting will accompany them.

Even though the stock market fell yesterday, stocks in gun manufacturers like Smith & Wesson rose against the news. Pro gun control president Obama is perhaps the best gun salesmen in America, it seems.

“While we don’t yet know the details of the plan, the president is at minimum subverting the legislative branch, and potentially overturning its will. His proposals to restrict gun rights were debated by the United States Senate, and they were rejected. No president should be able to reverse legislative failure by executive fiat, not even incrementally. The American people deserve a president who will respect their constitutional rights – all of them. This is a dangerous level of executive overreach, and the country will not stand for it.” (source)

That’s great and all, but Paul Ryan doesn’t even sort of have a backbone, so this statement, while absolutely true, pretty much means zip.

In the meantime, the president will simply continue to chip away at the 2nd Amendment as much as he can before his final year is up, just as he has repeatedly threatened to do.