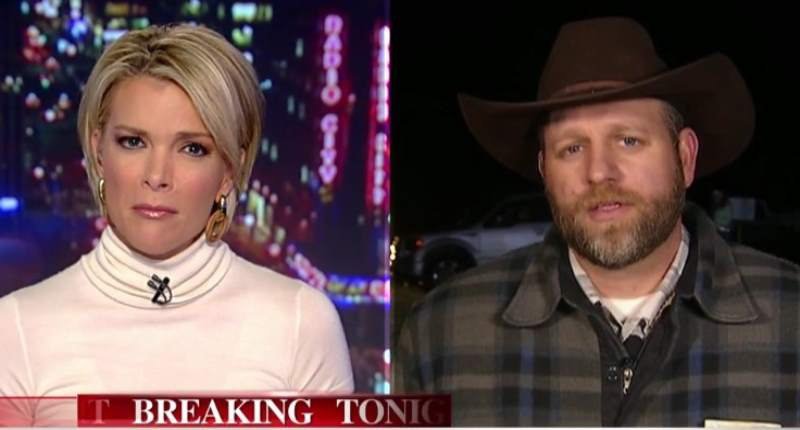 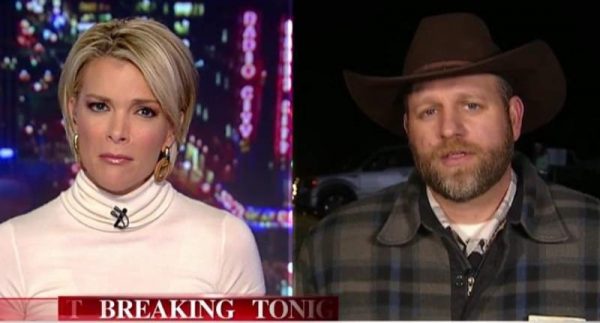 While FOX News’ Megyn Kelly may be a former attorney, she is obviously like most attorneys and has not studied constitutional law, but rather simply case law, which lies upon precedent, which can change with the wind, or the hot air breathed out by a slick lawyer. This was clearly demonstrated when Kelly was schooled on the Constitution by Ammon Bundy, as he stood on the ground of the Malheur National Wildlife Refuge.

To show you just how biased and ignorant of the Constitution the media is, Mediaite.com titled their version of the video below, “Megyn Kelly Destroys Bundy Mob Leader with Just an Icy Stare.”

Frankly, a more ridiculous headline could not have been written. For the record, read the comments section at Mediaite and notice the people were not deceived one bit by the headline, which is a good thing!

So, after allowing her colleague to recount the men of the Hammond family surrendering themselves to a federal prison in California, Kelly brought up unconstitutional Sheriff David Ward for some of the most backstabbing comments you could listen to from a sheriff in America.

“The Hammonds have turned themselves in,” said Ward.

Then, addressing the militia and protesters who came to redress their grievances against a tyrannical government, Ward stated, “It’s time for you to leave our community. Go home to your families and end this peacefully.”

The Sheriff should have been humiliated for his cowardice according to the Constitution, the involvement of the federal government in the matter to begin with and for not protecting citizens of his county from the usurpers of the Constitution. However, Oregon has an opportunity to right that particular wrong as Ward is up for re-election.

Bundy was then brought on and his compatriots, who number about 150, are calling themselves “Citizens for Constitutional Freedom.”

A good question was asked by an ignorant Constitutionalist (I’m referring to Kelly).

“How is what you are doing not lawlessness?” she asked.

“I think we have to go to the supreme law of the land to answer that question,” said Bundy. “And that is that the federal government does not have authority to come down into the states and to control its land and resources. That is for the people to do. And that is clearly stated in Article 1, [Section] 8, [Clause] 17 of the Constitution.”

That is exactly what I pointed out previously.

Of course, Kelly, instead of siding with the Constitution on the limitations of the federal government, switched to make an argument about the Fifth Amendment.

“But you know, the argument on the other side, which is these ranchers, who you support, but are not directly involved had their day in court and they were found guilty, and it went all the way up to the US Supreme Court, which denied their appeal,” Kelly said. “Isn’t that the way it’s supposed to work in our country when it come to the rule of law?”

“The Rule of law.” That phrase gets tossed around by people all across the spectrum, but in nearly every case I hear it, they never cite the law! They never find out what the rule, or measuring stick of the law is. Primarily it is to be the Word of God, and even when it comes to the Constitution, that is subservient to the Word of God, and is to be corrected by it. But these people know nothing of that!

I’d love to get Megyn Kelly to respond to the above video and tell us if she thinks this is in accord with the “rule of law.”

She failed to bring up the portion of the Fifth Amendment that is supposed to protect against Double Jeopardy, which this seems eerily like. However, instead of Bundy being destroyed, as Mediaite claimed, he took Kelly to task and exposed her ignorance.

“Who was the plaintiff?” asked Bundy.

This is where there was no “icy stare,” but a “I’m better than you and know more than you because I’m eye candy on a Fox News’ television show” kind of look. Kelly would not respond and so Bundy asked again only to be told that she asked the questions, not him.

So, this is where Kelly got schooled and should be ashamed for her embarrassing ignorance and condescending attitude.

Can you see where this is going?

“There is no proper redress because the design and structure of this government is not intended for the federal government to come down against individuals in a state on these matters, and that is what this is all about,” he added.

That is exactly right! This is about the limitations the Constitution imposes upon… not the people, but the elected officials and the government outlined in the Constitution!

Bundy hopes that things will not escalate to violence either.

“I have a family,” said Bundy. “I have six children, a beautiful wife. I have a wonderful home. I have a business, several employees. I’m not here to die. I’m here to defend my freedoms and my liberties, and will I? Yes, but it’s not going to come to that.”

I rate Mediaite’s claim that Kelly destroyed Bundy with 5 Pinnochios who have their pants on fire. Bundy explained what the Constitution said and the only stare from Kelly was one of, “I have no clue of what this guy is talking about.”