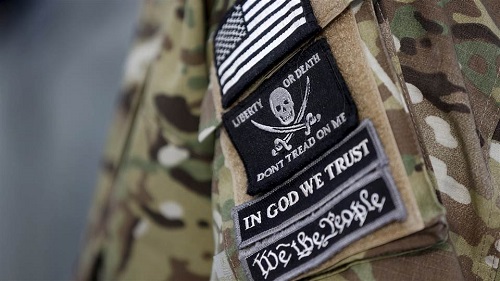 If internationalists were to get their way fully with the world and future historians write their analysis from a globalist perspective of the defunct American nation, they will probably say simply that our collapse was brought about by our own incompetence – that we were our own worst enemy. Yes, they would treat America as a cliché. They will of course leave out the destructive influences and engineered disasters of elitists, that would just complicate the narrative.

My hope is that we do not prove these future historians correct, and that they won’t have an opportunity to exist. My work has always been designed to help ensure that resistance thrives, but also that it is pursued in the most intelligent manner possible.

As I write this, China’s stock market has crashed 7% and was shut down by Chinese authorities who are once again initiating outright intervention to stem the tide. U.S. markets are quickly tracking lower. Oil is plummeting.

Relations between Saudi Arabia and Iran have turned ugly, with Iranian protesters overtaking the Saudi embassy and both sides vowing vengeance. Many Americans won’t care much about this because they think it has nothing to do with them. They don’t realize that Saudi Arabia has already publicly suggested a depeg from the U.S. dollar, effectively ending the decades-long relationship between the greenback and oil. The Iranian event and U.S. ties to both nations only make the fall of the dollar’s petro-status more likely in the near term.  With the U.S. in the middle, “taking a side” will be a demand.  I believe the U.S. government will NOT take a side, and this will elicit a furious response from Saudi Arabia (a currency depeg).

The Obama Administration has just made introductory announcements on new gun control measures through executive order.  These announcements were rather light on details and heavy on crocodile tears.  Their vagueness is clearly deliberate.  Psychological evaluations, redefining who is a lawful firearms dealer, “expanding” background checks; all of these measures could be interpreted broadly to mean almost anything.  We will probably know more in the coming weeks.

And in Oregon over the weekend, Ammon Bundy and friends lured hundreds of protesters under false pretenses using the Hammond family tragedy as a vehicle to then initiate a takeover of federal buildings that have no strategic or symbolic value, boxing themselves into a static position and proclaiming themselves to be the “tip of the spear” in the fight against corrupt government. In the meantime, anyone who questions the validity of this idea or the logic behind the “plan” is immediately labeled a coward and “keyboard warrior” by their supporters.  Emotionally manipulative arguments abound because there are no tactically rational arguments to be made, which tells me that the plan was doomed before it was implemented.

As I wrote in my article “Oregon standoff a terrible plan that we might be stuck with,” some people (not many but some) in the liberty movement are desperately clamoring for a fight; and they don’t care if the circumstances are intelligently executed or idiotically executed. They only care if it kicks off.

I openly supported and aided the efforts at Bundy Ranch because the ranchers were defending their home from clear federal aggression. The Feds were direct invaders in that scenario. In Oregon, protesters are being perceived as the invaders, not the defenders — and all launched in the name of the Hammond family, who asked them NOT to artificially create a standoff. The two scenarios are polar opposites, and Oregon will end in a very different fashion.

I would just like to note that the Founding Fathers were smart enough to avoid deliberately trapping themselves in static positions on land that had no strategic or symbolic importance while inviting the British to “come and get them”.  Again, there are right ways and wrong ways to fight tyranny.  Simply being willing to fight is not enough.

Now, if Americans are going to create standoff situations that could result in civil war they should do it over draconian gun control measures such as the use of classified government watch lists as grounds for denial of 2nd Amendment rights, rather than using a family who did not want armed support to begin with as a means to an end.

Keep in mind that watch lists are entirely arbitrary. There is no due process involved whatsoever, meaning you or I could walk into a gun store one day only to have our 4473 form denied because some bureaucrat in an office in D.C. decided we said something he doesn’t like and belong on a naughty list.  The changing of gun dealer laws could be used to erase gun shows and private sales of firearms as well.

A standoff scenario based on these issues would be a much more practical concept than what is taking place in Oregon.

As our situation in this country becomes more precarious, there are going to be far more flashpoints than anyone will be able to keep track of. It is inevitable that a fight between corrupt elements of the U.S. government and regular people will erupt. I and other analysts have been warning people about this for years. I have been educating people on their preparedness options and tactical resources. I have been promoting community preparedness teams in my work with Oath Keepers and helping to organize such teams in my own part of the country. I even designed the first working thermal evasion suit available to civilians to give people half a chance against advanced weaponry.  I have no illusions that a peaceful solution exists.  I know that there is no such solution at this point in the game.  But when the fighting starts, I also know that those who navigate the storm intelligently rather than allowing their emotions to get the best of them are more likely to survive and succeed.

I cannot say how quickly a crisis will develop. But, I can outline some of the many pitfalls you are going to come across as this storm rises.

You are going to stumble across numerous gung ho activists and even politicians who will claim they have the one and only solution, that they are the real “tip of the spear.” First, if you feel compelled to seek out leaders on the mere basis that they have offered to lead you, then you need to do some soul searching. Become your own leader first. And then, if you meet someone with an excellent plan and a principled motive, give him the time of day, but don’t jump blindly into any situation.

To summarize, if you are going to follow someone, know him well first, and make sure his planning is solid.

I’ve found that there are two very frustrating extremes within the liberty movement: the people who embrace pacifism and who refuse to even consider the possibility of a violent conflict and self-defense, and the people who have delusions of being the next George Washington and are ready to dive headlong into any violent confrontation without thinking because they want to cement their own legacy. Neither of these groups seems to be able to treat each event as unique: some events requiring a diplomatic approach and some of them requiring the violence of action.

The pacifists are annoying, but they mostly hurt themselves in their lack of preparedness and a warrior’s mindset. The hotheads are the real problem. If you are only looking for a fight, then one will certainly find you; but any moron can trigger a standoff with the Feds. The point is to be able to make a move that matters in the long run. Hotheads cannot think beyond themselves and their immediate needs. They are like mosquitoes mindlessly hunting for blood. Strategic planning is impossible for them and they will destroy allies in the process of their pursuits.

I hate to say it, but there is a distinct possibility that our current generation of freedom advocates and freedom fighters may not live to see the future we are working toward. That better world built on liberty, individualism and voluntary community is something our children will thrive in, not us. If you are not fighting with a long term strategy in mind, then you have missed the entire point.

Humans in crisis events tend to become more tribal in their associations in order to survive, and this is not necessarily a bad thing. I would rather live in a tribal world than under centralized corrupt government or global government any day. That said, if a “tribe” or faction does not respect the rights of the individual or uses unprovoked violence to achieve its goals, then it is no better than any other tyranny. Never trade safety for tyranny, regardless of the difficulties ahead.

The upside is tyrants of small tribes are easier to deal with than tyrants of large nations. They are no more bulletproof than anyone else, and they don’t have the resources to prevent reprisal if they hurt the wrong people.

Expect that families, neighborhoods, towns, churches, gangs and activist groups will rally around each other as a way to provide security. If you do not already have friends and family on board with your way of thinking, you will be isolated, making survival far more difficult if a breakdown does occur.

Governments Will Not Disappear

Does this mean people should not rebel against tyranny? No, it means that we have to fight smart and retain the moral high ground at all times. We must act in a way that exposes the true nature of corrupt government, rather than giving them more ammunition to shoot us down with in the public eye. Above all, if we fight we must fight TO WIN.  This means not deliberately searching for an Alamo.  Martyrs are ultimately useless in this kind of war because if we lose, no one will remember them anyway. Glory seekers and self-proclaimed prophets will only lead people to disaster.

Develop a tactical mindset because the future will require tactical minds. Maintain your principles no matter the threats ahead. Retain your humanity. But also, when the fight begins, fight with the intention of victory. Choose your ground wisely.