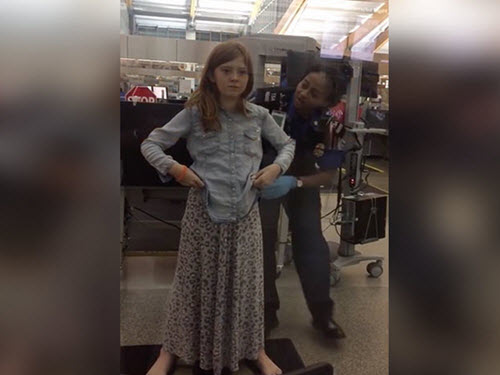 Father Kevin Payne is outraged after what he has deemed as a line-crossing two-minute pat down of  his 10-year-old daughter Vendela by TSA at the Raleigh-Durham International Airport. The additional security was triggered by a juice pouch Vendela accidentally left in her carry-on bag.

“It was excessive, it was invasive, I was pretty much boiling in my head,” he told ABC News. (source)

Payne recorded the pat down on his phone and uploaded the video to YouTube despite the fact that the TSA agent lied and told him that filming was not allowed (it absolutely is).

“While there was a SHOE BOMBER, Agent completely ignores shoes & quickly focuses on my 10 yr old child’s buttox, thighs & pelvic areas,” Payne wrote in the YouTube video of the incident he uploaded to YouTube.

It’s tough to watch the part where it appears the agent is going to lift the girl’s shirt. The girl reaches for the hem immediately, a pained look on her face at potentially being undressed in public. The agent pats down her thighs front and back multiple times and around the little girl’s breasts.

It really is hard to watch. Her father wrote that he felt like he was watching his 5th grade daughter get assaulted.

And yet, he stood by filming it and watching it happen…

It’s a wonder if Americans will ever rise up in mass and simply stop allowing themselves to be subjected to this guilty-until-proven-not-a-terrorist behavior. If everyone across the country simply refused fly for even one whole day to boycott this, it would stop. Instead, our nation’s citizens continue to diligently trudge through the airports and subject themselves and their children to be groped and in some cases sexually assaulted by government goons day in and day out.

It’s ridiculous, especially considering the TSA has already been found to completely fail at doing its job 95% of the time…