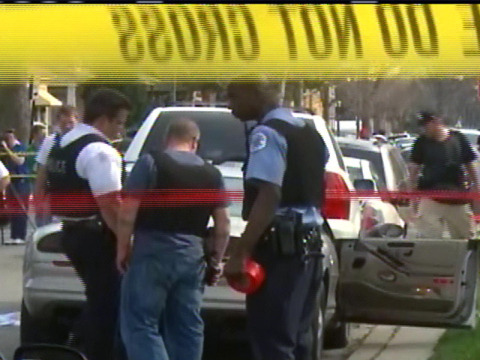 2,995 people were shot in Chicago last year. Shootings were up, way up, in Baltimore. With an assist from Al Sharpton and #BlackLivesMatter, Baltimore beat out Detroit. But Detroit is still in the running. Chicago, Baltimore and Detroit all have something in common, they’re all run by the party of gun control which somehow can’t seem to manage to control the criminals who have the guns.

The murder rate in Washington, D.C., home of the progressive boys and girls who can solve it all, is up 54%. The capital of the national bureaucracy has also been the country’s murder capital.

These cities are the heartland of America’s real gun culture. It isn’t the bitter gun-and-bible clingers in McCain and Romney territory who are racking up a more horrifying annual kill rate than Al Qaeda; it’s Obama’s own voting base.

Gun violence is at its worst in the cities that Obama won in 2012. Places like New Orleans, Memphis, Birmingham, St. Louis, Kansas City and Philly. The Democrats are blaming Republicans for the crimes of their own voters.

Chicago, where Obama delivered his victory speech, has homicide numbers that match all of Japan and are higher than Spain, Poland and pre-war Syria. If Chicago gets any worse, it will find itself passing the number of murders for the entire country of Canada.

But Chicago isn’t even all that unique. Or the worst case scenario. That would be St. Louis with 50 murders for 100,000 people. If St Louis were a country, it would have the 4th highest murder rate in the world, beating out Jamaica, El Salvador and Rwanda.

New Orleans lags behind with a 39.6 murder rate. Louisiana went red for Romney 58 to 40, but Orleans Parish went blue for Obama 80 to 17. Obama won both St. Louis and Baltimore by comfortable margins. He won Detroit’s Wayne County 73 to 26.

Homicide rates like these show that something is broken, but it isn’t broken among Republican voters rushing to stock up on rifles every time Obama begins threatening their right to buy them; it’s broken among Obama’s base.

Any serious conversation about gun violence and gun culture has to begin at home; in Chicago, in Baltimore, in New York City, in Los Angeles and in Washington, D.C.

Voting for Obama does not make people innately homicidal. Just look at Seattle. So what is happening in Chicago to drive it to the gates of hell?

A breakdown of the Chicago killing fields shows that 83% of those murdered in Chicago in one year had criminal records. In Philly, it’s 75%. In Milwaukee it’s 77% percent. In New Orleans, it’s 64%. In Baltimore, it’s 91%. Many were felons who had served time. And as many as 80% of the homicides were gang related.

Chicago’s problem isn’t guns; it’s gangs. Gun control efforts in Chicago or any other major city are doomed because gangs represent organized crime networks which stretch down to Mexico. And Democrats pander to those gangs because it helps them get elected. That’s why Federal gun prosecutions in Chicago dropped sharply under Obama. It’s why he has set free drug dealers and gang members to deal and kill while convening town halls on gun violence.

America’s murder rate isn’t the work of the suburban and rural homeowners who shop for guns at sporting goods stores and at gun shows, and whom the media profiles after every shooting, but by the gangs embedded in urban areas controlled by Democrats. The gangs who drive up America’s murder rate look nothing like the occasional mentally ill suburban white kid who goes off his medication and decides to shoot up a school. Lanza, like most serial killers, is a media aberration, not the norm.

National murder statistics show that blacks are far more likely to be killers than whites and they are also far more likely to be killed. The single largest cause of homicides is the argument. 4th on the list is juvenile gang activity with 676 murders, which combined with various flavors of gangland killings takes us nearly to the 1,000 mark. America has more gangland murders than Sierra Leone, Eritrea and Puerto Rico have murders.

Our national murder rate is not some incomprehensible mystery that can only be attributed to the inanimate tools, the steel, brass and wood that do the work. It is largely the work of adult males from age 18 to 39 with criminal records killing other males of that same age and criminal past.

If this were going on in Rwanda, El Salvador or Sierra Leone, we would have no trouble knowing what to make of it, and silly pearl-clutching nonsense about gun control would never even come up. But this is Chicago, it’s Baltimore, it’s Philly and NOLA; and so we refuse to see that our major cities are in the same boat as some of the worst trouble spots in the world.

Lanza and Newtown are comforting aberrations. They allow us to take refuge in the fantasy that homicides in America are the work of the occasional serial killer practicing his dark art in one of those perfect small towns that always show up in murder mysteries or Stephen King novels. They fool us into thinking that there is something American about our murder rate that can be traced to hunting season, patriotism and bad mothers.

But go to Chicago or Baltimore. Go where the killings really happen and the illusion comes apart.

There is a war going on in America between gangs of young men who bear an uncanny resemblance to their counterparts in Sierra Leone or El Salvador. They live like them, they fight for control of the streets like them and they kill like them.

As David Kennedy, the head of the Center for Crime Prevention and Control, put it, “The majority of homicide victims have extensive criminal histories. This is simply the way that the world of criminal homicide works. It’s a fact.”

America is, on a county by county basis, not a violent country, just as it, on a county by county basis, did not vote for Obama. It is being dragged down by broken cities full of broken families whose mayors would like to trash the Bill of Rights for the entire country in the vain hope that national gun control will save their cities, even though gun control is likely to be as much help to Chicago or New Orleans as the War on Drugs.

Obama’s pretense that there needs to be a national conversation about rural American gun owners is a dishonest and cynical ploy that distracts attention from the real problem that he and politicians like him have sat on for generations.

(A version of this article originally appeared at Front Page Magazine.)