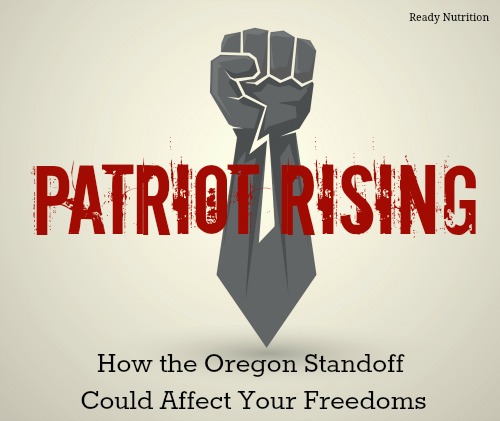 ReadyNutrition Readers, we’re about to start the New Year off right, even though it seems the year is starting off on the wrong foot.  The problem is, it wasn’t on the “right” foot last year, and the problems are becoming both more pronounced and exacerbated.  We closed the year on a good note here, and we’re going to open on a good note: think positive.  Even with all of these things happening, you’re still here and still dedicated to what brought you to this site.  Continue to plan, prepare, and interact.  An old Roman proverb:“Survive, and you succeed,” is a good phrase to keep in mind.

As of this writing, the standoff in Oregon seems to be growing, with the three sons of rancher Cliven Bundy and almost 200 supporters (many among them militiamen from other states) taking a stand on Federal property.  The Bundy sons and their allies have commandeered the headquarters of the Malheur National Wildlife Refuge.  They are attempting to set up a control point that they intend to occupy “for years” if necessary. Ammon Bundy posted a phrase on his Facebook page, as follows:

“ALL PATRIOTS IT’S TIME TO STAND UP FOR OUR RIGHTS AND NOT STAND DOWN!!! WE NEED YOUR HELP!!! COME PREPARED.”

He has implored people to help him, saying that the time is right.  Readers, his efforts are to be lauded, as well as those supporting him.  Let’s just present a few thoughts in this article, and hopefully he and his brothers will read them and keep them in mind.

The heinous thing pertaining to this event is that it will certainly be used as “justification for the new set of EO’s (Executive Orders) that Obama has rolled out.  Readers, JJ is not stating the cause of the Bundy brothers and their allies is either unjustified or unworthy; rather that they need to rethink the playbook from a more strategic perspective.

The funnel to place firearms owners and those who uphold the 2nd Amendment in categories of “extremists” or “fringe radicals” will not stop.  Certainly (as already mentioned) this episode will be used as propaganda to that end; that funneling by the government to solidify its attempt to take the guns will only continue to grow.  Knowing that, the protestors do not need to mass in one target-grouping that either a drone or a bomb can extinguish in a second.

As survivor-oriented preparation-minded citizens, it is your job to figure all of the odds before the game begins.  Please read and reread Sun Tzu’s “Art of War” on how to carry out all of your missions, because the book does not pertain only to combat.  Sun Tzu wrote, “The zenith of skill as a general is to win a battle without fighting.”

If you’re going to fight, then fight to win, and fight smart…especially when engaged with numerically and logistically superior forces.  Win the public support and you throw a damper in their plans.  Bypass the MSM with continuous broadcasts, twitters, tweets, and what have you to keep the government and the MSM from stifling the true story or twisting it.

We all face a big challenge this year: staying focused on the business of preparing at hand, while the forces around us move at an incrementally slow speed.  It takes those two things that I mentioned last year: resolve and patience.  Regarding these things mentioned here, have the resolve to stand up and face the challenges, on a daily basis…for the “long haul” and the patience to choose your own ground of battle, your own arena of struggle.

May this New Year bring you success in all you do as individuals and with your families.  Keep up the good fight, and remember to not just fight hard…but fight smart!  We love hearing from you.  May God bless you and your families.  JJ out!