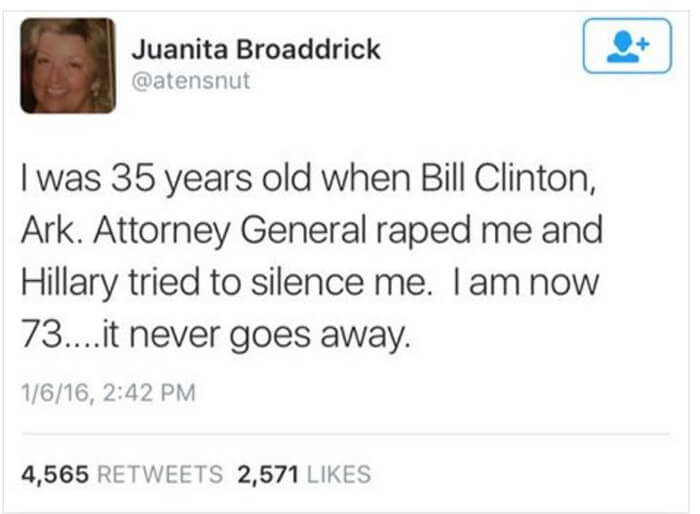 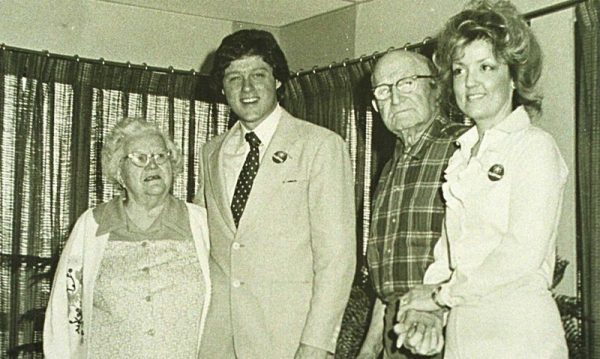 Remember back in November when Hillary Clinton attempted to pander to the millennial, feminist generation by tweeting that EVERY woman who claimed she had been sexually assaulted should be “believed” and “supported”? It caused a bit of a mess for Mrs. Clinton because her husband is a well-known sexual deviant who has been accused of sexual assault or rape by no less than 10 women and who has had extramarital affairs with at least eight women (that we know of).

Every survivor of sexual assault deserves to be heard, believed, and supported. https://t.co/mkD69RHeBL

The Internet response crashed like a tsunami onto the Clinton campaign, and Mrs. Clinton was forced to weather the self-inflicted maelstrom for days after her comment and tweet went viral.

However, another storm is brewing, as one of Bill Clinton’s victims is once again raising her voice for justice. Juanita Broaddrick was raped half-a-lifetime ago by Bill Clinton, and in 37+ years since she has been forced to suffer indignity after indignity as the Clinton family continues to smear and slander her. From the looks of it, though, Broaddrick plans on making the upcoming election as hard as she can on Mrs. Clinton.

I was 35 years old when Bill Clinton, Ark. Attorney General raped me and Hillary tried to silence me. I am now 73….it never goes away.

Back in 1999 Broderick told NBC what happened that horrible night.

From Wikipedia (where you can find their sources):

Then he [Bill Clinton] tries to kiss me again. And the second time he tries to kiss me he starts biting my lip … He starts to, um, bite on my top lip and I tried to pull away from him. And then he forces me down on the bed. And I just was very frightened, and I tried to get away from him and I told him ‘No,’ that I didn’t want this to happen but he wouldn’t listen to me. … It was a real panicky, panicky situation. I was even to the point where I was getting very noisy, you know, yelling to ‘Please stop.’ And that’s when he pressed down on my right shoulder and he would bite my lip. … When everything was over with, he got up and straightened himself, and I was crying at the moment and he walks to the door, and calmly puts on his sunglasses. And before he goes out the door he says ‘You better get some ice on that.’ And he turned and went out the door.”

Lest you think this was just another attempt by the “vast right-wing conspiracy” to bring down the Clinton family, here’s some more interesting info from the Broaddrick case.

Broaddrick’s account cooresponded with other women’s allegations. In an interview that emerged after Broaddrick’s allegations, Elizabeth Gracen said that Clinton got carried away and bit her lip during a consensual encounter that became rough. Broaddrick said that after the assault, Clinton told her not to worry about pregnancy because childhood mumps had rendered him sterile. When contacted about the issue, Gennifer Flowers, who Clinton admitted to a sexual encounter with, agreed that Clinton had thought he couldn’t have children.

Reading and rereading Broaddrick’s Tweet about her 37+ years of pain and humiliation, I could not help but feel heart-broken for her. Bill Clinton is an evil sexual deviant who violently abuses women for his own gratification, but instead of decrying his behavior and demanding justice, liberals (especially liberal women) fawn and dote over him.

Chappaquiddick. I mean, a girl drowns and he abandons her and she drowned and women still voted for Teddy Kennedy. Why? Because he voted for women’s rights. That’s why. That’s the bottom line of it in my opinion. I mean, I don’t like either one of them, to tell you the truth, Teddy or Bill. They’re both dogs as far as I’m concerned. But I still will vote for Bill Clinton because he votes in my favor.