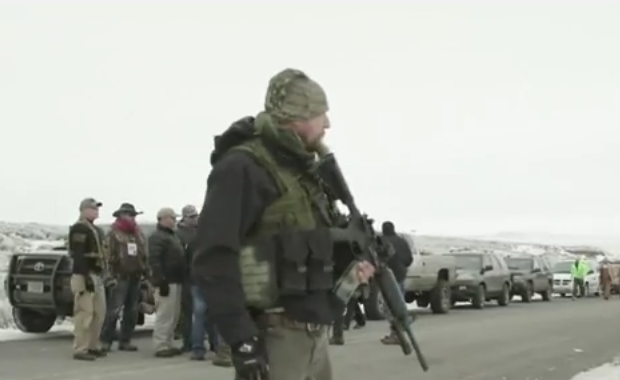 III%ers, other groups, arrive at Oregon occupation, attempt to contact Sheriff and FBI to deescalate situation

McFarlane’s comment comes after the FBI commandeered two buildings in town, a school and the local airport, interfering with locals lives, as they further gear up to ultimately respond to the public occupation of the Malheur National Wildlife Refuge building which sits on public land.

Regardless of what the corporate controlled press has reported, to this point the occupiers of the wildlife refuge have not broken any laws and have kept their protest peaceful.

“We need to transition and hand over the baton to the local people who are stepping up to the plate, the Harney County Committee of Safety,” McFarlane said.

One of the group’s five founders, Brandon Curtiss, President of III% Idaho, took charge of the situation around noon and addressed the press at the podium, saying that the group is there strictly to help moderate a “peaceful resolution” and provide security for the ranchers, members of the community and police.

We want to “deescalate this peacefully,” Curtiss said.

Another one of the group’s co-founder’s Joseph Rice told the press:

“We’ve got to get a dialogue started. […] So far there has been rhetoric, but there hasn’t been anything put on the table to drive this resolution and we’ve got to get that going.”

So far both the Sheriff and FBI have refused to open a dialogue with the Pacific Patriot Network in effort to negotiate and eventually defuse the occupation.

It has also been reported that the FBI is running heavy PSYOPs on the group and townspeople as a realtime information war ensues.

Update: 1:16 p.m. local time, SATURDAY: Ryan Bundy told Intellihub that Brandon Curtiss, President of III% Idaho, has told the FBI to not be aggressive with their actions.