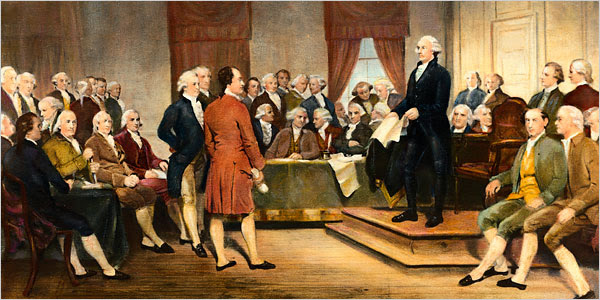 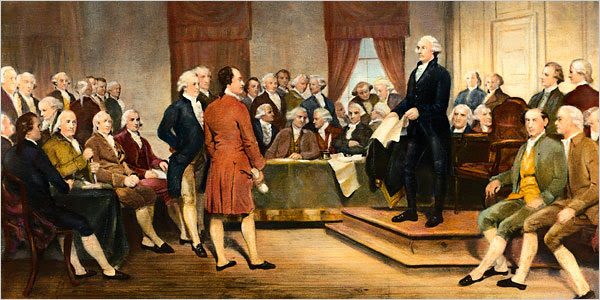 Many members of the political-media establishment are either deliberately misrepresenting facts for political reasons or they are simply ignorant of those facts, that is, the manner in which one becomes a citizen as opposed to the concept of natural born citizenship.

In addition, many people mistakenly cite English Common Law as the origin of the natural born citizen concept, which, in that regard, the Founders rejected; rather than its true origin, the codification of natural law described by Emerich de Vattel in his 1758 book “The Law of Nations.”

January 14, 1975 – Democrat House Rep. Jonathon B. Bingham, [NY-22] introduced a constitutional amendment under H.J.R. 33: which called for the outright removal of the natural-born requirement for president found in Article II of the U.S. Constitution – “Provides that a citizen of the United States otherwise eligible to hold the Office of President shall not be ineligible because such citizen is not a natural born citizen.”

September 3, 2003 – Democrat Rep. John Conyers [MI] introduced H.J.R. 67: – “Constitutional Amendment – Makes a person who has been a citizen of the United States for at least 20 years eligible to hold the office of President.”

September 15, 2004 – Republican Rep. Dana Rohrabacher [CA-46] introduced H.J.R. 104: – “Constitutional Amendment – “Makes eligible for the Office of the President non-native born persons who have held U.S. citizenship for at least 20 years and who are otherwise eligible to hold such Office.”

According to Article II, Section I, Clause 5 of the U. S. Constitution, a candidate for the Presidency must be a “natural born citizen,” that is, a second generation American, a U.S. citizen, whose parents were also U.S. citizens at the time of the candidate’s birth.

That there is a difference between “citizen” and “natural born citizen” has been clear since the writing of the U.S. Constitution on September 17, 1787 and its ratification on June 21, 1788.

A first draft of what would become Article II, Section 1, Clause 5, submitted by Alexander Hamilton to the Constitutional Convention on June 18, 1787 stated:

Fearing foreign influence on the President and Commander in Chief of the American military, the future first U.S. Supreme Court Justice, John Jay, on July 25, 1787, asked the convention presiding officer George Washington to strengthen the requirements for the Presidency:

“Permit me to hint, whether it would be wise and seasonable to provide a strong check to the admission of Foreigners into the administration of our national Government; and to declare expressly that the Command in Chief of the American army shall not be given to nor devolve on, any but a natural born Citizen.”

The term “or a Citizen of the United States at the time of the Adoption of this Constitution” referred to loyal Americans who lived in the thirteen colonies at the time of the Revolutionary War, thus establishing the first generation of United States “citizens,” upon which future “natural born” citizens would be created. The Founders, under Article II, allowed these original U.S. citizens to be eligible for the Presidency.

As understood by the Founders and as applied to the U.S. Constitution, the term “natural born citizen” derived its meaning less from English Common Law, than from Vattel’s “The Law of Nations.”

They knew from reading Vattel that a “natural born citizen” had a different standard from just “citizen,” for he or she was a child born in the country to two citizen parents (Vattel, Section 212 in original French and English translation).

There are historical arguments too numerous to include in a short article, which explain why the definition of “natural born subject,” as found in the English Common Law, was not used as the basis of “natural born citizen” in the U.S. Constitution because Great Britain was a monarchy and the new nation was a constitutional republic.

Legal precedent and interpretation leave no doubt regarding the meaning of “natural born citizen.”

“The citizens are the members of the civil society; bound to this society by certain duties, and subject to its authority, they equally participate in its advantages. The natives or indigenes are those born in the country of parents who are citizens.”

“The citizens are the members of the civil society; bound to this society by certain duties, and subject to its authority, they equally participate in its advantages. The natives, or natural-born citizens, are those born in the country, of parents who are citizens.”

John Bingham, father of the 14th Amendment, which gave citizenship to American slaves after the Civil War, stated on the floor of the U.S. House of Representatives in 1862:

“All from other lands, who by the terms of [congressional] laws and a compliance with their provisions become naturalized, are adopted citizens of the United States; all other persons born within the Republic, of parents owing allegiance to no other sovereignty, are natural born citizens.”

In 1866, Bingham also stated on the House floor:

“Every human being born within the jurisdiction of the United States of parents not owing allegiance to any foreign sovereignty is, in the language of your Constitution itself, a natural born citizen.”

“The Constitution does not in words say who shall be natural-born citizens. Resort must be had elsewhere to ascertain that. At common law, with the nomenclature of which the framers of the Constitution were familiar, it was never doubted that all children born in a country of parents who were its citizens became themselves, upon their birth, citizens also. These were natives or natural-born citizens, as distinguished from aliens or foreigners. Some authorities go further and include as citizens children born within the jurisdiction without reference to the citizenship of their parents. As to this class there have been doubts, but never as to the first.”

“At common law, with the nomenclature of which the framers of the Constitution were familiar, it was never doubted that all children, born in a country of parents who were its citizens, became themselves, upon their birth, citizens also. These were natives, or natural-born citizens, as distinguished from aliens or foreigners.”

As recently as September 2008, in a Michigan Law Review article entitled “Originalism and the Natural Born Citizen Clause,” Lawrence B. Solum, then John E. Cribbet Professor of Law at the University of Illinois College of Law, wrote:

“What was the original public meaning of the phrase that establishes the eligibility for the office of President of the United States? There is general agreement on the core of its meaning. Anyone born on American soil whose parents are citizens of the United States is a natural born citizen.”

Just as the Presidential oath of office is unique “preserve, protect and defend the Constitution,” the eligibility requirements for President are equally unique, to ensure allegiance and prevent foreign influence at the highest levels of government.

I think the Founders had anticipated the mess in which we find ourselves today.