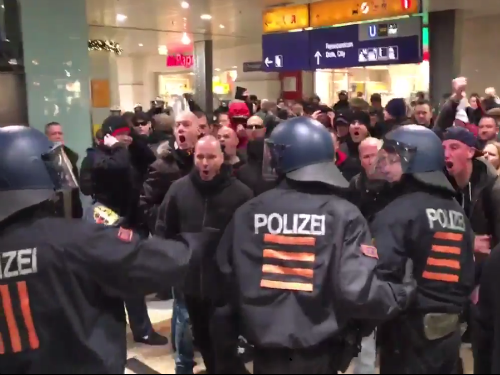 The horrifying mass sexual assaults that occurred in Cologne and other German cities on New Year’s Eve, as well as the subsequent cover-up of those events by the government and the media, has led to protests by the anti-migrant group known as PEGIDA. According to police estimates 1,700 people joined the North Rhine-Westphalian chapter of PEGIDA at the Cologne train station on Saturday.

They were met with 1,300 left-wing counter protesters, who decried the PEGIDA protesters, the sexual assaults against women, and Germany’s archaic sexual assault laws. 2000 state and federal police were present to keep the two groups apart. Reports have since trickled in, revealing that the police have used tear gas and water cannons against the right-wing protesters, after the police claimed that members of PEGIDA threw bottles and fire crackers at their officers. As a result, several of the protesters were arrested.

The sexual assaults in Cologne have sparked outrage around the country, and a shift in opinion towards the asylum seekers from the Middle East. Even the ardently pro-migrant Chancellor Merkel has been forced to toughen her stance towards the refugees, to placate the growing anger and unease over the situation. On Saturday she promised to deport criminals and reduce the overall number of migrants in the country. “Serial offenders who repeatedly rob or repeatedly affront women must feel the full force of the law.”