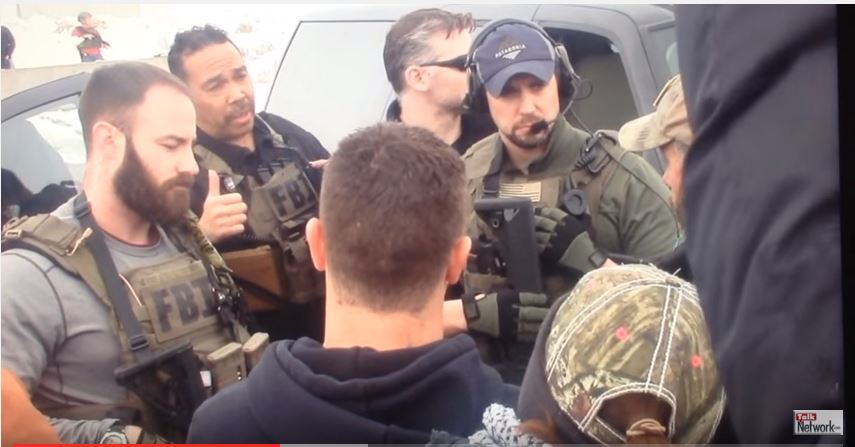 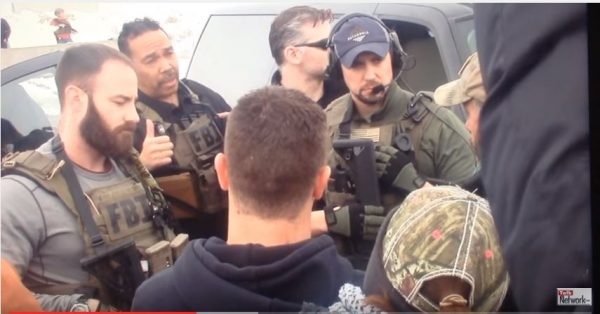 As previously reported Pete Santilli a well known radio show host and activist bullhorned the FBI compound in Burns, Oregon. In protest he read the Declaration of Independence out loud to the FBI, the most powerful message that could have been conveyed.

On January 9, 2016 the FBI was surprised to see a convoy of approximately 20 vehicles roll into the same compound Pete Santilli had previously bullhorned. Who were these people, and why were they there? They were the Idaho 3% militiamen, our patriots. While the FBI seemed to be caught off guard, not knowing what to think at first, tensions soon turned into understanding and dialog. Tensions were obviously high, but both the militia and the FBI handled themselves in a professional manner, ending with handshakes and smiles.

Idaho 3% have made it clear they are there to ensure peace on both sides. They will not allow aggression from the federal government, law enforcement, nor the patriots occupying the refuge. Their mission is to help open dialog, and keep the peace between the patriot protesters, local law enforcement, and the FBI while the controversy of the land dispute is ongoing. During this meeting, the FBI was spoken to about the grievances of the people, the townspeople wanting the FBI to leave their town, as well as asked to open an investigation into the Hammond’s case. The FBI took the grievances and stated they would deliver them to their chain of command.

Brandon Curtiss of Idaho 3% was interviewed by Mr. Santilli after this successful mission was accomplished. Mr. Curtiss exposes they have new evidence BLM and not lightning started the fires in which the Hammond’s put out by starting a backburn. Yes, this is the same backburn the Hammond’s are currently in federal prison over. Should that be found true, there is no doubt the unlawful terrorist BLM agency will be feeling the flames of justice burning, and searing through to their very core.

This compound will go down in history as the first time the militia have rolled into an FBI compound, requesting open dialog, transparency, and making it clear they are there to enforce peace for both sides, no violence will be tolerated. This is the “Shot Heard Around the World” without a bullet being fired. As MSM slept through one of the most historical days in the history of our union, we the people remain diligent in the fight to restore our republic.

I am thankful to all the patriots that are standing up for what is right in the face of government terrorism, oppression, and tyranny. I am also thankful to the individual FBI agents on scene that appeared to be listening and allowing a dialog to begin between the people and their servants. While the FBI stated they do not want any violence, only time will tell if they are sincere or not. It should be duly noted the FBI clearly stated Sheriff Ward was the one who had the authority to make them leave, or continue to have them stay which is what Ammon Bundy has been saying all along. A special thank you to Mr. Santilli and other independent media that have been tirelessly covering the truth and recording history, without them I have no doubt this historical event would have never been known and history lost.

God Bless all whom are in Burns, Oregon you are in our prayers.

Here are some photos from the event.