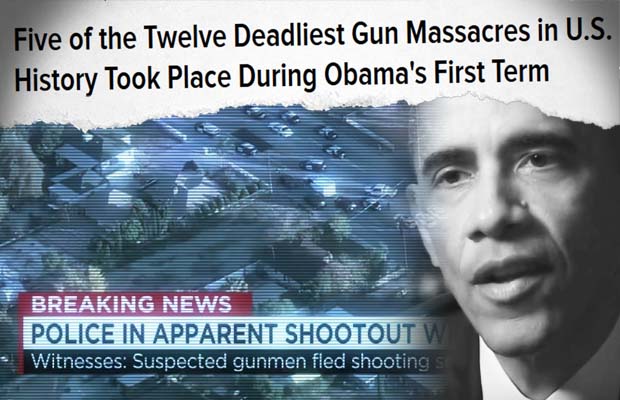 Ask yourself this: how much of what you see in “the news” in a given day is real?

Last week was an insane welcome to President Obama’s new gun control executive actions. To put it in perspective, let’s take a look at the week’s events which helped transition it.

On December 31st, outgoing Education Secretary Arne Duncan gave his last speech at St. Sabina’s in Chicago. He tearfully spoke of guns killing children throughout his tenure. In fact, the majority of his speech was about gun violence, not education (watch this). In his talk, he mirrored Obama’s frustration at the lack of meaningful gun control measures and reaffirmed that Obama has vowed to do everything he can in his remaining year as president to further this effort. Just as Obama has repeatedly done, Duncan praised Australia’s strict gun control policies, which many have called out as coming after the nation suffered a gun control false flag, as a “gift” to its nation’s youth.

Announcement was all over the news that Obama would be announcing his newest attack on the 2nd Amendment. The White House released a fact sheet on the new executive actions. Among these are:

Obama gives a tearful press conference on his orders, tears which quickly become top headline everywhere. Most mainstream outlets start with lines like:

President Barack Obama paused to wipe away tears as he discussed the victims of 2012 Newtown shooting during a Tuesday morning press conference on his new executive actions aimed at curbing gun violence.

Just after he tears up and before everyone breaks into applause, Obama says, “and, by the way, it happens on the streets of Chicago every day.”

Ironically, 12 people were shot and killed in Chicago that same day, a city that has some of the nation’s strictest gun laws.

The same day, Hillary Clinton, who has also referenced Australia’s gun control in speeches and has said she will pass her own gun control executive orders if she becomes president, praised Obama, saying “I’m very proud of what the President called for this morning with his executive order. I was pleased because some of what he’d called for, I’d advocated for a couple months ago in the debates and in the campaign.”

The one-year anniversary of the Charlie Hebdo attacks. A man walks into a Paris police department wearing a fake suicide belt, wielding a meat clever, and yelling “Allahu Akbar”. He is promptly shot by cops.  Charlie Hebdo dominates headlines for the first time in a year.

And advisory panel at Umpqua Community College announces the building where a mass shooting of nine people happened back in October will be torn down and rebuilt completely. Employees return to work at at the site of the reported San Bernardino shooting, and the friend charged with buying a gun in the case pleads not guilty. Both shootings are refreshed all over the news for the public, along with the announcement that James Tracy, a prominent proponent of the Sandy Hook shooting hoax theory, was fired from his tenured position at Florida Atlantic University.

Via The New York Times:

Mr. Tracy has said the Newtown massacre may have been carried out by “crisis actors” employed by the Obama administration. Mr. Tracy’s ideas fall into part of a larger movement of Internet conspiracy theorists who believe the spate of mass murders have simply been staged by the government. A few of the theorists do not think the shootings took place at all.

So, along with the San Bernardino and Oregon mass shootings refreshed in the public’s minds, Sandy Hook is also back in the news…

Never mind the fact that none of the executive orders Obama just passed would have stopped any of these mass shootings, (which all took place in gun free zones by the way), from happening.

The night of Obama’s CNN-hosted “Guns in America” town hall.

But before we get to that, it is reported an ISIS sympathizer named Edward Archer who had recently started hearing voices in his head and acting strangely, walked up to a Philadelphia police officer’s cruiser and opened fire on him with a stolen gun for seemingly no reason, shooting at the officer 11 times. The officer is hit in the arm three times and seriously wounded. Archer claimed he was “acting in the name of Islam,” and the Islamic State, although a leading Muslim advocacy group stated Archer “does not appear” to be an observant believer.

Jim Kenney, who is in his first week as mayor of the nation’s fifth largest city, said, “There are just too many guns on the streets and I think our national government needs to do something about that.”

Red State asks, “What is Kenney proposing? To disarm his police? Because that is the only way this could have been prevented.” Exactly. Because someone in possession of a stolen gun is obviously not someone that more gun control laws would have stopped.

Obama appears front and center at the gun control town hall meeting across from host Anderson Cooper. He awkwardly stutters through a direct question about gun control conspiracies that he is trying to disarm America that is unbelievable and tough to watch:

Obama attempts to laugh it off.

This comment from YouTuber rocketmunkey1 sums it up: “I love it when they pretend to oppose themselves to spark a false debate, it’s like when movies patronize their viewers by spelling out the plot in big capital letters with a contrived conversation between characters. I wonder if his awkward response is part of the script or just the fact he hasn’t got his auto-cue.”

…a highly publicized puppet show with a purpose…

To round out the week, a bizarre story takes over headlines about how a heavily armed man from North Dakota named Scott Stockert filled his car with guns and ammo (a 12-gauge pump shotgun and a bolt-action rifle, 289 rounds of .22 caliber long rifle bullets and 71 rounds of 12-gauge, not to mention a machete and a club) and drove to D.C. to kidnap the Obamas’ dog Bo.

Why? He’s apparently nuts. When Secret Service nabbed him, he claimed his name is Jesus and his parents are JFK and Marilyn Monroe… Stockert is a perfect way to round out the week’s gun control initiative, starring in Friday’s headlines as yet another dangerous, mentally ill man roaming the streets with far too much access to guns…

Finally, on Saturday it was reported that counter-terrorism officials began warning of a coming European 9/11:

“Unfortunately, I think 2015 was nothing,” a counter-terrorism official told AFP, adding: “We are moving towards a European 9/11: simultaneous attacks on the same day in several countries, several places. A very coordinated thing. We know the terrorists are working on this.”

Ask yourself this: how much of what you see in “the news” in a given day is real?

We live in a nation where the use of domestic propaganda against the American people has been officially legalized.

We live in a world where we rely five megacorporations for all the news and media that comes into our homes (and ultimately, our minds). Even though the Internet has opened the world up to us, and provided with instant communications, it has also insulated us, forced us to trust an untrustworthy, establishment media juggernaut for “news” on everything that is happening in our cities, our nation, and the world.

The script is being followed, its name, fear. “Be afraid, be afraid,” it screams daily, with the hope we will shake with fear and beg to hand over our rights in the name of that fear. Kinda makes you wonder who the real terrorists are, doesn’t it?