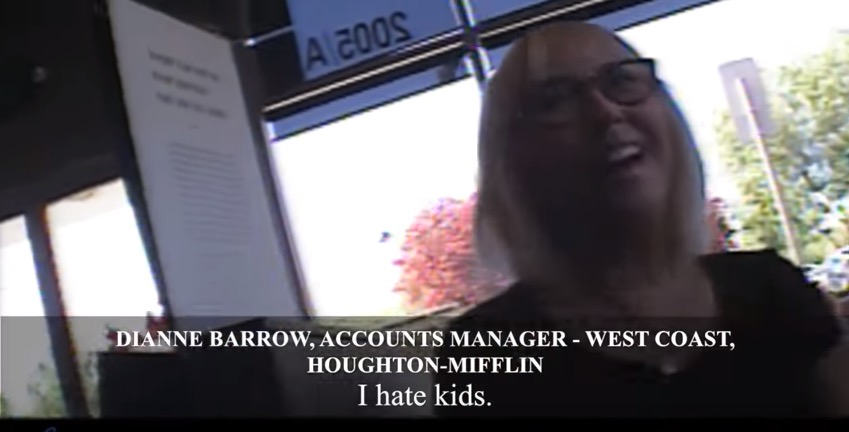 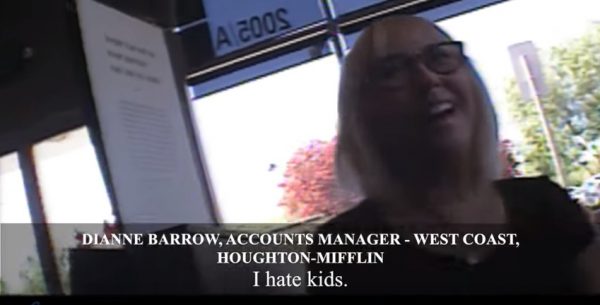 “Our video exposes how the book publishers are all about the money with no regard for the actual needs of our children. Corporate cronyism and underhanded political deals have contributed to Common Core’s massive disruption and the unraveling of America’s educational fabric. In upcoming videos in this series, we’ll continue to expose how taxpayer dollars are used with little accountability to enrich the major book publishing companies,”said Project Veritas President James O’Keefe.

However, though Barrow points out what insiders are in Common Core Curriculum for, she is no better. As an attempt is made by O’Keefe to push her as a woman who is “in it for the kids,” she responds with a laugh and says, “I hate kids. … I’m in it to sell books. Don’t even kid yourself for a heartbeat.”

Barrow also attacked presidential candidate Donald Trump, who has rightly referred to Common Core as a “disaster” that needs to be stopped, as well as homeschoolers and charter schools.

Trump is right on this issue of course, but since the Constitution doesn’t provide any authority for the overseeing of education by government, it could easily be done away with by eliminating the Department of Education. As for homeschoolers and charter schools, the first one is not worthy of criticism as parents are responsible for the education of their children (Deut. 6). However, charter schools are merely traps that are tied to government education with tax dollars. Ultimately, they are also unconstitutional and destructive to the Republic.

In a quick attempt at damage control, The Daily Mail sought out a statement from Linda Zecher, the CEO of Houghton Mifflin Harcourt.

Zecher said that her company “is as appalled by these comments as we expect readers will be.”

Apparently Zecher and her company are not as appalled at the nonsense that they put out in their books.

“These statements in no way reflect the views of HMH and the commitment of our over 4,000 employees who dedicate their lives to serving teachers and students every day,” she added. I ask, by providing such teaching as this?

“The individual who made these comments is a former employee who was with HMH for less than a year,” added Zecher.

The list of problems with Common Core is long and undistinguished.

However, it wasn’t just a former employee of the company that indicated that the company is all about the money and doesn’t really have the best interest of children at heart.

“It’s bulls**t and the thing is, what they do is they create some new f**king system, that f**king sucks to sell more books and then we have to learn something new with the students,” she said.

And parents actually let their kids be taught by a woman whose mouth spews this kind of trash?

O’Keefe told The Daily Mail, “This video provides confirmation that Common Core is broken, rotten and corrupt – including the textbook publishers, government education officials and the politicians who should be held accountable for enabling this system in the first place.”

“I hope and pray that ‘they’ call this an isolated incident, as we are putting every textbook publisher on notice that we plan to continue to release these videos exposing Common Core,” O’Keefe added.

Indeed, Common Core has been adopted in 42 states, as well as Washington DC, as curriculum for children in the public indoctrination centers called public schools and will be milking tax payers for millions, if not billions of dollars. Finally, it does nothing to actually educate children nor does it point them that their ultimate end in education is just like everything else in life, and that is to learn how they might glorify and honor their Creator (1 Cor. 10:31).

Courtesy of The Washington Standard.