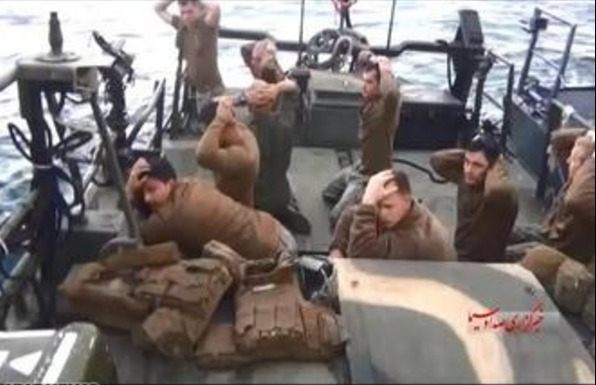 It was reported this week that a US boat with ten soldiers was captured by Iranian soldiers and then released, following an apology from their commander. Official Iranian video of the capture was released by the UK Times:

Now, there are a lot of details as to what may or may not have happened. In today’s age, one must be skeptical of everything, to a degree.

That said, in the series of events for this incident, as recounted by the UK Daily Mail, there is an official statement from the Iranian government which seems rather odd:

The sailors’ release came after Iranian state media said the U.S. apologized for unintentionally drifting into occupied territory. But the Americans have refuted the claim.

‘Our technical investigations showed the two U.S. Navy boats entered Iranian territorial waters inadvertently,’ the IRGC said in a statement carried by state television. ‘They were released in international waters after they apologized,’ it added.

The Navy have said they will be investigating what happened in a bid to determine why they were in that area of the Persian Gulf.

The soldiers were released without harm and seem to have been treated well by the Iranians.

The US has the most powerful navy on Earth. Our government has proudly boasted that we have satellites so advanced that we can use them to see “a dime on top of the Washington Monument.”

Yet, we somehow don’t know where an armed convoy with US soldiers is? Especially next to a country that our government has been talking about going to war against for almost 14 years?

I cannot say anything definitively because there are few solid facts available from all sides. Nevertheless, given our Government’s history of false flag attacks, including the murder of innocent American civilians to justify foreign war policies, one cannot help but wonder if our government was hoping the Iranian government would do to these soldiers what happened to American CIA operatives in Benghazi, in order to justify war with Iran. After all, we have them militarily surrounded on all sides:

Was it another Benghazi attempt? Was it a spy mission? There are more questions than answers right now. Regardless of what the actual story it, it is hard to believe that an armed military convoy from the most advanced navy on the planet just “happened” to “wander” into what it regards as very hostile territory.