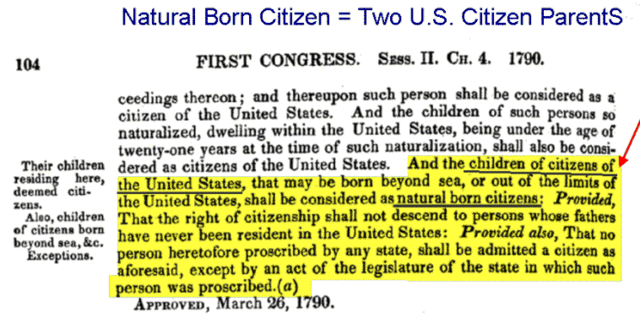 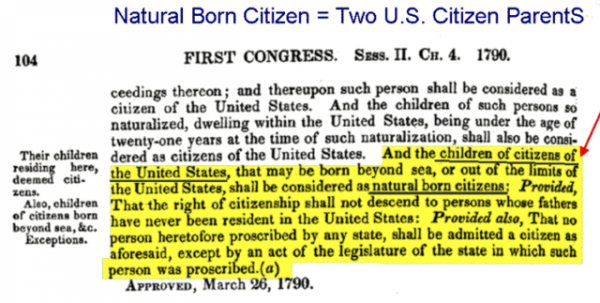 It is critical for U.S. citizens to understand the meaning of the Constitution’s term “natural born citizen” when choosing a prospective Commander-in-Chief. The candidate must be free from all possibility of foreign loyalties through either his or her parentage or place of birth.

Why is a narrow interpretation of “natural born citizen” essential to the future of our nation?

If it is sufficient for a person to have only one U.S. citizen parent in order to be considered a “natural born” citizen, then dual citizens could become President, including dual citizens of countries hostile to the United States.

Likewise, if the Constitution allows persons born outside the U.S. with only one U.S. citizen parent to qualify as President, then many persons could be dual citizens of their country of birth. This is Ted Cruz‘s situation. Such persons could have divided loyalties to their place of birth or to the non-citizen parent’s country of origin.

If it is enough for a person to qualify by being a “birthright” citizen who was born on U.S. soil to parents who are not U.S. citizens (Marco Rubio‘s situation), what if communist or radical Islamic nations use this as a strategy to infiltrate? Over a period of years, they could send refugees, students, or professors to the U.S. to carry out their plan. What if one of those immigrants has a “birthright” child, posing as pro-American until the time is ripe to seek the Presidency? The only way to stop such infiltration is a strict interpretation of the phrase “natural born citizen” which denies “natural born” status to children who are born in the U.S. to non-citizen parents.

Why did the Framers include the qualifier “natural born” in the President’s citizenship qualification? It is important to understand their intent.

John Jay, the first Chief Justice of the United States, sent a letter to George Washington stating “Whether it would not be wise & seasonable to provide a … strong check to the admission of Foreigners into the administration of our national Government; and to declare expressly that the Command in chief of the American army shall not be given to, nor devolve on, any but a natural born Citizen.”

Justice Joseph Story noted in his 1833 Commentaries on the Constitution that “the purpose of the natural born Citizen clause was thus to cut off all chances for ambitious foreigners, who might otherwise be intriguing for the office; and interpose a barrier against those corrupt interferences of foreign governments in executive elections.”

The qualifier “natural born” was thus added to the eligibility requirement for the President to prevent the Commander in Chief of the Armed Forces and Chief Executive of the United States from having foreign allegiance, dividing their loyalty.

Although the intent of the phrase “natural born citizen” was clear at the Constitution’s signing, we now live with the consequences of ignoring the Framer’s definition – a sitting President who is ineligible. No one disputes that Barack Obama’s father was not an American citizen. According to the Framers, this fact alone makes Obama ineligible to be Commander-In-Chief of the armed forces. Furthermore, his father was on record as being hostile toward the U.S. and our ally, Great Britain. In Dreams From My Father, Barack Obama, Jr., opined his father’s beliefs. By his own written words, Obama’s loyalties are divided, just as the Founders warned.

At some point, the citizens of this country have to insist on the rule of law. We must adhere to the Constitution, the legal foundation on which all our laws rest.

How can we trust as our national leader, a man who lies when he takes the oath of office to “preserve, protect and defend the Constitution,” while knowing full well that he has violated the Constitution’s natural born citizenship requirement? Barack Obama’s lawless regime was built on the illegal foundation of his ineligibility to be President. We should expect nothing different if either Cruz or Rubio are sworn into office.

The Constitution has been ignored and misinterpreted for so long that our nation has been “fundamentally transformed” into something far removed from what the Framers intended. We are dangerously close to losing our Republic.

WE the PEOPLE can take a critical step toward restoring the rule of law if we reject Rubio and Cruz as eligible candidates on our states’ ballots and refuse to vote for them in any primary election or caucus.

Tragically, the Democrats made history in 2008 by failing a crucial test. One state Democratic Party certified Obama as “eligible” under the Constitution, and the remaining 49 state parties removed the nominee eligibility certification statement altogether.

Now the conscience of each state Republican Party will be put to the test. Will they follow the lawless actions of Democrats? Or will they follow the Framer’s instructions in the Constitution and declare Cruz and Rubio ineligible?

Evalyn Bennett is a Christian tea party patriot and secretary of the Lemhi County Tea Party in east-central Idaho. She earned a B.A. from Dartmouth College in 1983 and a M.S. Ed.in Counseling Psychology from the University of Kentucky in 1986. She has worked as a college career counselor and technical writer-editor, and home schooled her three children (two are now young adults). Evalyn resides with her husband and their teenage son on a small horse farm. She serves her rural community through volunteer work at church (playing the flute and teaching Bible studies), 4-H, and a therapeutic riding program.