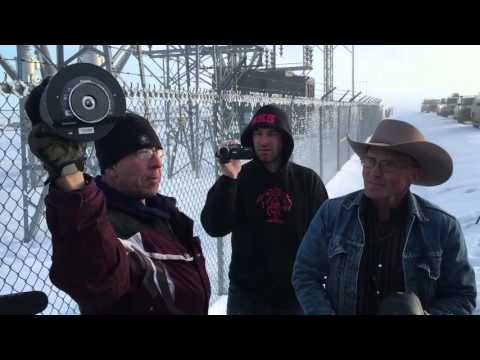 LaVoy Finicum and others disassembled and took down a surveillance array as members of the press looked on.

“Woooo! Let freedom ring,” one voice shouted as an armed man climbed an extension ladder propped against a power pole to remove the unit which was hooked to the power grid.

While holding the uninstalled camera in his hand, Finicum told the press:

“They come and said they puttin’ up cameras up there and so he said, ya know, I’m tired of the surveillance state and we’ll take them down and they can take them back to Washington D.C. and go use them somewhere to protect their nation and their borders like they should and not be spying up upon the citizens in the state and this county.”

Another protester was filmed holding the uninstalled camera while passionately saying:

“When you take this Mac address you are going to find that it’s Department of Homeland Security or the FBI–or some entity as such–in your community mounting surveillance cameras without your knowledge. How do you feel about that folks”

“Wow those are nice cameras,” the man continued to say, as another was tossed from the pole.

While the men are trying to inform the local community that the federal government is spying on them, removing the ‘federally owned’ equipment bay prove to be another mistake.

Meanwhile, back at the local makeshift FBI command base, located at the Burns Airport, agent had another issue to contend with as a group of peaceful protesters gathered out front.

It’s also important to note that despite the fact that the local Sheriff’s Department was requested to attend the protest to maintain safety, the department failed to respond, leaving the citizens to deal with the FBI face to face.

During the confrontation the FBI considered the protesters First Amendment rights to be a ‘threat’.